When Mercedes thought coming to France might flatter their car, Friday’s practice and Saturday’s qualifying didn’t confirm that notion and it became clear that it would take some luck or attrition ahead of them in order to score a podium finish. That’s exactly what they got with Ferrari’s Charles Leclerc crashing out of the lead on lap 18 and Carlos Sainz starting at the back of the grid due to an engine change penalty.

Max Verstappen’s Red Bull looked as if it was struggling to find a weakness in Leclerc’s Ferrari with regards to tire wear/degradation and he settled in for an earlier pit stop to take the long-game approach to the race. In the end, he didn’t have to engage in that fight as Leclerc made an error that left him in the wall and Max on the top step of the podium. The absence of two Ferraris meant that Mercedes mugged Red Bull’s Sergio Perez to take the remaining two podium slots with Lewis Hamilton leading George Russell.

A win for Red Bull but the traditional notion that Ferrari might be harder on its tires in race pace didn’t have time to reveal itself. For the first 18 laps, Leclerc looked as if he was on top of the tire management game keeping Max in second but once the Ferrari hit the wall, Max took command of the race, set the pace and managed his tires on a one-stopper for a win by over 9 seconds. Max nos has a comfortable 63-point lead in the championship as does Red Bull with an 82-point lead in the constructor’s championship.

A big win for Mercedes and the first double podium result of the season thanks to the absence of two Ferraris. Despite that, reliability and mistake-free racing is part of F1 and capitalizing on those issues is what it’s about. Mercedes didn’t have the pace on Friday or Saturday but the key take away is that their race pace is strong and they have made significant progress in development. Lewis took 2nd place with George Russell in 3rd. They’ve closed the constructor’s race to just 44 points behind Ferrari. Is that a sign? Lewis’s number seems pretty lucky.

A win for Ferrari’s Carlos Sainz who started at the back and drove into the points in 5th. I understand the criticism about boxing Carlos late but the team have much more data than we do and their data suggested his Medium compound tires were running out of life. They determined that if they had left him out, they would not have been able to secure 5th place let alone nab a 4th. IT was a safer strategy but with Charles out, they didn’t want to gamble.

A win for Fernando Alonso with a 6th place finish and his teammate, Esteban Ocon in 8th. They were hassled all day long by another team who also had a win with McLaren’s Lando Norris in 7th and Daniel Ricciardo in 9th.

There was a lot going on up front but Alex Albon had a nice run to P13 and that’s a good result for Williams.

A fail for Ferrari and Charles Leclerc. First Ferrari’s reliability issues meant Carlos started at the back and this took him out of the equation as a buffer to Red Bull. Then Charles pushing hard put it in the wall and this means that he loses a load of points to Max in the driver’s championship. Ferrari still seems to have issues with strategy and reliability that Red Bull have capitalized on by keeping their head down and running solid, tactical and fast races. As Charles said, he can afford no more mistakes and I would add that Ferrari can afford no more strategy or reliability issues if they want to beat Red Bull.

A fail for Sergio Perez who was off all weekend long compared to Max. While you might understand that Sergio’s qualifying hasn’t been his strong point, he did manage to qualify very well but in the race he was unable to mount an attack on Lewi sHamilton or hold off George Russell and seemed to have been caught sleeping on the restart after a virtual safety car session. UPDATE: According to the FIA, there was some sort of glitch with the VSC and this caught Sergio out so he wasn’t sleeping at the wheel. “

“A second VSC ending message was sent due to a hardware issue, which led to an automated switch to backup systems that worked exactly as they should in that scenario.

“The same information is supplied to all teams concurrently. The VSC ending countdown time to the green light being displayed on the trackside panels is always random.”

A fail for Haas F1, Alfa Romeo and Alpha Tauri who all struggled to find pace in France and finished well out of the points. Along with some broken wings, body parts and retirements for Yuki Tsunoda, Kevin Magnussen, Nicholas Latifi and Zho Guanyu.

A WTH for all the talk about 85 degree weather (29c) as if it is the apocalypse. That’s an average summer day where I live with 80% humidity. I understand the track temps are 140 degrees (60c) but this isn’t the first time F1 has raced in hot weather.

I’m not sure what’s going on with Lance Stroll but his yelling at the team to leave him alone was a bit terse. If I were a team member trying to support his race, I’d get tired of that attitude pretty quickly given his performance on track. How much patience do teams have for drivers like Lance or Yuki?

Not quite sure why Sky Sports were taking a blunt object to Ferrari without knowing all of the details. Simon, Johnny and Nico kicked the poop out of Ferrari post race and I think it would help to get a better understanding of the data and situation before beating a team bloody. Mercedes has made some dramatic errors and I can’t recall them saying that Toto needs to fire his strategy team and make changes. Maybe they have, I just don’t recall it. 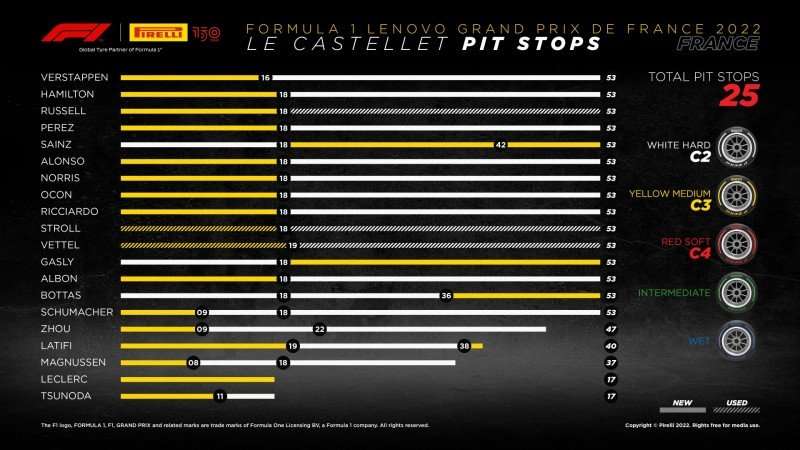 Sky has been doing hatchet jobs for years. Ted was doing it with notebooks about Massi leaving F1. The temperature remarks were a bit silly as its South France… Tow Todd we know Mo gets hotter weather, but yall wouldn’t be so cool without AC. Europe has had record breaking heat waves recently. And we don’t have AC.

Indeed. No AC makes life a lot more challenging with temps in those ranges. Although my parents, grandparents and relatives had no such thing and in 1936, there were over 30-40 days with temps above 100 F in MO. Comes with the territory. Our sun room has no AC so these summer days sitting there, the ceiling fan comes in very handy. :)

How about an honorable mention fail for Ferrari strategy. Seems at first they don’t know if they want to bring in Sainz, then they say definitely stay out, then just as he is fighting for position they tell him to pit.

Is it me or Russell turning in a bit of a whinger?

Pretty good race, despite the course. Ferrari once again snatches defeat from the jaws of victory. Look, I’m not sure if those tires would have made it to the end. Ferrari obviously didn’t think so. But even if you take a look at things on its face, there’s really no reason for the stop. His Carlos’ pace was such that he was pulling away from the cars in 4th 5th 6th place, not to mention the changes of safety cars and VSCs. Even if on paper the tires wouldn’t have made it, variables could and did enter that could have… Read more »

You have to fear for Ferrari and Charles. This should be their season but it seems Ferrari have forgotten what it takes to lead the pack. Unless there is some wonderful upgrade incoming, the season is over in term of the title.

I appreciate the defenses of Ferrari, LeClerc is my favorite, but you’re forgetting their best move of the day – having Sainz’ pit stop done in plenty of time and holding him three seconds so they could release him into the Alpine. Defend this, explain away that, but look at their season as a whole and you can see why Italy can’t compete on a global level in anything. They’re just chaotic and subpar and the world has passed them by.

Previous article
Leclerc towed to Pole for French GP
Next article
Ferrari taking heat for Sainz strategy call
I thought this was a good race and all of the narratives heading in tot he weekend were unraveled via errors, mistakes, reliability issues and attrition which made for an entertaining race. Race Report: Verstappen wins French GP