With a threat of rain in the air and much cooler air and track temperatures, The Formula 1 Hungarian Grand Prix evolved into a battle that evicted from most predictions—including my own fantasy GP picks.

Ferrari looked quick on Friday and it seemed like a track—Monaco without the barriers—that the Italian team would excel at. Come Saturday and Sunday with cooler temps, Mercedes pulled a pole position out of their hat and ended up capitalizing on Ferrari’s lack of pace and strategy errors on Sunday.

Perhaps equally surprising—and maybe not so so surprising—Max Verstappen managed to make the most of his team’s brilliant strategy calls to come from 10th place to victory followed by Lewis Hamilton and George Russell’s Mercedes leaving both Ferraris on the doorstep of the shop three steps.

A big win for Red Bull and Max Verstappen. With no help from a struggling Sergio Perez, Max had a lot of work to do given the qualifying position he was relegated to due to an MGU-K issue on his final attempt on Saturday. To recover from 10th via a strategy that put Ferrari, and to some extend Mercedes, on their back foot, Max used the undercut superbly and delivered rapid in and out laps to gain enough lead to cover an unforced error spin on lap 41 and still win.

A win for Lewis Hamilton and Mercedes. Sure, George Russell did the heavy lifting but he was running a different race and his strategy was defending the lead early on but this left Mercedes to cover Ferrari with Russell and cover Max with Lewis. The strategy they deployed for Lewis—which is what Ferrari should have done by running Charles Leclerc long—worked a treat and allowed Lewis to climb past his teammate and into P2 with a terrific drive. Mercedes has to be pleased with their performance gain and hoping for cool temps in the second half of the season.

A win for Lando Norris who managed to stay ahead of Fernando Alonso and keep the battle between McLaren and Alpine alive finishing P7.

Also a win for Sebastian Vettel who managed to pip his teammate, Lance Stroll, for the final point on the grid.

It’s hard not to view Ferrari’s race as a fail. Red Bull called and early stop for Max on lap 16 and Ferrari answered but they did so by fitting another set of Mediums for both cars—Sainz on lap 17 and Leclerc on lap 21—which meant, clearly, they were on a 2-stopper and everyone knew it. What was odd is that they tried to cover the undercut again on the Hard compound for Leclerc instead of at least running long on the Mediums—like Lewis did—and then change to softs for the last 15 or so laps. It may not have worked for the win but at least it would have given them a shot for the podium and kept them ahead of Mercedes who is now breathing down their neck in the constructor’s championship. Admittedly, Carlos Sainz tried that and it didn’t work out but in the end, they shouldn’t have been in that position to begin with. The late stop for Leclerc was public admission of a failed strategy call and that is not a good look for Ferrari when you are competing at this level. All personalities aside, Ferrari have to make changes to their strategy team.

A fail for Sergio Perez who looked off the boil all weekend long drawing the ire of boss Helmut Marko saying he was already on summer vacation. It’s a drop in form over the last two races and Sergio needs to pick up the pace to be able to at lease give Red Bull more strategy options at the sharp end of the grid.

A fail for Daniel Ricciardo for punting Lance Stroll after doing a great job of passing both Alpine’s on lap 29. Having both McLaren’s ahead of Alpines is what the team needed but not what he delivered.

With regards to Ferrari, I think they believed the Hard would be slower for 10 or so laps but would come into its own and since there were 30 laps left, they felt it was the right call. The reality of it is, Ferrari just lost pace in the cooler temps to Red Bull but regardless, the tire choices were not right. I think Charles Leclerc is still trying to understand the call.

Speaking of Alpine, Esteban Ocon’s focus on beating Fernando Alonso isn’t helping the team. He was very intent on keeping Alonso behind him on lap 29 that he balked the Spaniard allowing Ricciardo to pass them both. Their prime target, McLaren, was allowed by as he blocked Alonso. Not a good look.

What happened to Yuki?

Is George Russell “The type of guy who…get’s the #2 driver strategy?” Asking for a friend. To be fair to Mercedes, George was running and covering a different race from Lewis but I will say that Toto’s actions when Lewis passed George and the words he chooses to use about George’s performance would give me reason for pause if I were George. Let’s just say I would be keeping my options very open with Red Bull, McLaren or even Sauber if Audi buys them. 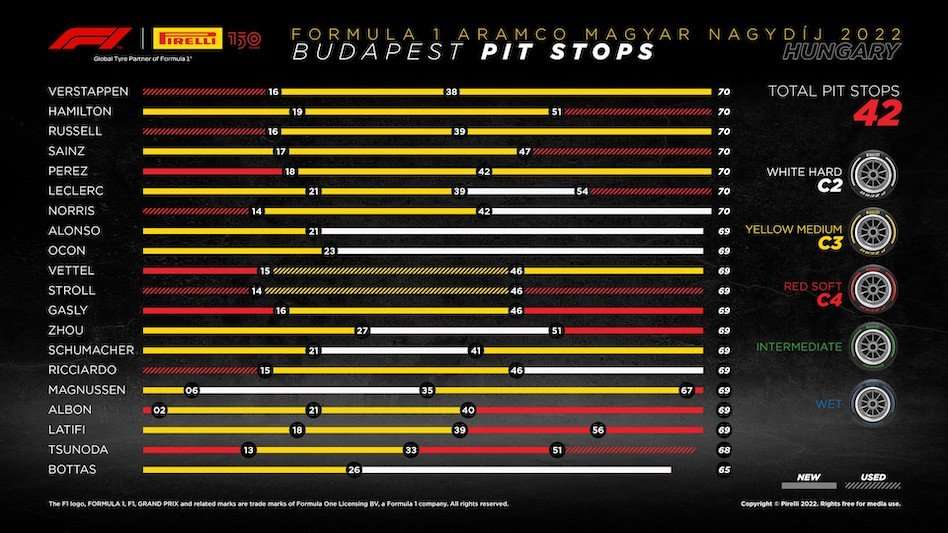 Do you think Russell’s strategy was comprised by his slow stop?

I agree with your thoughts on Toto, although I think Mercedes is still the best place for George. To be fair Lewis’ driving has improved in the last 5 races.

I can see them having a resurgence in the second half of the season.

No doubt, Lewis has turned it around. He’s driving very well now and that’s a handful for any teammate to deal with. I think the strategy split favored Lewis given his position and the Mediums and I know Lewis didn’t like starting on them but the way everything played out, it worked a treat. For George, he was on Soft and then Medium and it limited his options as he was covering Ferrari and trying to hold the lead. I don’t thin the strategy favored one or the other, it’s just the way it played out and you can’t discount… Read more »

You pointed out that Russell’s strategy was to support Hamilton, then why did he not pull over and let him by. Was that a reward to see if could hold him off? Russell is ahead of Hamilton in the championship. Is it that Hamilton is no longer #1? Is Hamilton on his way out of MB? I don’t know, just asking dumb questions.

I think Merc has two cars in very good position and they use George on Softs to try to protect his lead and cover Ferrari and I think Lewis, while he wasn’t crazy about starting on Mediums, had a better strategy given the way the race played out. Just as Red Bull would use both Max and Sergio’s strategies to support one or the other during the race, I think as George lost lead, they could use him to keep Ferrari’s guessing and this allowed them to bring Hamilton up. I’m not suggesting they sacrificed him for Lewis, but that… Read more »

I made a comment after Austria that Charles won in spite of Ferrari….

For Max he must be loving this year, after the epic battle of last year everyone is literally moving out of his way for title no.2.

Yeah I made a comment that Ferrari are idiots. People didn’t like it and I respect that, it’s important to be nice and I was overly harsh. Sadly though, Ferrari ARE idiots.

What did Toto say about George? I missed it.

I was wondering how Ferrari would balls up this opportunity, and to paraphrase Ian Malcolm in Jurassic Park, Ferrari finds a way.

I just watch very closely the body language and comments that Toto makes with regards to George and Lewis. If I were Lewis, I would be sensitive to that too for his sake.

Yeah, he certainly still favours Lewis to George, I just thought that he may have actually said something about it.

Carlos and Lewis made MMS work, why would Ferrari think it wouldn’t for Charles?

Smithers: Umm, sir, Leclerc and Ricciardo have been running great and made stunning passes on their competitors…

More bizarre behaviour from Ferrari and underlines you can have a great car and talented driver but it’s a team sport and everyone in that team plugs into success. At the moment, a couple of spark plugs seem to be faulty.