Despite their win in Bahrain, there were still lingering questions about the actual pace of the Mercedes versus Red Bull. What amounted to terrific tactics securing the Mercedes win in Bahrain, it looked to be a reversed opportunity for Red Bull with Sergio Perez and Max Verstappen on split strategies.

With Lewis Hamilton on pole and his wingman, Valtteri Bottas mired down in 8th, he had no teammate to fight off the Red Bull duo so the champ was exposed. In the end, none of that mattered as rain came at the start of the race and created a changing-conditions race that threw all strategy in the bin.

In the end, it was a win for Max Verstappen, his 11th, with a fantastic recovery drive for Lewis Hamilton, who benefitted from a red flag session due to his teammate’s crash with Williams driver George Russell, came him in 2nd. McLaren’s Lando Norris had a fantastic drive to complete the podium.

A win for Red Bull and Max Verstappen who claimed his 11th win with a great start to take the lead on Inters and hold off the Mercedes of Hamilton to take the win. The changing conditions were tricky and the team made the switch to Medium compounds at the right time while covering Mercedes strategy.

It’s a win for Lewis Hamilton and Mercedes who kept their heads despite and unforced error when trying to pass back markers that lost them a lap. The red flag un-lapped Lewis and he stormed back to second with an incredibly inspired drive. His fastest lap point keeps him in the championship lead.

A win for Lando Norris who had a terrific weekend and despite his 7th place starting position, he was much quicker that his teammate, struggled early on but managed to make the most of the red flag restart with soft tires and run to the podium. A key performance as both Ferrari’s were hounding him and McLaren look set for a fight for best of the rest with the Scuderia.

A win for Ferrari with Charles Leclerc and Carlos Sainz in 4th and 5th. Carlos made several mistakes early on while pushing hard but recovered from those mistakes to finish on the tail of his teammate. For Charles, he looked set at the beginning of the race but the red flag didn’t work in their favor as it left him vulnerable to Lando’s McLaren.

A win for Lance Stroll who struggled on the formation lap with brakes that were on fire. The team managed to repair the brakes and he ran a strong race in 7th while his teammate, Sebastian Vettel, suffered the same issue and had to start from the pit lane.

A fail for Valtteri Bottas who struggled all weekend long and could not make his way forward, like Lewis did, for a recovery drive after a challenging qualifying session. Bottas was then involved in a crash with George Russell with both pointing the finger at the other.

A fail fo rSergio Perez who qualified 2nd and steadily went backwards. The king of tire management may be good on tires but changing conditions was not his strong suit on Sunday. A few unforced errors and penalties left him adrift and even when he benefited from the red flag to get back in the top 4, he ran off again and spoiled his race finishing 12th.

A fail for Williams who saw both their cars out of the race. Nicholas Latifi managed that all on his own with a spin into the wall and George Russell had a collision with Bottas that ended his race and he was heading for the points.

While no one had aspirations of points, with the attrition and red flag, you never know. That’s why Mick Schumacher had a bad day as he spun on lap 4 and the pit lane was closed. It cost him time and left him at the back.

Not sure what Yuki Tsunoda wasn’t understanding about track limits but was shown the black/white flag and given a 5s penalty for continually ignoring them.

While Pierre Gasly finished 8th, it was a tough race as the team had him on full wets and waited, seemingly too long, to get him on to Inters. Esteban boxed early to get his full wets off and one might think this would have been the right move for Gasly too given his pace. 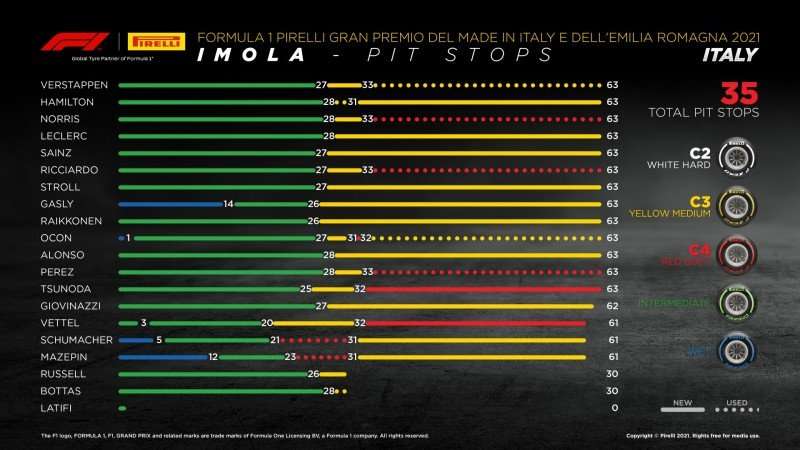 How ridiculously lucky is HAM? He spins and ends up a lap down, but then BOT and RUS crash into each other at speed and bring out the red flag, so he gets to unlap himself before the re-start, and then simply drives to 2nd place… (It reminded me of Crash Gate, Merc crashes and Merc benefits… Yes, I know it’s a stretch…) In my mind, this just seems so unfair to the 6 drivers, who were in front of HAM after he spun (and did not spin off in the wet themselves due to an unforced error) but ended up behind… Read more »

Here’s a quandary: If Hamilton was a lap down when the race was restarted – even if he “gained” (gifted) those 75 seconds as a freebee – he was STILL A LAP DOWN… meaning at the end of the race he had NOT completed 63 laps. Do the math.

Was he a lap down? Didn’t they release him in the pit lane to unlap himself? Although he should have ended up at the back of the field then, so not sure what happened either.

Yes, you’re right, if the race had not restarted, how can the drivers unlap themselves…

Couple of small changes: Latifi didn’t spin into a wall. He span off the track and recovered into the path of Mazepin who then span him into the wall.
The second isn’t a correction really. Just the irony that Schumacher had to do the extra lap because the pit lane was closed while they cleared up the debris that he himself left at pit exit.

indeed. he did not hit the wall :)

Previous articleHamilton takes pole from Perez for Imola GP
Next articleImola GP Review | The Parc Fermé F1 Podcast Ep 728
Race Report: Verstappen wins Imola GPI enjoyed the race and there were enough donkey awards to go around. It at least showed us that the fight for the title may be closer than it has been in 7 years and that's a good thing.