The Japanese Grand Prix turned out to be one of Formula 1’s Sprint-style races as the rain truncated the the total race time to just 30+ minutes. The race initially tried to start but the rain and spray coming off the cars on the initial lap were daunting and Carlos Sainz hydroplaned into the wall bringing out the Safety Car and the red flag.

After a very long delay waiting for the rain to lighten, the total race time clock of three hours began ticking and once the race did resume, there was enough time for 28 laps to be ran. As the race was a resumed race, full points were awarded, which created some confusion as many thought a reduced points tally was on offer but the regulations became clear and applicable when Ferrari’s Charles Leclerc was handed a 5s penalty for running wide on the last corner and gaining an advantage. This dropped Charles to third and secured the championship for Max.

Max dominated the wet Suzuka circuit with a 27s lead over Charles Leclerc when he crossed the finish line. Charles initially claimed second with Sergio Perez in third but having cut the chicane on the last lap and gaining an advantage, he was handed a 5s penalty which elevated Perez to second and dropped Leclerc to third.

A huge win for Max Verstappen who dominated the truncated Japanese GP with a commanding 27s lead over the entire field in just 28 laps. Max’s season was capped by a terrific drive in Japan and secures his second world championship.

A win for Sergio Perez who applied a tremendous amount of pressure on Charles Leclerc on the last lap causing the error which demoted Leclerc to third handing Verstappen the title. After a win in Singapore and a second place in Japan, Sergio is having a terrific season and now sits 2nd int eh Driver’s Championship standings.

While he may have ran wide and dropped to third, Charles did have a really good race and tried as hard as he could to prevent Max from claiming the title in Japan. With one Ferrari out, Charles did a good job of delivering much-needed points for Ferrari with Mercedes on their heels in the construction championship run.

A win for Alpine and Esteban Ocon who managed to hold Lewis Hamilton off for the better part of the race taking 4th place with Fernando Alonso coming home in 7th. Both Alpine finished ahead of McLaren and pull ahead of them by 13 point sin the constructor’s championship run. It’s hard enough driving int he rain but holding off a 7-time world champion who excels in these conditions is no easy task and Esteban did a terrific job.

A win for Nicholas Latifi who was one of the first to dive in for intermediate tires and then hold on for dear life to come home in P8. A good points result for Williams and perhaps a parting gift for the Canadian as he exits F1 at the end of the season.

A win for Sebastian Vettel, who loves the Suzuka track, who spun and dropped to the back on the first lap but after the restart, he switched immediately to inters and made his way up to P6!

A fail for the FIA who managed to bring a tractor on track before all the cars had been either slowed or exited the track. After the tragedy of 2014 at Suzuka, you would have hoped a lesson was learned. Also a fail for Pierre Gasly who was driving very fast under double-yellows.

A fail for McLaren with Lando Norris and Daniel Ricciardo in 10th and 11th respectively but they were behind both Alpine’s and this dropped them 13 points back in the chase to be “best-of-the-rest”.

Not sure what was happening with Alfa Romeo but finishing down in 16th and 17th was a bad day at the office.

I understand that when it becomes a timed race, we are watching a clock but could F1 also please include the lap count int eh on-screen graphics? I still care about which lap they are on. Good grief! 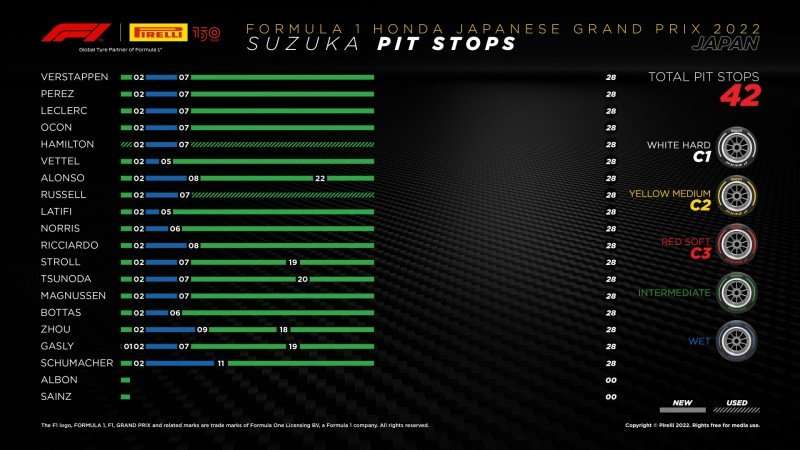 Red Bull’s Max Verstappen qualified on pole in dry conditions and was able to convert that advantage into the lead on the Cinturato Blue full wets. He pitted a couple of laps after the re-start for Cinturato Green intermediates, at the same time as his pursuer Charles Leclerc (Ferrari) and re-emerged in the lead – which he maintained to the end after 28 laps.

With such a short race starting behind the safety car in wet conditions, there was a clear-cut strategy that left little room for variation. However, some drivers initially stayed out on their full wet tyres while the majority pitted for intermediates after the start – hoping to gain track position and take advantage of any potential safety cars. This didn’t materialise though, with all the drivers apart from five stopping just once. The highest-placed two-stopper was Alpine’s Fernando Alonso in seventh.

At the first start, the way that Max went around the outside of Charles at the first corner, pretty much showed how confident he is in that car. He was never going to be stopped this season.
Well done to him.

I would add a FAIL to Carlos Sainz for causing the red flag. While he has shown moments of brilliance, I am beginning to second guess his selection for the second seat at Ferrari.

So, if cars where immediately able to go to intermediates after the red flag ended, then does that mean that any full wet weather is to hazardous to race in?