Perhaps there isn’t a lot of passing at the Monaco Grand Prix but the drama was certainly present over the balance of the weekend. No matter how maligned the streets of Monte Carlo are from fans or drivers, I love Monaco not matter how processional it may be.

Coming out of Friday’s practice session, you could see the narrative coagulating and it was Ferrari quicker than any expected, Red Bull struggling slightly and Mercedes finding it difficult to get Lewis Hamilton comfortable in the car.

The drama of Qualifying with Ferrari’s Charles Leclerc on provisional pole and then crashing to end the session was intense indeed as his teammate, Carlos Sainz, along with Mercedes driver Valtteri Bottas and Max Verstappen all felt they were headed for pole.

In the end, Max drove a measured race to take the win with Carlos Sainz delivering on Ferrari’s Monaco pace followed by a terrific drive from Lando Norris in third.

A big win for Red Bull and Max Verstappen. Max seemed to struggle on Friday and was not happy with his car but the team did a good job of getting it sorted and finding the pace that many believed the car had as they were the favorites for Monaco. Sergio Perez also recovered from a tough qualifying to finish 4th and deliver much-needed points for the team.

A win fo Ferrari’s Carlo Sainz who was upset about not getting his final run in qualifying but he was able to pick up the pieces of a troubled day for Charles Leclerc and deliver on they true pace in Monaco and give the team a boost for all their hard work.

A big win for McLaren’s Lando Norris who gave the team their first podium at Monaco since 2011. Lando did a great job and minimized the points damage that Ferrari were able to do with Carlos in second.

A big win for Sebastian Vettel and Aston Martin with a fantastic overcut of Pierre Gasly and Lewis Hamilton to take a solid 5th place with Lance Stroll in 8th.

A win for Pierre Gasly who drove a fantastic race to come home in 6th for Alpha Tauri. His teammate, Yuki Tsunoda, had never driven the streets of Monaco so finishing in 16th is possibly understandable but Pierre manage to gain points and give the Red Bull empire an even better weekend.

A fail for Mercedes who struggled all weekend long. They knew Monaco would be a tough bid against Red Bull but what they didn’t figure was that not just Red Bull but Ferrari, McLaren and Alpha Tauri would beat them. Despite Lewis Hamilton taking the fastest lap point, he was very frustrated with the team on Saturday as well as Sunday and things were even worse for his teammate, Valtteri Bottas, who DNF’d over a cross-threaded wheel nut during his pit stop.

A fail for Daniel Ricciardo who is still struggling to come to grips with his McLaren and was lapped by his teammate to come home in 12th.

Not sure what happened with Ferrari as they reported left drive shaft issues and not a gearbox problem. Hard to think that it wasn’t related to the crash but some initial reports suggest it may not be. Time will tell. 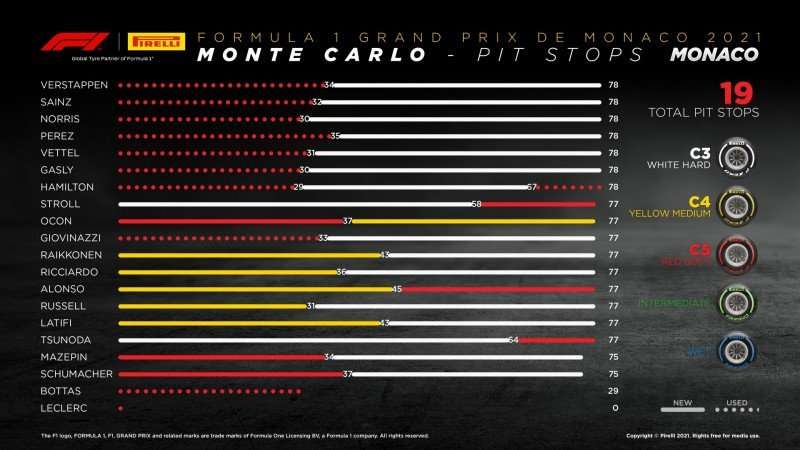 We have seen stripped wheel nuts before. So why has no one found a solution?

After I posted this I took some time looking at wheel nuts online, and these things are really complicated. The main design criteria is to be able to change a wheel within 2 seconds. Hat is off to the engineers and mechanics who get this job done.

as long as f1 punishes teams for crashing… Ferrari did not dare change the gearbox, 5 place penalty equals a loss, so they took a chance and failed. Another F1 bad rule gives us a false result.

What I don’t understand is why you don’t loose your fastest time if you bring out the red flag. I know there’s other race series that have this rule.

You mean if you crash you lose all the times you had? Gee, why not simply penalize drivers for some other infraction as well–wrong color of their socks? Look, for me this is simple: F1 has last its way. A driver, trying to eke out a fast lap at a circuit that has no run-off zone will hit something. We WANT them to try.If you add another penalty (like 5 place grid penality for breaking something – just plain stupid), they will have to give up trying. And F1 gets processional/boring over and over. It’s time we spectators told the… Read more »

Yes not a good time for chuck la chair