The Formula 1 United States Grand Prix entered it’s 10th year in Austin Texas and despite all the campy cowboy boots, hats and longhorn steers combined with the overblown ideas of what America is via marketing activation and events, there was a pall on the entire weekend with the passing of Red Bull co-owner, Dietrich Mateschitz.

Red Bull was on the cusp of winning the 2022 F1 constructor’s Championship and with the passing of Mateschitz, they were focused on delivering the prize for the team but they didn’t make it easy for themselves with a slow pit stop for Max Verstappen leaving a lot of work to do in reeling Lewis Hamilton’s Mercedes in and passing for the win.

In the end, Max led Lewis home with Ferrari’s Charles Leclerc in 3rd. It was a brief window for Mercedes who thought they may be able to claim their first win of the season but they settled for the fastest lap with George Russell boxing on the lap last for fresh tires.

A big win for Red Bull and Max Verstappen. On a weekend of such dire news regarding the passing of Dietrich Mateschitz, the team nearly lost the win with a slow stop for Max and he had to dig deep to recover and take the win with just a few laps remaining. It was an inspired drive to compliment an inspired season for the team despite the dark cloud of Dietrich’s passing and the ongoing controversy over the cost cap breach.

A big win for Mercedes and Lewis Hamilton with a terrific 2nd place at a track that Lewis loves. Mercedes thought they might get their first win and it would have been a great reward for their new upgrades and hard work this year to find and unlock the pace of their car. However, a 2nd place is still a great results as is the fastest lap. They also managed to keep the Ferrari’s behind them so that’s a good sign.

Maybe it’s not a win for Ferrari and Charles Leclerc but given his starting place in P12, a great recovery drive to the podium can’t be ignored. Charles wasn’t elated with the result but I think they did a very good job of it.

A win for Lando Norris who put on a great spectacle late in the race passing his way up to P6 and that’s important because he finished ahead of Alpine’s Fernando Alonso which is critical for the best-of-the-rest in the constructor’s battle.

A win for Fernando Alonso who at one point in the race was launched in the air and into the wall but managed to recover, get a new wing, and claw his way back to P7 in a drive that only Alonso could deliver.

Not the day Carlos Sainz wanted as his Ferrari was spun and out of the race at turn 1, lap 1. Carlos tried to pinch the corner and come back around Max on the inside at turn 1. George Russell diving down the inside hit Carlos as he turned hard back into the center of the track and clashed with Russell who got a penalty for the clash…which I think was a bit harsh as Carlos turned quite hard back into the track where George was.

A fail for Lance Stroll who qualified so well and was running well in the top 10 and threw it all away by flicking it left trying to block Fernando Alonso from passing him causing a massive crash taking his Aston Martin out of the race. A very late move and his onboard showed that clearly.

A bit of a fail for Sergio Perez who is battling Charles Leclerc for second in the driver’s championship and by finishing behind Charles, it isn’t helping matters. To be fair to Sergio, had a damaged front wing so perhaps that kept him just off the podium. Regardless, he’s now 2 points behind Charles with three races left.

Can’t tell you how disappointing it is to see the social media comments about the passing of Dietrich Mateschitz. Truly tragic and represented what is worst in sports fans.

It’s funny to watch a British broadcast do “America”. Their idea of what America, and in particular Texas, is can be a bit odd and campy if I’m honest. Someone should have stopped Lawrence Barretto from buying those boots and wearing them around with his skinny jeans.

If you are a Hollywood star and you are trying to make an F1 movie, snubbing the voice of F1 is not a good look. Brad Pitt shrugging off Martin Brundle is a bit odd. Surely his handlers need to do better research of who is who in F1 if they’ve already agreed to spend millions on making a movie about it. Let’s hope this isn’t Brad’s Joe onto moment.

The Alonso/Stroll crash needed a red flag to clean debris I think. Also, a VSC should have been issued for the mirror that came off Alonso’s car and sat on the track for several laps. Very dangerous. 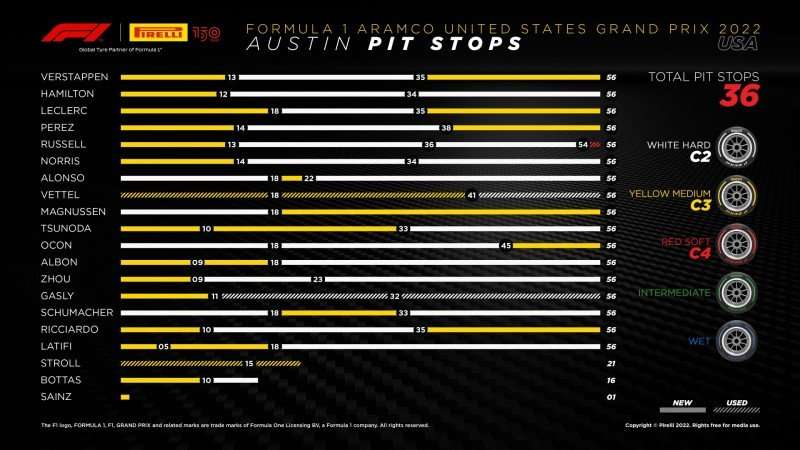 Red Bull’s Max Verstappen took the lead at the first corner, having started on the P Zero Yellow medium tyre – the same choice that was made by 16 of the 20 starters. Verstappen pitted for P Zero White hard tyres from the lead and then emerged back in front, shortly after Hamilton made a similar stop. Having survived two safety car restarts with his advantage intact, Verstappen made his second stop for another set of medium tyres 20 laps from the end, dropping behind Hamilton – on the hard tyre for the final stint – after a problem in the pits. Chasing down the Mercedes driver, Verstappen eventually won the race by four seconds after managing his tyres perfectly and sealing the 2022 constructors’ title for Red Bull.

Haas’s Kevin Magnussen was the highest-placed driver on the grid to start on the hard tyres (from P13) and was the only driver to stop just once, finishing in the points after completing a long 38-lap final stint on the medium tyres. Mercedes driver George Russell was the only driver to stop three times and use the P Zero Red soft tyre, which he fitted two laps from the end to claim an extra championship point for fastest lap.

I’m thinking that Ferrari needs to get a few tips from Alpine on how to build a more solid car.