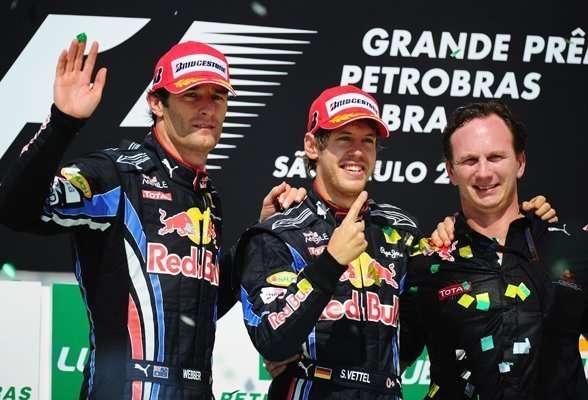 The Brazilian Grand Prix of 2010 may go down as an epic fail or a paragon of ethical and moral stoicism for Red Bull Racing. Having clinched the Constructorâ€™s Title this weekend with Sebastian Vettel and Mark Webber finishing 1, 2 respectively, the team also left a large gap between points-leader Fernando Alonso and Webber that could have been mitigated to one single point had they issued team orders and allowed Webber to take the victory from Vettel.

Much will be made of the fact that Alonso now leads the championship by seven points, the exact amount he earned for Ferrariâ€™s team orders incident in Hockenheim that saw a cash fine of $100,000 onlyâ€”no deduction of points. Red Bull boss Christian Horner was quick the heap scorn on Ferrari for their actions in Germany.

This team order issue, as instigated by Ferrari, has put Horner in a committed position of having disdain for issuing such orders in a series that bans them and for Ferrariâ€™s seemingly defiant breach of those regulations. Horner seems committed, as well, to waiting to the very last moment and mathematically eliminating any driver before issuing team orders. Noble? You be the judge.

Red Bull may have just handed the Driverâ€™s Championship to Alonso because Vettel needs to beat Alonso by 16 points in order to take the title while Webber needs 14 points. With Alonso’s current form and a newer engine for the final race in Abu Dhabi next week, this seems unlikely but not impossible.

So how will it play out? If Red Bull is dominant, as expected, in Abu Dhabi and they finish Vettel, Webber; Alonso wins the title. If they finish Webber, Vettel, Alonso; Webber will take the title by two points. If Alonso suffers a no-points finish and the race ends with Vettel leading Webber, the two drivers would be tied and Vettel will take the title as he has more victories by way of todayâ€™s Brazilian win (5 to 4).

Itâ€™s going to be interesting and thatâ€™s putting it lightly. Looks like those seven points at Hockenheim have come in pretty darned handy havenâ€™t they? Ferrari made the right call there didnâ€™t theyâ€¦even if it cost them $100,000.