Remembering Charlie; what next for the FIA?

A dark cloud hangs over the season-opening race in Australia. The shocking news of FIA race director Charlie Whiting’s passing has been a huge impact on the paddock as the FIA scrambles to fill the roles Charlie performed so the weekend’s events can take place.

Replacing Charlie is a nearly impossible job because Whiting was as close to indispensable as a person can get. An engineer who loved racing and was a pillar of the entire FIA regulatory process over F1.

I will never forget where I was when Charlie passed. I was in the middle of our 2019 season preview event at Pole Position Raceway here in St. Louis and the news broke mid-stream. I was stunned and took a moment to collect myself and continue. The show must go on and that’s precisely what Charlie would say about this weekend’s race.

I met Charlie twice and the thing I noticed immediately was that a man in his position was one of the most kind and humble people I met in the paddock. That’s not exactly what you might expect from a man in his position and the power he wielded. Yet, Charlie couldn’t have been more delightful and in both occasions, he was clearly busy but made time to say hello.

“I knew Charlie and his late brother Nick quite well indeed. Worked with him at Brabham’s in the mid-eighties. Charlie was way back when, a seat of the pants and most intelligent man with a wicked sense of humor. He was a quick study on how to live life to the full. A fine life. Was committed to motorsport and can only speak from my personal experience, was indeed a great leader and shared his knowledge well. Was hoping to see him in the very near future. Now very sadly not.”

The drivers took a moment to share their thoughts on Charlie and the journalists who travel with the F1 series have all offered very nice, heart-felt comments, tributes and words regarding Charlie. There is no question that replacing a man as skilled as Charlie will be difficult but the FIA have a plan.

The FIA have announced that Michael Masi will be filling the role this weekend. Masi worked as Charlie deputy and had accepted the role of race director for Formula 2 and Formula 3 but will now be in charge of Formula 1 this weekend.

There is no doubt that these are some of the biggest shoes in F1 to fill and Charlie will be sorely missed.

You know our dear friend Fake Charlie Whiting, or Mark as we call him. Perhaps no one was more stunned at the news and Mark kindly shared his thoughts with us so that we could share them with you. 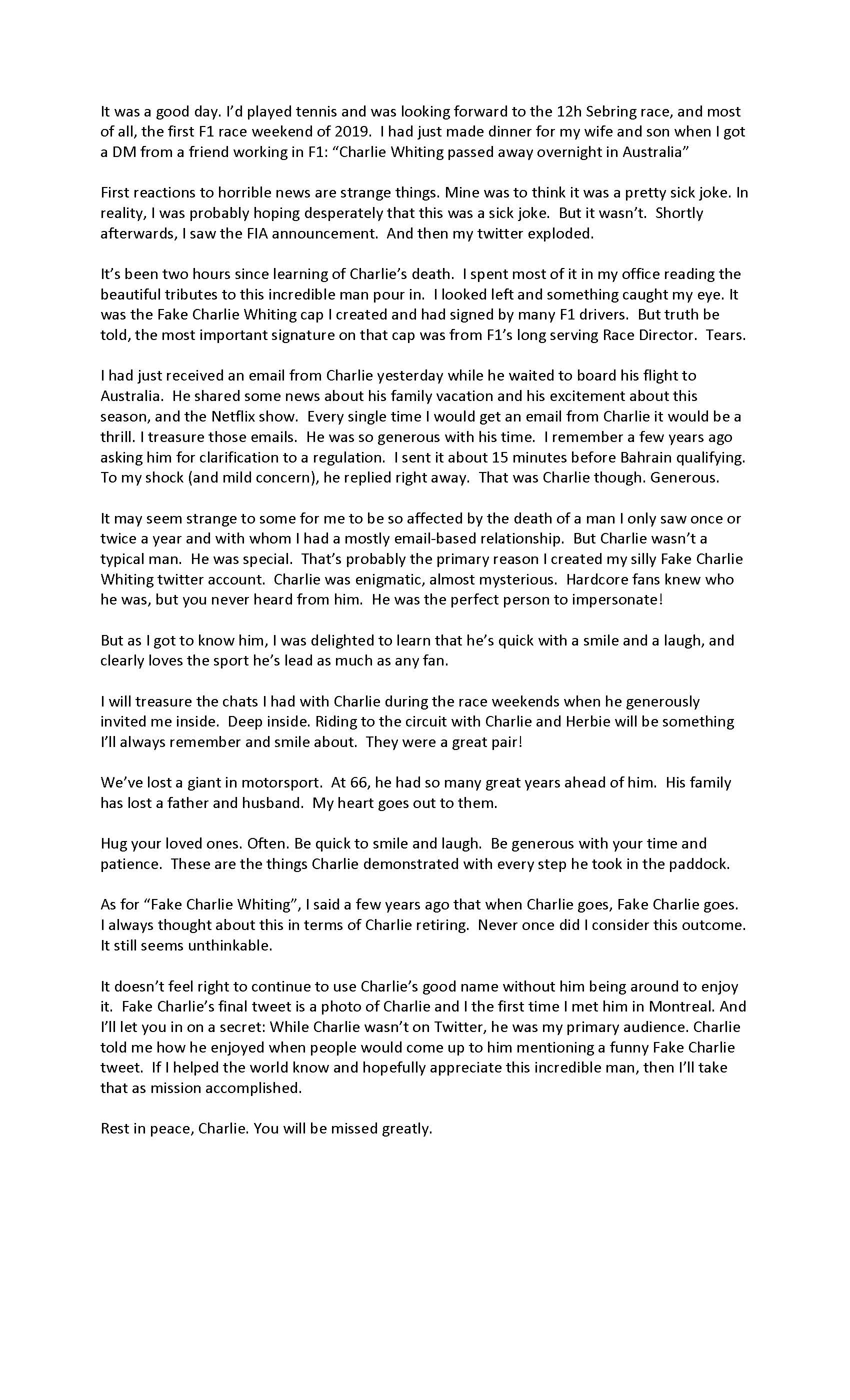 A life gone way to early. Rest In Peace Mr. Whiting . . . you will be dearly missed.

He was only 66 as well. Taken far too early.
I was at the track at the time they announced it over the PA system. Felt very weird.

It was a big surprise. As far as I could tell, he still had enough energy to go a long way in life. Tragic. :-(