Last year, the Renault car was one of, if not the, best looking cars in my opinion. This year’s deviates in many places but it is still a great looking car even if it doesn’t have the amount of rake that last years did or at least doesn’t in these initial photos. Regardless, it’s a great looking car and here is what Renault has to say about it.

Fans of the Renault Sport Formula One Team were able to get a close-up look of the 2018 season challenger today as the Renault R.S.18 was unveiled. Using specially-created tools, fans could see a stunning hologram projection of the car and spin it through 360 degrees to see its brand-new lines and new black and yellow livery.

The Renault R.S.18 is Renault Sport Formula One Team’s third chassis since its return to Formula 1 as a full works’ entry in 2016. The car is a progression and refinement of the concepts developed during the 2017 season. It includes an improved suspension concept and greater aerodynamic downforce. Noticeably, the R.S.18 also features the mandatory new-for-2018 cockpit protection known as the ‘halo’ and a re-profiled engine cover to comply with the 2018 technical regulations. 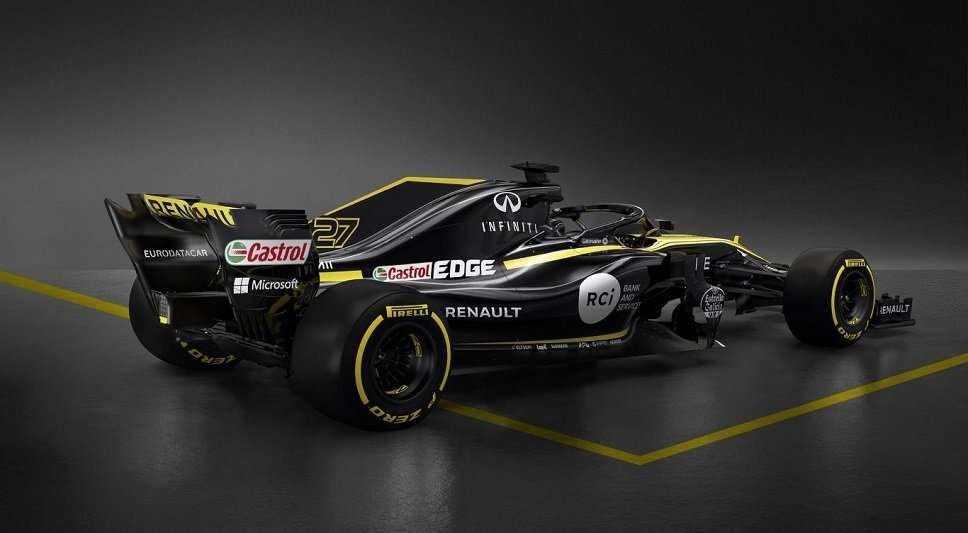 The 1.6l turbocharged V6 Renault R.E.18 power unit will power the R.S.18. The power unit has realised a very strong programme on the dyno in Viry-Châtillon to maximise performance and improve reliability in preparation for the reduction to just three internal combustion engines (ICE) and two MGU-K and energy stores per season.

The R.S.18 is developed jointly by the teams in Enstone, UK, and Viry, France. Significant improvements have been made to the Enstone facility over the past year, with enhancements to the CFD supercomputer, wind tunnel, race team operations room, gearbox dyno, machine shop and an expanded design office. The upgrades have already translated into on-track performance, with Renault Sport Formula One Team finishing the season sixth in the Constructors’ Championship, improving from ninth in 2016.

“Renault Sport Formula One Team’s ambition is clearly to uphold the outstanding record of the past and the 2017 season has confirmed we are on the right track,” says Renault Sport Racing President Jérôme Stoll. “We are a team on the rise. We have two very talented drivers who are hungry for results. Enstone is regenerated and the workforce has already increased by more than 35%. Our investment has so far been successfully translated to the track as we rose from ninth to sixth in the Constructors’ Championship in 2017 and ended the year with the fourth fastest car. 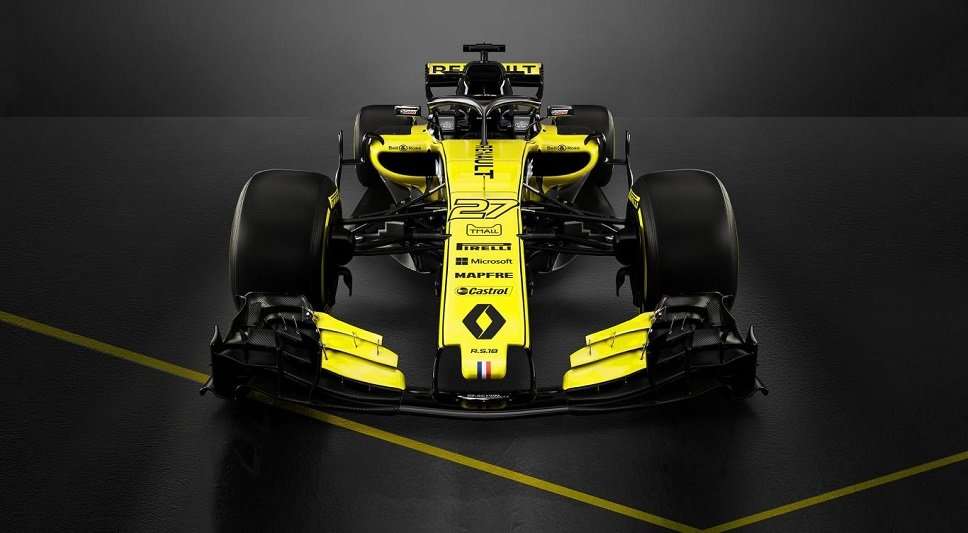 “The success of the programme in just two years is testament to the resilient plan laid down early in the creation of the team and the strong job done by Cyril and the entire Renault Sport Racing teams. I am convinced year three will take us one step closer to the long-term aim: winning races and challenging for championships.”

Cyril Abiteboul, Renault Sport Racing managing director, echoes: “Last year was successful in many ways. It was the second year in our rebuilding and a further step towards our long-term plans and aims. 2016 was all about recruiting, investing, bringing in new sponsors, new talents and building our brand. Over the past year I’ve seen progression in many areas: ninth to sixth in the standings – in many races we were often the fourth fastest team on the grid. This is a testament to our drive, commitment and adherence to a very ambitious plan. It was a quantified progression towards what we want to become and challenging the top teams.

“We have everything to be positive about this year. We have two very talented and ambitious drivers. Last year Nico gave us exactly what we needed with his experience, knowledge and ability to lead both on and off track. Carlos joined us at the end of the season and he brought something fresh, and he scored points to help us in the Constructors’ battle. Without that we wouldn’t have finished where we finished.

“Our headline target is to show continued progression through results. We want to be able to showcase our progression in every regard; power unit, chassis, operations, drivers. Everything must improve and we must continue to grow. We want to demonstrate this in many different ways, from the teams we will be directly racing against, to the gap to the leaders, including also our fan base and the respect that our team will inspire in our way we behave on and off track.”

The Renault R.S.18 will be delivered to drivers Nico Hülkenberg and Carlos Sainz, and both are keen to get to grips with the car at the first test in Barcelona, from 26 February to 1 March.

“When I have visited Enstone and seen everything going on with the development of the R.S.18 I’m very enthused about the season ahead,” comments 30-year-old Nico. “Add that to the news from Viry about the development of the power unit and everything looks and sounds good; it’s all positive and there are exciting times ahead. I’m feeling positive and optimistic in myself. We’re in a good position. For this year we want to build on the good platform of last season. 2017 was about bedding in, now I want to get ready to go. I get a good feeling, we have put the work in over the winter and hard work usually pays off. I’m eager to get out there. Put me in the car.”

Twenty-three-year-old Carlos is similarly eager to get going after joining the team towards the end of the 2017 season. “The general approach is to work harder every day to continue on a positive trend. For sure the main target is to take a step forward, both me as a driver and the whole team. It’s difficult to predict how big that step will be, however, I’m confident as I have been pushing hard during the winter and I know everyone at the factory is giving their very best. I´m convinced this is going to be an exciting season.”

Nico and Carlos will be joined this year by Jack Aitken, who steps up to become Third and Reserve Driver. Twenty-two-year-old Jack, who is British-Korean, was one of the founding members of the Renault Sport Academy and will combine his F1 role with competition in the FIA Formula 2 Championship. “It feels amazing to take up the role as Third and Reserve Driver,” says Jack. “It hasn’t quite processed yet, but I’m going to step up my involvement with the team quite a lot. Over the first Barcelona test, it will start to feel real and sink in a little bit more. The role gives me an opportunity to be closer to Nico and Carlos and learn from them, as well as observing the race team, the engineers and how everything operates. Of course, if I’m required, I’d be happy to jump in the car, but I hope it’s all fine with Nico and Carlos! At the moment, it will be about continuing my development.”

Artem Markelov will support the team in his new role as Test and Development Driver. The Russian will combine an F2 campaign with development duties in the team’s driver-in-the-loop simulator at Enstone. Artem commented: “I’m really happy to join Renault Sport Formula One Team as Test and Development Driver. Renault is a standout name in Formula 1 so to sign for them is a really significant step in my career. This year will consist of a lot of listening and learning and taking the opportunity when it comes. I’m grateful for the opportunity, and I’ve had a busy winter of preparing for what will be a demanding season of test driving and racing in the FIA Formula 2 Championship with Russian Time. I’m very much looking forward to the start of the season and getting to work.”

According to Chris Medland@ChrisMedlandF1:- “Renault says its 2018 PU has realized a very strong program on the dyno, and lists its total horsepower as more than nine hundred and fifty HP”. (4.40PM FEB 2018).
And according to Auto-motor-und-sport.de:- “The 2018 Renault PU dyno mileage at this point is 11 times as much as the 2017 Renault PU at the same point last season.

FERRARI just uncovered the first Halo with a wing.

Take a closer look at the Alfber…

OK, I was wrong and you was right, I went back had another look and seen-it. I also seen some holes on top on the RBR one, so I expect others to follow suit.

Yeah, it also looks like Renault have something going on but the photos are not hi-res enough, most likely on purpose. I also wonder if Sauber and Ferrari halo wings are really their last iteration or if it’s more of a distraction to get the other teams to look at it…

The main talking points at the moment are, “how are they going to cool the engine with that small air intake?” and the “air through the rear view mirrors”.

Just saw some twitter pics of the Haas car at one of their track days. It also has holes on top of the halo, looks to be about 30 to 40! 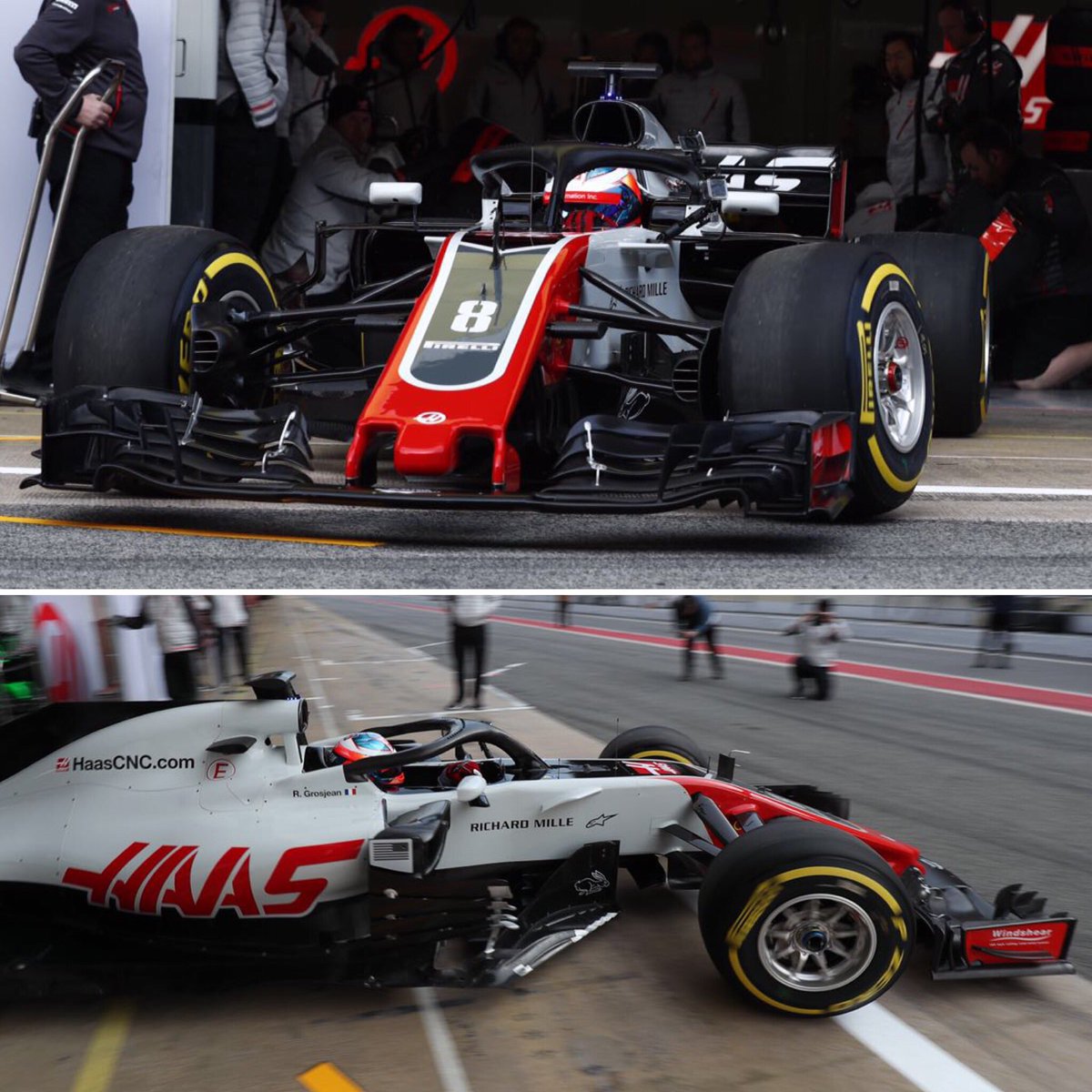 So now we learn all these debut photos of the new Renault are NOT real but the team just wanted to show off its new livery. Why do we deal with Cyril Abiteboul?

He’s just providing us with ‘alternative truths’, its a very popular approach these days apparently