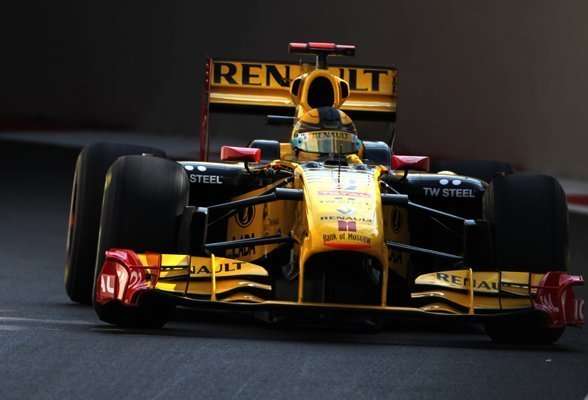 Renaultâ€™s P10 and P11 in qualifying is a bit of a surprise for me if Iâ€™m honest. I expected them to do better and certainly Robert Kubicaâ€”who was bested by his teammate Vitaly Petrovâ€”had a difficult, uncharacteristic session.

The Renaultâ€™s seemed to struggle with the right balance with a lack of grip and oversteer that prevented him from setting a better time. Eric Boullier, Team Principal, said:

“We cannot be satisfied to line up tenth and 11th on the grid: we set our sights higher than this. Robert tried everything he could in qualifying, but he struggled with low grip and an oversteer balance that prevented him from doing any better. As for Vitaly, itâ€™s good to see him in Q3 again, but he made a mistake on his final run and could have gone even quicker. We must now turn our attention to tomorrow afternoonâ€™s race, and aim to conclude our season with a double points finish”.

Robert Kubica wa equally stumped by his lack of pace but seemed to struggle all weekend so far:

“I have been struggling with the car since yesterday and we simply didnâ€™t manage to get on top of the issues, especially for qualifying. The rear of the car was sliding a lot this evening, so it was hard to get on the power early enough to set a good lap time. I tried everything, I was sideways in a lot of corners, but thatâ€™s how it was today. Itâ€™s disappointing to miss out on the top ten, but itâ€™s also the first time this year that I have had a free tyre choice for Sunday â€“ and we will have to see if we can make this into an advantage for tomorrow. The season is still not over, and we will try to finish it with some more points”.

Vitaly Petrov, conversely, had a decent session if you can call P10 good. As it is, the young Russian has beaten his highly touted teammate:

“The car has felt pretty good all weekend for me. We have made progress in each session, especially with the feel of the brakes, which is very important at this circuit, and it felt like all the parts of the package were working well today. I have been running in the top ten most of the weekend, and it was nice to deliver this potential in qualifying. Looking ahead to the race, it will be a very tough one for the tyres, and we need to think carefully about using the right strategy to cope with this”.

Either way, P10 or P11, it looks to be a difficult race for Renault and not the way I would have scripted their departure from the 2010 season. With the resurgent performance of Mercedes GP, the constructorâ€™s battle for fourth is effectively over and Williams F1 seem little threat to Renaultâ€™s current standing of fifth in the championship. Tomorrowâ€™s race will be many other reasons and perhaps Petrov has a few of his ownâ€¦namely a job.