Highlighting new partners and sponsors including BP, Castrol and MAPFRE, the launch was also the first public revealing of the new Renault Sport brand identity, designed to provide a stronger link between Renault Sport Racing and Renault Sport Cars.

The R.S.17 was unveiled by race drivers Nico Hülkenberg and Jolyon Palmer, whilst Third and Reserve Driver Sergey Sirotkin was also announced today.

Jérôme Stoll, President of Renault Sport Racing:
“The R.S.17 is the first car which Enstone and Viry have been able to plan and develop from the outset and we’re satisfied by the fruits of this interaction. It’s a beautiful car. As well as the excitement of the R.S.17 itself, we also have a highly important new partner in BP through their BP and Castrol brands. For 2017 our performance targets are clear. We want to take a definite, tangible step forward in performance and results. Fifth position in the Constructors’ Championship is our goal.”

Cyril Abiteboul, Renault Sport Racing Managing Director:
“For 2017 we are perfectly placed to take the step forward we all desire. The R.S.17 is the result of many long working hours spent over our two integrated locations and the result is a car we can be proud of. We have a strong line-up of personnel at all levels of the team and we’re proud to see Nico and Sergey join Jolyon in 2017. We are joined by a strong group of partners with BP, Castrol, MAPFRE and SMP Racing representing the best pre-season sponsorship acquisition campaign in the paddock. We are the fastest growing F1 team and we now need to prove our performance on track. Our objective is to score points at every round.” 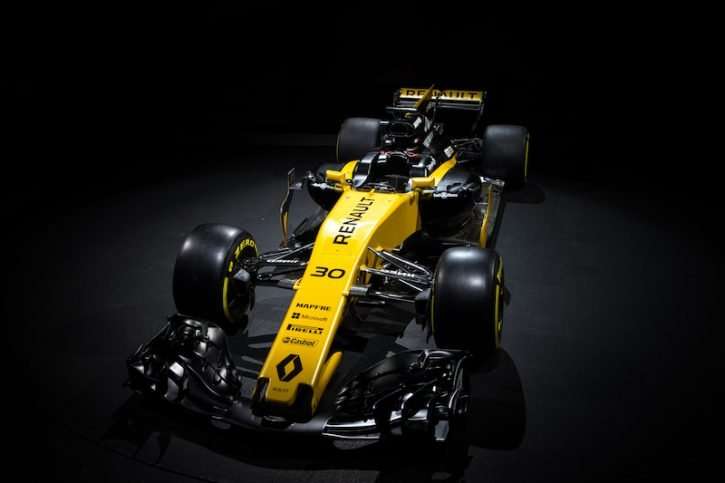 If anyone needed a new car more, it’s probably Renault.

“We have the capacity to develop and have two (2) very decent development programs with two (2) fuel suppliers and two (2) partners”.
Apart from all this forced out BS, Renault as all the other three manufacturers no matter the capacity and number of development programs, they can only homologate USE AND SUPPLY ONE ENGINE SPECIFICATION FOR THE SEASON. .

I know that beauty is in the eye of the beholder, and that its there for a good reason (to aid with stability & downforce through corners), but am I alone in thinking that shark fin ruins the appearance of the car?

Go faster paintwork is nice.
They may need it.