I was asking a lot. Let’s be honest. I was hoping that Renault Sport F1 would release their 2016 car in the French Racing Blue colors but that’s asking a lot of a manufacturer given they’d much rather use their corporate colors. Hey, at least it isn’t some combination of red, gray or black for a change.

The team debuted its distinctive yellow-gold and black colours in an event hosted in Docklands, Melbourne, in a highly unique way. The R.S.16 was first seen by the guests as it literally surfed the waves at Boat Harbour Park beach just outside Sydney !

Renault Sport Formula One Team drivers Kevin Magnussen and Jolyon Palmer plus Australian pro surfer Ellie-Jean Coffey undertook the shoot on Monday before the Australian Grand Prix. The car – a showcar for those concerned about whether it will dry out in time for Sunday’s race – was fixed to the 7.5m long board using bespoke harnesses. It was then towed out into the Pacific Ocean where it was unleashed to catch its first-ever waves. 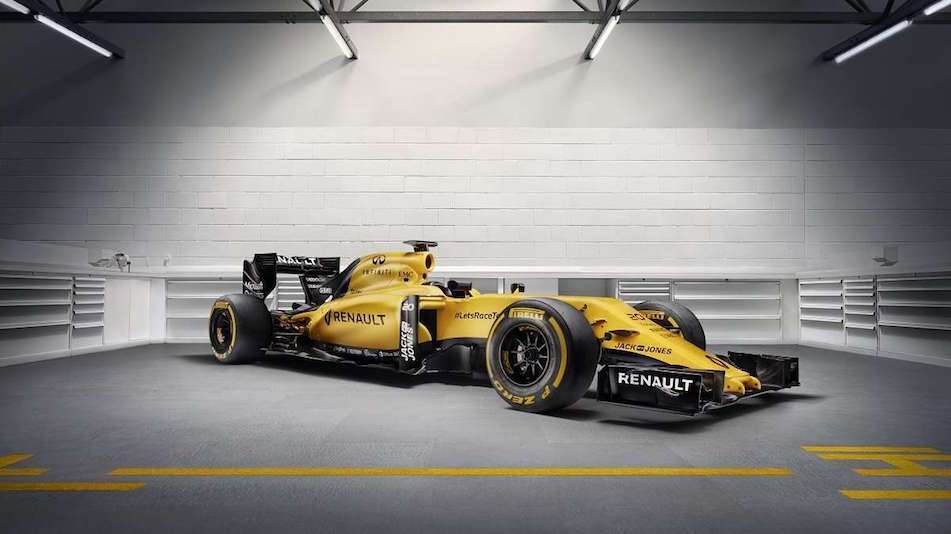 Looks really good. Very happy to see a bright colored car out there!

It looked great out on the circuit today, especially when Palmer was holding off the two Toro Rosso

Nice livery. Also nice Renault didn’t get the memo that F1 doesn’t do fun extravagant launches anymore. Party like its 2002!

I think the livery looks great, I’ve always loved a yellow race car. I just hope Renault move the cars around the world this way, arriving on the beach by surf board – very styleeeeee!

So both drivers paddling their car….is that faster or slower than Alonso pushing his car with his gold shoes? I do like the fact that it’s not grey/silver or whatever the f*** Mclaren calls it.

1. The video’s a bit too silly, but what do I know?
2. At least the black isn’t the majority this time. That color’s getting a little too common these days.

The shade of this yellow/gold seems not only to say ‘Renault,’ but also is perhaps a slight tip of the cap to the erstwhile Lotus yellow/gold… at least to my eye.

Reminds of of Robert Kubica for some reason. :(

I keep thinking of DAMS too, and with more of a design on it, Jordan. Actually thinking aa a type, it does remind me quite alot of the latter year Jordan Grand Prix, once the tobacco money went.

So in happy coincidence. Sky are showing the 2010 Australian Grand Prix right now.

At least it isn’t Black, Grey or White.
I like it.
I think I will keep it.

This website uses cookies to improve your experience while you navigate through the website. Out of these, the cookies that are categorized as necessary are stored on your browser as they are essential for the working of basic functionalities of the website. We also use third-party cookies that help us analyze and understand how you use this website. These cookies will be stored in your browser only with your consent. You also have the option to opt-out of these cookies. But opting out of some of these cookies may affect your browsing experience.
Necessary Always Enabled
Necessary cookies are absolutely essential for the website to function properly. This category only includes cookies that ensures basic functionalities and security features of the website. These cookies do not store any personal information.
Non-necessary
Any cookies that may not be particularly necessary for the website to function and is used specifically to collect user personal data via analytics, ads, other embedded contents are termed as non-necessary cookies. It is mandatory to procure user consent prior to running these cookies on your website.
SAVE & ACCEPT
wpDiscuz
14
0
Would love your thoughts, please comment.x
()
x
| Reply
Comment Author Info
Report this comment