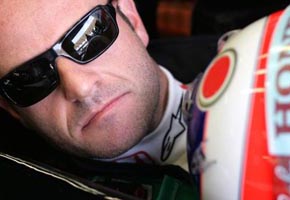 Rubens Barrichello, newly signed F1 driver for Brawn GP, said he left a message on Bruno Senna’s answering machine to wish him best. Bruno and Rubens had both jockeyed for the last remaining seat at the former Honda F1 team with Rubens winning out as experience was needed due to such a short development time before the season opener.

“I left a message on his answer machine. We are good friends and although we haven’t talked for the past few months and it is sheer coincidence that we ended up fighting for position,” Barrichello said. “I wish him all the very best, for someone who has only four years of experience he has done fantastically well.

“He has a future in F1 for sure. I haven’t seen anyone just yet with the capability of having run four years in cars, and all of a sudden getting to F1 and doing so well like he did in testing. I am just lucky that at this time F1 changed a little bit and because of a lack of testing it is going to more experienced driving again – but I wish him all the very best.”

Not sure which is worse, losing the seat to Rubens or having Rubens call and say sorry about that mate but cheer up, you’ll get a chance in F1 someday. I think Bruno must have seen the number on caller ID and let that one go to voice mail. Lucky that F1 changed and that Honda waited so long and that Ross bought the team…yes. Of course I would argue that Rubens deserves the spot as much as anyone but then I would get hate email from Senna fans telling me I am wrong.

3
If Lewis is the driver to bring Merc the titles, ...
1
A MODEST PROPOSAL Dear Parc Ferme’, Please let me begin ...
1
sort of sounds like a Southern “now aren’t you a ...
1
Nice job you two… amusing and very informative.
1
I just think every F1 race should be stopped with ...

TPF Podcast Mailbag
1 day ago by Jeffrey B. Smith
Thanks for your kind consideration of my modest proposal. Yeah ...

Ocon signs long-term deal at…
1 day ago by Fabio
I guess that Merc drive wasn’t coming then.

Pirelli gives reasons for Baku…
1 day ago by Xean Drury
Speaking of Bendy Wings, Wasn’t Toto supposed to be running ...