Sauber F1 revealed their 2010 chassis, the C29, today at the Valencia circuit in Spain. The Ferrari-powered car will still retain the full name of BMW Sauber for now said team owner Peter Sauber. One suspects sponsorship is not quite cemented yet hence waiting for the full name of the team to still change prior tot he opening grand prix in Bahrain.

“The last few months have been very intense for us,” said Peter Sauber. “First we had to battle to secure the survival of the team and then we focused on putting a strong set-up in place for the future. The technical preparation of the 2010 car has continued uninterrupted and according to plan since the spring of 2009, despite all the turmoil.â€

The high-nose design and challenges faced by teh design team in fitting a Ferrari engine and transmission to what was previously a BMW must have been difficult:

“The development of the BMW Sauber C29 has seen the team build on the experience gained last year and the improvement in performance over the final third of the season,” explained technical director Willy Rampf. â€œHowever, the new regulations banning refuelling during the race and stipulating a reduced width for the front tyres have required significant changes to the car’s design.” 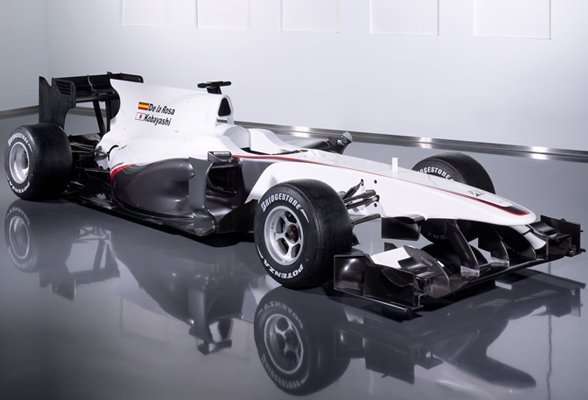 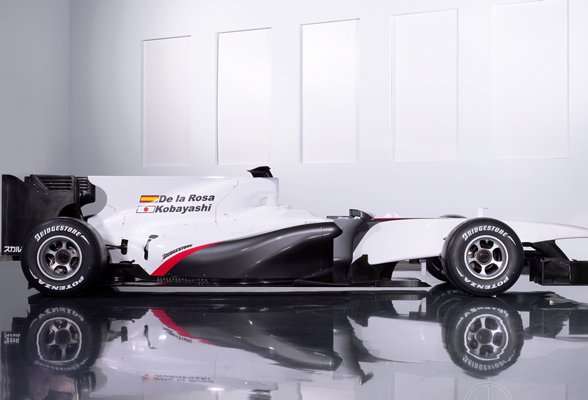 A longer wheel base for the larger fuel tank and a lot of detail in the transitional portion of the chassis to the underbody or floor of the car and one can suggest this is to optimally feed the dual diffuser hidden from photographers during the launch.

Both new drivers for Sauber are Kamui Kobayashi and Pedro de la Rosa. Both feel very happy to have been selected by Sauber and have the chance to race. For de la Rosa, it is a return to racing in grand prix and for Kobayashi, it is further adding to his exciting debut last year for Toyota.

How does Peter Sauber feel about his choices for drivers?

â€œWe have a long tradition of bringing together an up-and-coming youngster and an experienced campaigner as a driver combination – and it’s an approach that has brought us a lot of success. Pedro has been working at the highest level technically for many years and for a top team, and we can benefit as a team from this experience. Young Kamui also has a lot to offer us, and last year he impressed me particularly in Abu Dhabi.” 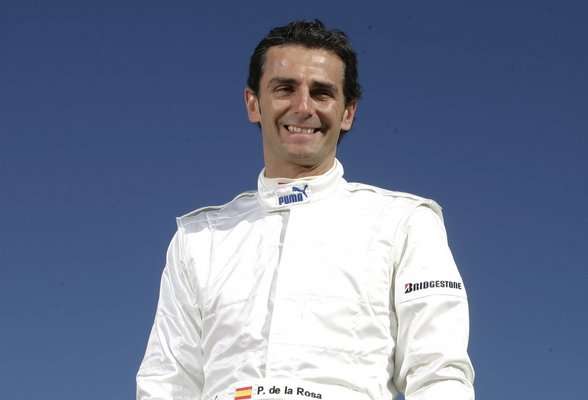 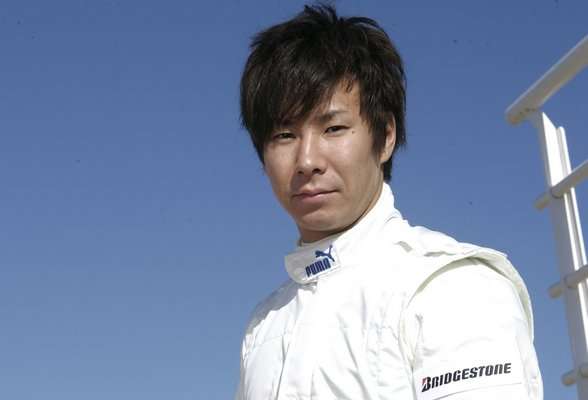 The color scheme is a continuation of the BMW colors as well and the lack of a title sponsor has left a large white space on the engine cover but that will most likely be remedied prior to Bahrain or shortly after. On might even see a change of color if a sponsor is found and are big enough.

A tidy looking car, if not intriguingly modified, in a team that is perhaps the more tangible example of what the Brawn GP team was accused of being last year…a true orphaned group of people with limited cash and development. To my knowledge, Sauber is not receiving all the assets for a pound and also 100million to follow from an exiting manufacturer. He will have to sink or swim on his own–something Sauber has done many times before.

Previous articleCosworth & New Teams: A disaster in the making?
Next articleOp-Ed: Sauber ~ Reticent owner on a 5-year plan?