There’s rarely coincidence in Formula 1 and last week’s announcement that Sauber were struggling to make payroll (and subsequent announcement by team boos Monisha Kaltenborn that they would meet March payroll) has been the first drama for the team this season…publicly at least.

You’ll recall last year they began the season with a lawsuit from Giedo van der Garde over a reneged driving contract which threatened to impound their cars at the season-opening race in Australia. Now it seems that financial challenges still remain and today AUTOSPORT revealed that there is more troubling news.

According to the report, technical director Mark Smith has left the team. He joined Sauber last year and previously worked for Red Bull and Caterham but the team say he is leaving to go back to the UK for family reasons. 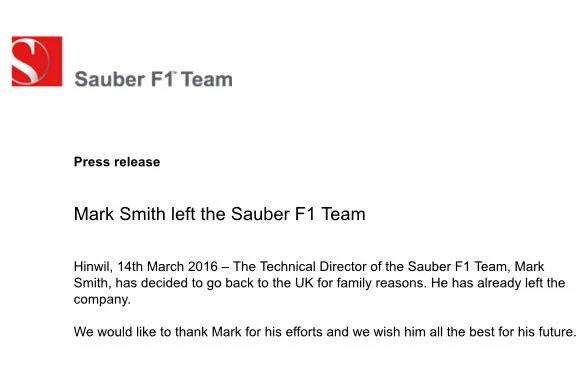 Could be coincidence but I would imagine that things are difficult at the team and perhaps Mark felt it was time to move on. That’s all speculation of course and I’ll take the team’s word for it but it’s still a difficult situation in my mind.

Why do I get the feeling that they will be the next team that gets snapped up by someone looking to get into F1.

Pretty sure they’ve been wanting that for a while now… But they need a manufacturer to do it. Another private enterprise will simply have the same struggles they do.

Sounds like Sauber’s going the way or HRT. Ol’ Pete must be turning over in his….no, wait, he’s not dead yet.

Monisha has got to be on the hot seat. This team is a mess. it is sad this is great team.

When I first read the family reason excuse I thought how lame, they need to think of something better than that! But you could easily translate that to his family reason being that they need to eat and he isnt buying them any food as he is not being paid. Under that pretence then I would accept “Family Reasons”

I said it last year at the first round, and I’ll say it again. Monisha has to go.

jiji. I do think this as well. I don’t feel like she has made any good decisions for the team’s future. She seems so focused on the issue of prize money distribution that she has forgotten to manage prize money that they have won in a way to keep the team together.

I do believe she holds a stake in the team though, so peter saubers hands may be a little tied.

Yes 33%, also Peter has basically left the day-to-day running. Think his input is pretty much over as far as ‘Sauber’ goes.

If Sauber really falters over the first 3 or 4 races this season, I expect a mass exodus of personnel or someone(s) become sacrificial lambs.

I think it’s a big family reason when you can’t support your family because you are not being paid.

I’ll buy the reasoning for now. It does happen, people do have families and family emergency reasons to go back home, and not prepared to say it’s not that, might be reading this, and isn’t enough evidence to say it’s a cover. However it’s clear, this revelation or not that sauber is struggling, quite how much we don’t know but the late car. The struggles with paying and just the general atmosphere around the team the past few seasons say it’s not great. I hope this isn’t the end of Sauber, it’s been such a stalwart of motorsport. Sadly i… Read more »