Dawn still hasn’t broken here at the Patterson Ranch, but preparations in the pre-dawn light are in full swing for my trek northward for the 2014 SCCA RallyCross National Championships at the I-80 Speedway in Greenwood, NE. This will be my first time competing at a national-level event, and I’m not afraid to say I’m a little nervous. 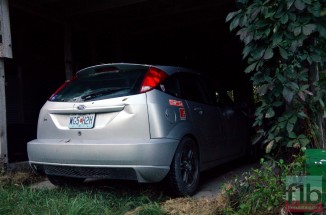 I have confidence in the car, and I know that I can bring decent pace, but neither the car nor the driver are going to be capable of taking the title this year. My first goal is to not be DFL, (figure it out kids) and after succeeding in that, best my co-driver Jeremy Salenius. Many of you may have seen European Rallycross, which is absolutely epic, or the Global RallyCross here in the US, which is fun if a bit circus-like, but SCCA RallyCross isn’t a door-to-door competition such as those. Think of a Solo event, aka autocross, only on dirt. Cones covering landscaping flags are used to define a course in some off-road environment. Often this is a pasture or the overflow parking lot of a speedway. The course, like in autocross, is designed to test car control skills rather than outright top speed. Unlike autocross, however, where your best time through the course is used for scoring, in RallyCross, the time from all of your runs are integrated. This puts a strong emphasis on consistency, and there’s my weakness. At the Kansas City Region’s last RallyCross event, I had pace to finish 2nd in class, but one bad moment of poor car control, and I was relegated to the back of the pack.

Preparations this morning include packing the car, getting a last-minute oil change, and making ride height adjustments. Our site for the Kansas City Region is very smooth and highly resistant to rutting, so I’ve set my ride height pretty low for RallyCross standards. The site for the National Championship is a bit softer and is no where near as smooth, so up the car goes! As for gear, my normal pack includes my rolling toolbox full of hammers, bigger hammers, torque wrenches, bigger torque wrenches, and if those don’t work WD-40, along with the normal assortment of screwdrivers, pliers, and sockets. Some look at me weird for bringing as many tools as I do to an event, but I’m the one they’re running to when their car breaks. Better to have it and not need it than to need it and not have it. I also pack a full cooler of water and snacks. Most RallyCross events are held in remote locations and there isn’t always easy access to lunch or hydration, so a cooler of fluids and calories for the driver is a must. Camera gear is mandatory as well. That almost takes up as much room as the tools! Lastly, a fresh set of tires are on loan to Jeremy and I from a good friend and fellow KCRSCCA member. Racers are some of the best folk you’re ever going to meet!

With the car packed, loaded with fresh oil, and a fresh set of aggressively treaded tires, it’s off to Nebraska I go! More to come this evening.

Getting Registered, Teched, and Dialed-In 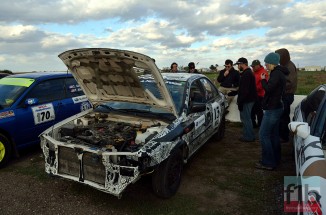 Thanks to an out-of-date GPS map, Joyce the Voice directed us to an exit that no longer existed lengthening our journey to the Speedway by over 30 minutes! That meant that things had to go quickly as we got ourselves registered, got the car in proper form with numbers, class designations, and required event decals in place for technical inspection, and then positioned the car in Parc Expose for competitor inspection.

Thankfully, there wasn’t much that was even remotely questionable about our little Focus to trigger even the hint of a protest. Others were not so lucky. Lawrence Duty and his “Dirt Dog” received quite a bit of notice, and a fair amount of scorn. Lawrence’s car has had some rather aggressive weight reduction, and even though he’s going to be no where near competitive, there was concern about the precedent the car sets as well as concern about bits of the car flying off while on course. 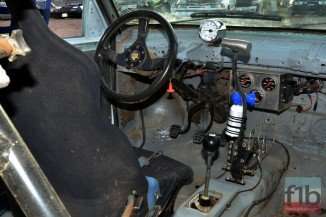 It was fun seeing all the cars displayed in Park Expose, some showed a lot of shiny bling under the hood, while others were doing good just to keep the hood up, while even others took a more minimalistic approach to their vehicles. Working horn? Does a canned air horn zip-tied to the hand brake count? The best part of Parc Expose? They fed us! Sure it was only brats and burgers, but it was hot and free. The brats were even pretty tasty.

The biggest topic of discussion among the competitors wasn’t the typical trash-talking, bench racing, and mechanical musings, but was the condition of the course. With the rain of the past couple of days, the course is in terrible condition with LOTS of undulations, pits, holes, and off-camber corners. 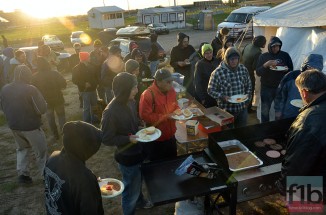 Many were concerned about how easy the course would bend control arms, rip off exhausts, bust oil pans, and potentially get cars up on two wheels. The Chiefs were still working on course when we left, but I have to admit, I’m nervous about the course. Many of the competitors aren’t in stage rally prepared vehicles which are specifically strengthened and protected from violent abuse, and I’m concerned that we may see a lot of attrition tomorrow. That’s something that should never be a factor in a RallyCross event. We’ll just have to wait and see what tomorrow brings, I suppose.

Come back tomorrow for a recap of the Saturday action, and a report on how bad I’ve broken the car.