With the drivers’ meeting at 0800 and first car scheduled for being on course by 0830, Saturday morning came extremely early, and cold! With temperatures in the mid-30s and a brisk wind as we trickled into the I-80 Speedway in Greenwood, NE, there was abundant frost on windshield, and knit caps and heavy gloves were the order of the day. This was a brutal change as just a couple short days previous it was in the 80s. The overcast skies and cool temperatures didn’t help dry out the course which remained very soft and spongy. Some grooming of the track surface had been done since we left on Friday night and before competitors arrived back on site on Saturday morning, but with the area receiving an entire year’s worth of rainfall within a few short weeks, including a major deluge the days immediately prior to the event, the surface was saturated, soft, and spongy. 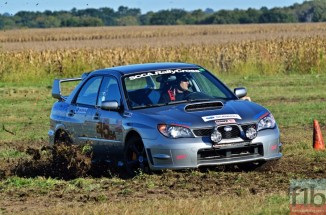 The morning, and really the entire event, was an exercise in “hurry up and wait.” The 0830 FCO time was certainly ambitious, and we didn’t make it. Combine that with event officials constantly chasing the surface, and the day was painfully slow. The first session of three scheduled too six hours to complete, and unfortunately saw the first roll-overs of the event. The upper section of the course was very susceptible to the development of ruts and berms, and having a high-speed entry, decreasing-radius corner just exacerbated the problems. A number of competitors, many of them including myself being licensed safety stewards, complained about the course conditions and that a number of course elements heightened the risk of roll over incidents.

Sadly, minimal action was taken to correct the course design, although there were numerous breaks in the action to work on the surface. I think Brianne Corn, who came all the way up from Texas to volunteer for the event and didn’t even compete, logged the most miles over the weekend on the tractor trying her best to smooth a very challenging surface. In spite of the work done on the surface and the protestations of many of the competitors, one of the Prepared AWD class cars ended up going into the final elements in the upper section of the course with too much speed and trying to turn too sharply on the extremely tacky and rutted corner. 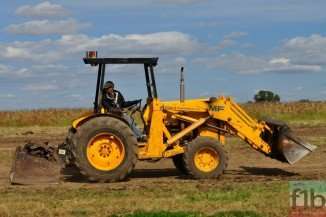 The result was a slow roll over which fortunately left the driver unharmed, but the car, although drivable, was totaled.

The roughness of the course added an additional driving challenge as the car danced atop its suspension. Keeping the car settled, especially under braking, was difficult. The biggest concern caused by the rough surface was the reliability of the chassis. The course was quickly being littered by various bits of trim, splitters, and fender liners that had fallen victim to bumps, holes, and ruts. One of the Modified FWD competitors saw his right rear axle fail to withstand the punishment. Once the wheel was gone, the remainder of the hub dug into the turf and caused the car to flip violently, rolling three times before coming to rest back on its three remaining wheels. Fortunately, the car had a roll cage, and the driver was unharmed.

The remainder of Session #1 saw everyone remain shiny-side-up, but only just. Many of the drivers, especially in the Modified FWD class were up on two wheels in a couple of the corners. The session took far longer than schedule, though, taking a grand total of six hours to complete!

The event officials elected to continue and push on with Session #2 in spite of the rapidly approaching sunset, but reduced the number of runs for each class from three to two. The course was reset, but the course for Session #2 had some significant safety issues that again many of us tried to bring to the attention of the Event Safety Steward. 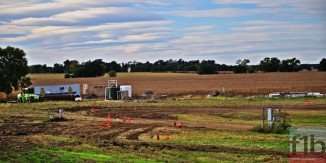 Our protestations fell on deaf ears, however, and a corner whose entry was directly pointed at a concrete pile for a light pole, and with an exit that was over-crest into a tight off-camber left which ran a mere 15 feet from the aforementioned pile was allowed to stand.

I spoke to my co-driver, and although we were only a second out of the trophy positions after Session #1, we considered withdrawing the car and filing a safety protest. In retrospect, that’s exactly what we should have done. As it was, we approached the course with a great deal more caution and trepidation than we had in the previous session, since the car was our ride home. No trailer queens here! As it was, we did manage to break some bits off the car anyway. We lost the left front fender liner, many of the retaining fasteners for the rear diffuser trim, and a few of the fasteners for the front air dam. The car looked a little floppy, but at least she remained upright and came back to grid under her own power.

This time around, there were no roll overs in the Stock or Prepared classes. Much of that is owed to fact that the landing area of the over crest corner mentioned previously was very hard packed and holding up well. Had it been even a little bit soft like most of the rest of the site, there would have been mayhem and destruction. The session was halted after the Prepared class ran as there was not enough daylight remaining to run the Modified class even after reducing the number of runs in the session from three to two. The course would remain in place and the Modified class would run on Sunday morning.

When we arrived to the site on Sunday morning at 0730, it was obvious that Brianne had spent some quality time with the tractor and box grader as the surface looked much smoother. It was still very moist, though, and it was clear that the surface wasn’t going to hold. The Modified class was first to compete as they still needed to complete their two runs from Session #2. Once they were clear of the course, thankfully without incident save for a number of two-wheeled adventures.

With a rapid reset of the course, and a quick excursion to Chubby’s for lunch, we were set for Session #3. No, I kid you not. The actual name of the joint was Chubby’s. I can’t make this stuff up. Like with Session #2, the number of runs was reduced to two given the time pressures. Not everyone was happy with the reduction in the number of competitive runs, but with many of us facing lengthy drives home, no one complained too loudly. The breeze continued to be stiff, and with sunny skies and higher temperatures than Saturday, parts of the course were starting to dry out. The problem was that the drying out of merely parts of the course made grip levels very inconsistent and unpredictable. 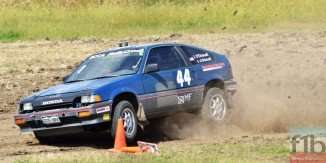 The drying conditions meant that course maintenance was required less often, and the Stock and Prepared classes ran relatively smoothly and in a timely fashion. As with the first day, there were still a number of bits left behind by several of the cars, but no one broke down on course. The Modified class did not fare so well. Many of the Modified FWD and even several of the Modified RWD competitors found it difficult to keep all four wheels on the ground. Many were up on two around some of the high-speed sweepers and some even caught full air over some of the bumps. The area by the finish line was still extremely sloppy and tight, a bad combination. The result was yet another car on its lid. It was a hell of a way to finish out a National Championship event.

Congratulations to all the class winners, and best wishes for those who ended the weekend upside-down. Here are the final results. At least I didn’t end up DFL, so Goal #1 was achieved.

Needless to say, being a SCCA RallyCross Safety Steward for the Kansas City Region, I was extremely disappointed with not only the safety of the course, but the attitude of the officials toward safety. When numerous experienced individuals are telling you that you have serious problems, it is generally recommended that you at least make an effort to listen. The feeling that I got from the event was that safety was at best an afterthought. The Town Hall meeting that was held on Saturday night was replete with these type of complaints about the attitude toward safety at the event.

As big of a concern as on-course safety was, an even bigger concern that I had was the attention toward safety in grid. There were numerous spectators milling about in a hot grid area as competitors were rolling out to the course and returning back from their runs with adrenaline still coursing through their veins. Among those wandering about grid were folks with pets and even toddlers. My repeated protestations about kids and pets being in grid were, not surprisingly, unheeded. Thankfully, there were no incidents of people getting hit, although there were a couple close calls that I saw. 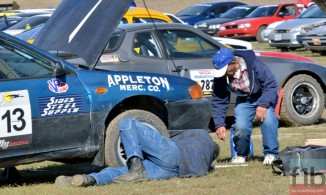 The most mind-boggling thing was the acceptance of smoking in grid, even while working on a car with various fluids and fuel nearby! It certainly isn’t the type of organization and attitude I would have expected from a National Championship event. This is where I need to insert Todd’s impersonation of Nicki Lauda, because it was total bullshit.

I doubt that the SCCA National RallyCross Championships will be held at the I-80 Speedway again next year, but if they are, I doubt that I will attend. I love RallyCross, and I’ll continue to compete at the Regional and Divisional levels, but unless the Nationals move to a different site, I will pass on making a run at a Championship. I think of the courage Niki Lauda showed in Japan when he withdrew from the race after the conditions became so bad that the course had become unacceptably unsafe, and I regret not having the same courage on Saturday afternoon. It would have been the right decision.