As is usually the case in qualifying, teams leave it until late in the final session (Q3) to make a run for pole and sometimes traffic is an issue. Sometimes that traffic is unintentional and other times it has been on purpose. The FIA has had to decide its fair share of “blocking” issues in its long tenure and this weekend, it was queried again by none other than 7-time champion Michael Schumacher.

The German has asked for clarification from FIA race director Charlie Whiting as a drivers meeting subsequent to qualifying was focused on this very issue. It seems Schumacher feels he was impeded by Ferrari’s Fernando Alonso and McLaren’s Lewis Hamilton during his final run:

“Basically on my last try, I was slowed down by him,” said Schumacher when asked why he had approached Alonso.

“I asked him whether the team had told him, and he said ‘no’.

“It’s difficult in a way because he’s on his in-lap and worrying about other things other than watching the mirror, but saying that, we had this chat yesterday in the drivers’ briefing – that care should be taken about this – and he was one of the main guys [talking] about it.

“I had a conversation with Charlie about this as well, because I need to know what is the reference, what are the guidelines here, what are the rules?

“Because if the rules have changed a little bit to what they used to be, I need to know what you would be okay with, and what not.

“I had a similar issue with Lewis, that he was preparing his lap and blocking me in a way, which is not very nice.”

Apparently Alonso was very vocal about the issue of blocking or impeding during qualifying only to be accused of doing that very thing. There is an interesting picture (I am not sure which photographer took it) showing Schumacher “discussing” the issue with Alonso while the Spaniard is still sitting in the Ferrari. 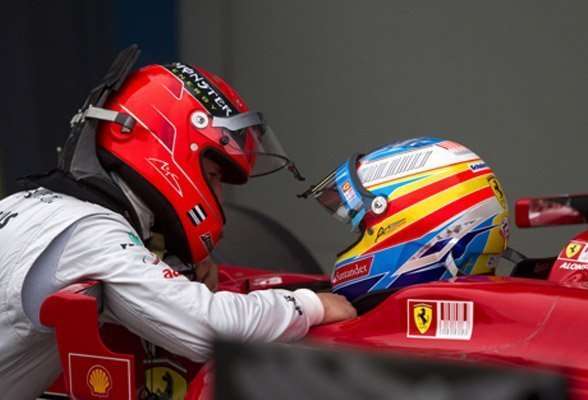 It seems Mercees GP boss Ross Brawn is playing down the issue as no big deal:

“I think it was a little bit messy,” he said.

“Everyone was out there trying to stay out of each other’s way, and allow other people to do laps.

“Because the cars needed to do so many laps to get the tyres working, there were a lot more cars on the track for a lot longer.

He said he could understand Schumacher’s frustration but doubted he was being singled out by his younger rivals.

“I think Michael wasn’t very happy at qualifying where he was, and there’s a lot of traffic out there,” Brawn mused.

“I don’t think anyone was maliciously trying to stop anyone doing another lap, just trying to make a judgement call on how quick you need to go with someone behind you is not easy.

“I think there needs to be a certain tolerance, but people also need reminding if they’ve spoilt someone’s lap.”

I wonder if Alonso reminded Schumacher of Monaco?