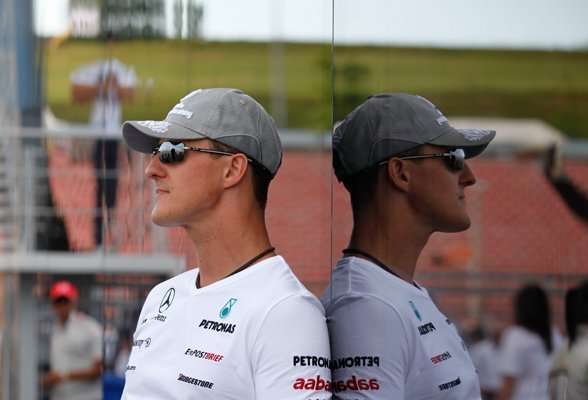 In what the BBC is calling an “unusually candid interview,” Michael Schumacher tells German mag Auto Motor und Sport that a series of problems with his 2010 car are much to blame for his underwhelming return to the Formula 1 grid.

And those problems? Not shared by Nico Rosberg.

“How do you think I felt?” the 41-year-old seven-time champion said.
.
“There were throughout the season many question marks which I am convinced will no longer exist in 2011.”
[snip]
Schumacher said there were a number of races in which he was significantly slower than Rosberg and did not understand why, only to find out later that there had been a problem with the car.
.
The Formula 1 legend mentioned occasions when the exhausts burnt a hole in the floor of his car. This would have adversely affected the amount of downforce it created and therefore how fast it could go around corners.
.
At other times, he said, his car’s F-duct aerodynamic device malfunctioned so that it worked in corners as well as on the straights, again significantly reducing grip.
.
He also complained that the Bridgestone tyres varied in their performance “from set to set”, which exacerbated problems he was having with their general tendency to produce a lack of grip at the front of the car, a characteristic Schumacher dislikes.
.
He admitted he grew frustrated with this over time and ultimately told team bosses Ross Brawn and Norbert Haug that they should make some kind of public statement about why he was struggling.

Schumacher does acknowledge all the problems weren’t the car’s, and rates himself a “3” on a grading scale of 1 to 6. He also says he didn’t want to go public with the problems, although he apparently encouraged Ross Brawn and Norbert Haug to do so.

Perhaps most importantly: Schumacher says Mercedes will address these issues for the 2011 season.

So, will we see the “old” Michael — or a reasonable fascimile — back in 2011? Do these issues strike you as legitimate reasons for Schumacher’s pretty obvious struggles? Why would Michael “come clean” now? Is the criticism of his year getting to him that much, do you think? Or is it an early mind game to the competition, perhaps?