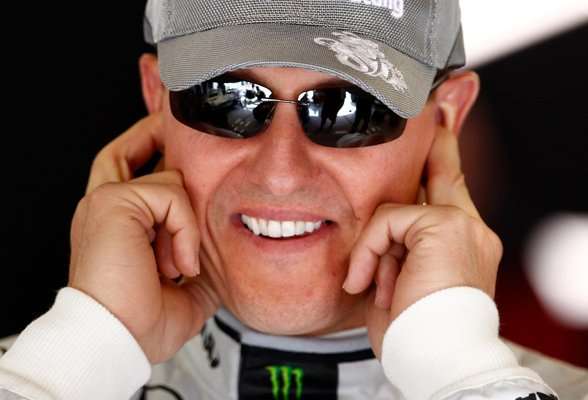 Michael Schumacher says he is happy to be back driving in Formula 1, despite the trying 2010 season, and he is expecting better results next season.

“I enjoy it. I feel I have the right to do what I enjoy. Whether I put in dispute my reputation…I just feel good about my decision and I have so much support from people.”
.
“I certainly want to make it a successful return,” he continued. “I’m only happy if I’m back on the winning road with the team. This is what I’m working for, this is the joy of the passion for Formula 1.”

In the piece, both Heikki Kovalainen and Alain Prost defend Schumacher’s year. As we’ve come to expect, the focus is on the car Mercedes provided the seven-time champion. (Hint: It wasn’t all that great.)

Of course, there’s also the fact that Nico Rosberg consistently outperformed Schumacher, but we’ll leave that for another time.

What interests me almost as much as Schumacher’s comments to CNN is this blog post at ESPN. Right now, it leads the “Racing” section, still a relatively buried spot, but one where F1 stories rarely get much high-profile play.

Schumacher is only part of the piece, but the headline is all about him. (The photo is of him and Nico.)

And that’s a healthy reminder: F1 may not desperately need Schumacher back, but F1 in the United States does.

Schumacher still is the one driver who seems to command any attention from U.S. media, and with a grand prix returning in about 18 months, F1 needs a steady stream of coverage and hyping.

Schumacher winning next season probably is the best way F1 gets that in America.

(The writer of the ESPN blog goes a different direction on this subject, by the way:

Making some back-page headlines recently was also the news that American Alexander Rossi had recorded the fourth-fastest time in the GP2 tests at Abu Dhabi.
.
Rossi finished fourth in GP3 this past season, and could be America’s most likely candidate for a future F1 seat.
.
A driver from the United States is paramount in the upcoming years, as F1 is set to return stateside in 2012.
.
In years past, the sport has been woefully underrepresented by Americans.

While I agree with that, it isn’t going to come in time to make the USGP a success. But a successful Schumacher could.)

I’ve said, yes probably too repeatedly, that F1 needs to get a foothold with U.S. sports media so it appears on American fans’ radars. Absent a concerted effort by F1 bosses to secure that, Schumacher’s winning is the one “news” that I imagine would land F1 on the front pages of sports web sites here.

And if Sergio Perez could score a few points next year, that wouldn’t hurt the Austin race, either.