March 19th sees the 64th running of 12 hour of Sebring, one of the top classic sports car endurance races of the year and we asked one of our top instructors, Matt Bell, driver of the No.9 Stevenson Motorsports Audi R8 LMS which runs in the IMSA GTD class car, to take us for a lap around this amazing and storied track.

The first thing anyone will tell you about Sebring is going to have something to do with the atrocious surface quality. The second thing they’ll tell you is the history behind the famous race track. The two facts are linked, however. While the track is slated to finally be repaved this year, the last time serious machinery has worked on the surface of the track was sometime in the 1950s. It was originally a B17 training station through 1946, and by late 1950 it was holding motorsport events. The track has only degraded since then. While the bumps, grooves, filled sections, and temperature-dependent friction sound like blemishes on an international raceway, the track will likely lose some of its charm once repaved. As it was a former air base, it is very flat. It has been joked for years that if one measures all the peaks and valleys of the cracks and bumps around Sebring, it will add up to more elevation change than Laguna Seca. While I’m not sure this is true, it does paint a picture of the sandpaper-wrapped washboard surface that makes up Sebring International Raceway. Between missing fillings from the bumpiest surface in sports car racing, missed reference points due to zero topographical change, ever-changing traction levels, and the constant possibility for a burning school bus someplace in the infield, Sebring can be a challenging, yet very exciting race track.

Setting up cars for Sebring has become very difficult over the years. Without considering the ever-changing surface of the track, sports cars are generating more and more downforce, requiring 004accuracy of ride height only possible with very firm spring rates. Accurately placing the car’s aerodynamic features while heaving over all the bumps and jumps around Sebring can be jarring to car and driver. With jumps in Turn 1 and T17, a softer setup would make it easier to keep tires on the ground, but more often today, the aerodynamic benefit of rolling higher speed through these corners than keeping the car attached to planet Earth. 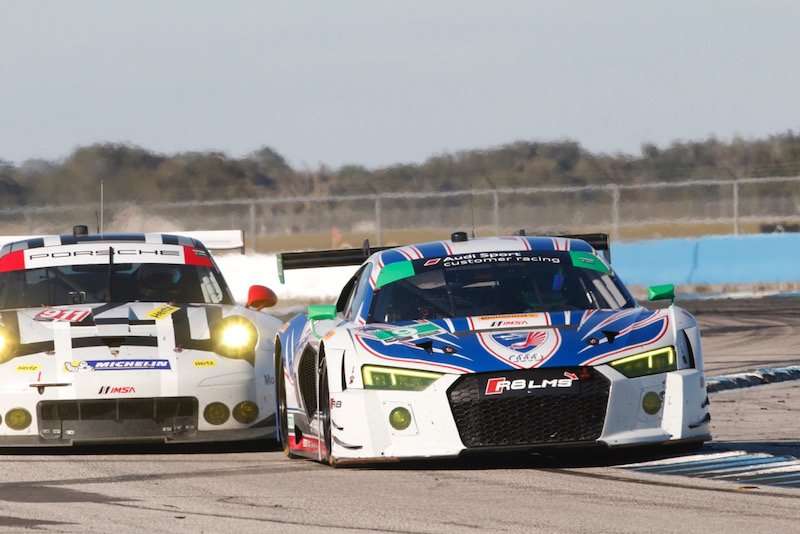 This is a very high speed corner with few reference points. It is smooth on the way in, but gets very bumpy on exit. Most people gauge their braking and turn-in points based on proximity to the foot bridge overhead. This is not a great reference point since it is so far ahead of the corner. Turn 1 is not a heavy braking corner. Most, if any braking is done merely to take a few mile per hour off and place some weight on the nose. Many drivers will tend to initiate braking while the car is straight, then bend the car in since it can be difficult to slow the car at such high speeds. It is often unwise to place the car to the extreme right against the pit wall. Debris, water, and dirt gets trapped against the wall and can quickly ruin a weekend. Turn-in should be smooth, but requires some command over the front tire. Most cars, if they go off, do so with too much understeer. This push often begins with an improper turn-in, either too late or without enough braking. The goal should be to roll as much speed in to the corner as possible and get close to the inside wall. The fast drivers will often feel like they could brush the wall with their mirror– better said than actually done. As soon as the car is set on this path, someplace between turn-in and apex, the exit should be easier to spot, and eyes should be pointed to the section of track just past track-out. The bumps from apex to exit are very aggressive and can be jarring. A focal point to close to the nose of the car can disorientate the driver which the car crosses these bumps. With a distant focal point, it will be easier for the driver to throttle their car to the exit, accurately rolling to peak acceleration while placing the car against the track-out curb. This curb is not used heavily, most times just half a tire placed on it.

To complete the lap, check out Matt’s column at Simraceway

Really looking forward to the race on Saturday. Thanks very much for the preview Matt & Paul. Good luck to Matt, Lawson Aschenbach and Dion Von Moltke in the race :-)