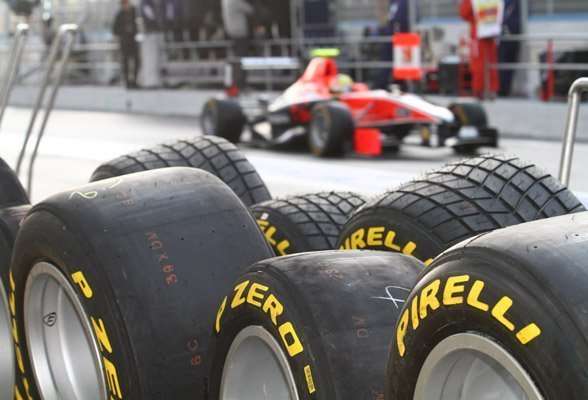 Don’t like the headline, well, I dare you to try to find the news in the very first day of testing of a new tire compound for Formula 1. I mean, c’mon, like this has any relevance to anything?

Still, we have the times and besides Felipe Massa’s being the quickest, Nico Rosberg foreseeing another lousy year for Mercedes, what do we have? How about Massa and Sebastian Vettel, the top two drivers today, applauding the news tires?

Yeah, that’s about it.

OK, first up, here’s the finishing order, for what it’s worth:

In my mind, that mainly tells us that where the cars finished last season is about where they are — shocker! Given, you know, it’s been less than a week since they all last ran.

I will raise an eyebrow at the Force India results, however. That’s a second and a quarter difference. I know it doesn’t mean anything, thus only the one eyebrow.

And so, lacking any great meaning, I give you Massa and Vettel. Here’s their reactions:

“There were no unpleasant surprises.
.
“We tried two different types and acquired a lot of data which will be useful for the Italian company to develop the tyres still further for the start of the 2011 season.
.
“On the hards, there were some difficulties over a long run while the softs worked well both on the very first lap and also after they had done a larger number of laps.”
.
And Vettel:
.
“It was all about the tyres today, as this was the first chance we have had to try them out and work with them to develop the car’s set-up for next year.
.
“I think the tyres behaved well, better than expected given the short amount of time Pirelli have had and they’ve done a good job.
.
“Pirelli are obviously in the middle of their development and what we used today is not what we will race with, but it was a good start.
.
“It was great to be back in the car after an incredible week – I went to Salzburg on Monday morning for a TV show and press conference and then to the UK to say thanks to the team in Milton Keynes – that was quite emotional.
.
“It’s nice for me and the team to be able to enjoy our success, but 2011 started today and I was focusing on the tyres and getting to know them – I think we have learned quite a lot.”

Does anyone want to go out on a limb and make any claims given the first run? Are we seeing the results of a Ferrari-Pirelli conspiracy? Could Sauber be on the rise? And — just to tweak a few of you — how many runs with Mercedes clearly not suiting the tires will it take before Michael Schumacher has a little “accident” that will end his comeback?