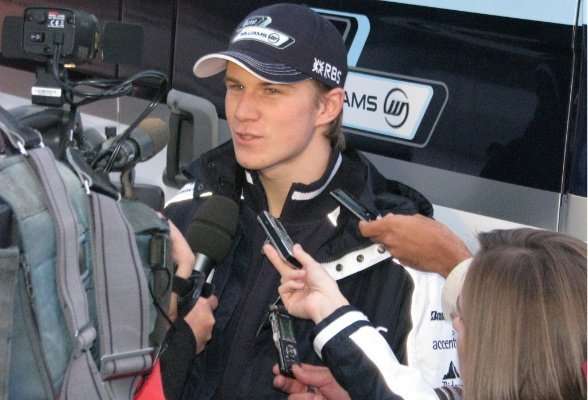 Everyone seems to have written Vitantonio Liuzzi out of Formula 1, because today’s Silly Season talk has Nico Hulkenberg potentially going to Force India, Lotus (buh-bye Jarno Trulli) or Ferrari (assumedly as a backup, huh? Or should we start the Hulk vs. Massa rumor?).

This is according to German Auto Motor und Sport.

And it seems reasonable enough. Hulkenberg did land his car on pole once this season, and he had a solid enough rookie outing. But at either Force India or Lotus, he would have to push aside another driver.

Hulk vs. Trulli doesn’t get me all that worked up — I’m pretty well on the record that I don’t think Jarno still has it, so that pairing (i.e. Hulk and Heikki Kovalainen) sounds OK to me. I’m not excited, exactly, but maybe Lotus could find a way to market those two guys.

What’s more interesting is the young driver vs. young driver dynamic at Force India, where tester Paul di Resta seems to be the heir apparent — and heir pretty good, too, judging by his DTM and testing performances this year. But he isn’t “proven” in F1 or open wheel at the highest level. So is he a gamble as opposed to Hulk? Which driver would you put in your car if you were Vijay Mallya?