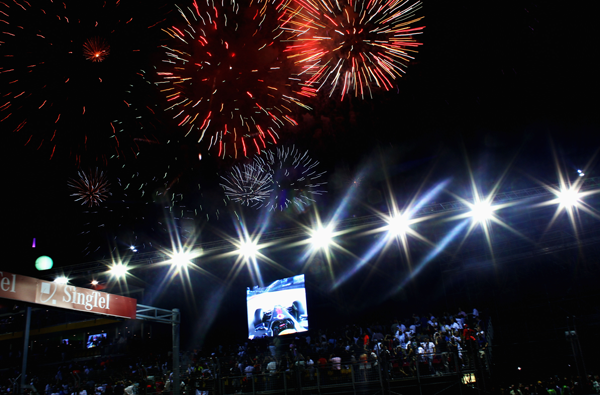 As Formula One’s only night race, Singaporecompleted its 4th successful race in a 5-year contract.  The night race has added an element of novelty to the racing series but has it been a success?

Some fans complain of the race length and circuits lack of character providing a dull race.  Others enjoy the nighttime element and find the circuit unique and challenging.  It’s a tall order to compareSingaporeto the crown jewel of F1 inMonaco.  The same holds true for comparingValenciato the municipalities rich history in racing but the big question now is—willSingaporestay on the calendar?

Speaking to the press after the race, Second Minister for Trade and Industry S Iswaran says they are in no hurry to renew a contract,  Tan Yo-Hinn of Today has the story:

“At the end of the day, we do have five years on the contract and there is no need to be hurried about it,” he told reporters at a community outreach event at Marina Bay Sands (MBS) yesterday.

“We should be deliberate and measured in the way we go about this … taking into account all factors. It’s not about delaying, but about everyone making sure they have carefully studied it and there is time.

“My own sense is that we need to have some kind of closure on this, certainly before next year’s race, and I’m hoping we can find a mutually beneficial agreement sooner rather than later, where all parties can say this is something that is of value to them,” he added.

The race has achieved S$100 million in tourism receipts each year it has been run and more than 110,000 visitors came to watch the race in the first three years.  Yo-Hinn goes on to say that the revenue generated from the visitors is somewhere north of S$420 million so no matter which way you look at it, it’s either slightly under water or at least break even.

This is the very notion that has been offered as a warning to Austin Texas-based Tavo Hellmund and the Circuit of the Americas (COTA) which will host the United States Grand Prix in 2012.  Even Autoweek’s Dutch Mandel slated F1 boss Bernie Ecclestone and made a spectacle of himself by offering an open letter to the citizens ofAustinto not approve the Major Events trust Fund being used to pay for the sanctioning fees demanded by F1 boss Bernie Ecclestone—effectively calling Ecclestone the Devil.

The likelihood of not making major profits from an F1 race is certainly there.  No F1 fan, following the series, needed a lecture from Mandel on just how limited an organizer is in retaining a share of the profits derived from a race.  We’ve known that for some time now and apparently the Singapore Grand Prix organizers are figuring this out.

“The principal negotiation is between SGP and the F1 administration what could be the possible terms to continue the race. On the Government’s side, we’re doing our own preparation work to make sure we have a clear sense of what the dimensions of the race are for us economically and what we can and should be willing to do if we want to go forward.”

He said: “F1 has been good toSingaporeon several fronts … andSingaporehas been good for the F1 … It’s a good partnership that we would like to see it continue on a mutually beneficial basis.”

What Mandel failed to mention, and perhapsSingaporewill find in their feasibility study, is that the impact of F1 has tangible and intangible benefits and you have to measure the entirety and scope of the race to understand the total impact.

COTA will most likely face similar challenges.  With 110,000 attendees, which is a good number based on the USGP’s attendance at Indianapolis Motor Speedway, could generate similar revenue.  The question is, is it enough to manage circuit construction debt and pay back the Major Events Trust Fund through tax generated through the sale of local service and products?

One thing is for sure, no matter how many times a race organizer suggests that their locale has been good for F1, the simple fact is that the series doesn’t need them.  That has always been the position of Ecclestone and to be honest, it has proven to be true.

Connect with
I allow to create an account
When you login first time using a Social Login button, we collect your account public profile information shared by Social Login provider, based on your privacy settings. We also get your email address to automatically create an account for you in our website. Once your account is created, you'll be logged-in to this account.
DisagreeAgree
7
5
0
9

Connect with
I allow to create an account
When you login first time using a Social Login button, we collect your account public profile information shared by Social Login provider, based on your privacy settings. We also get your email address to automatically create an account for you in our website. Once your account is created, you'll be logged-in to this account.
DisagreeAgree

2
This was a really great discussion and agree with pretty ...
1
Tingling fingers doth not measure interest in auto racing or ...
1
Wait, I thought he said that about the 2009 rules. ...

Bratches out as F1’s commercial boss
Jan 20, 2020 by MIE
More importantly, who will the bravado award be named after ...