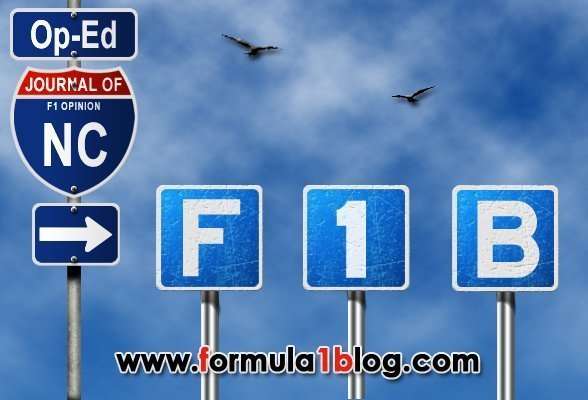 The FIA’s announcement that it has arrived at a solution for the 2013 engine regulation is really no shocking revelation. We’ve all been expecting it and with Partick Head’s animated endorsement of an eco-friendly 4-cylinder turbo engine, I assumed it was heading this way. We even suggested as much on F1Chalk #5.

I understand Pat Symonds statement that an F1 car lacks torque and that KERS gave it a completely new set of parameters in which to work from high speed to low-speed torque. I understand that concept. I also understand the notion that F1 racing is not the “greenest” form of sport in the world and quite honestly, no racing ever will be. The only way to completely be green is to stop breathing, die and mysteriously float into space so as not to leave any residue of your existence on the planet for the delicate water table to clean up after.

SJ Skid raises a much more salient concern in his story here as well as F1B’s Mark Hallam here—what about F1’s behind-the-scenes, planet-melting travel, freight and manufacturing processes that brazenly subject the world to its carbon flatulence? Surely the amount of carbon an F1 race spews into the environment pales in comparison to one of Jean Todt’s trips to Malaysia and back to talk about road safety with a few thousand bike-riders?

In my opinion, F1 is starting to take its cue’s from the road car industry. The KERS system alone is antiquated, by road car industry standards, and the technology they are building in road cars is becoming staggeringly good. Is F1 being led by the nose now?

I recall a time when F1 pressed the limits of technology and even if the systems used were not something that would directly translate to the road car industry, it got their attention and made them look at their own technology in new and inventive ways. The F-duct alone may inspire some very interesting concepts in road car aerodynamics but I am not at all sure if those days aren’t coming to an end.

Pat Symonds said, on the most recent Motor Sport Magazine podcast, that he believes less prescriptive regulations and a realistic budget cap would be the best way forward. I don’t disagree with that but managing a team’s money will be a difficult task to be sure and the regulatory body is in the business of making “regulations”. The regulations they make will dove-tail with their trend to mirror their current initiative which seems to be “green” and not so much road safety…the very thing they’ve stood for, in unison, for time immemorial.

I won’t presume to split hairs with a really nice chap and well-respected F1 journalist who commented on F1’s need to be green by saying “Formula 1 HAS to follow that trend”. F1, in my opinion, doesn’t HAVE to do anything to be honest. Its chief goal is to entertain fans and make money in the process. It owes nothing to the car industry which, it might be said, is doing fine without the sheer brilliance of F1’s technology innovation. F1 has no obligation to relieve itself of the minuscule carbon footprint it currently displays on the worlds ecosystem nor would it, by doing, so garner more fans in the process. I am afraid I disagree, F1 hasn’t got to do anything…but the FIA does because it’s a organization enslaved to the propaganda of the nations and clubs it represents. F1 has no allegiance or need to cater to political bodies.

I am wary of F1 becoming a political tool to head-bash members or nations into anything that conjoins sports with realpolitik. Even the recent Wikileaks article shows us just what my own government has been up to in the war on humanity using “Green” to spy, control, con, manipulate and ploy the masses. If you are a human who is concerned for the earth and you want to be good stewards of what we have and leave it better than we found it, then you and I are friends and we can agree that it is our duty to do so…everything else is either “green” mass manipulation or “green-washing” to make a buck.

F1 fans don’t feel guilty. Not like road car customers do…apparently (I’m looking at you Prius owners). F1 fans have never fancied their sport as a way to save the planet—last time we checked it was dropping its pants in front of five hookers and lying to stewards in Australia. This isn’t our cause to fight nor is it our politics to pick up and attach to our sport. You want Green? You want carbon credits? You want LEED certified buildings? You want Green cars? You want a Green, paperless society? You want a Green government that taxes users of carbon? Fine, go create it but keep your damned hands off F1!

Modern F1 was never created to be a political action committee nor was it founded under the precept of getting road car companies to pull their heads out of their backsides and build a decent car that doesn’t destroy the planet every time you start it to go to grandma’s house. It’s a trend alright…one that has run its course. Mark my words, Green is dying…Blue will be the new Green in a couple years. We may need a bigger Crayon box folks.

If F1 is to be salient to the “Green” movement it will be on its own accord and because there is something in the green SKU list of “crap ideas for sale” catalog that actually makes the car go faster…period. If a hybrid F1 car solves the torque and high-speed issue, you will see hybrid cars because they will go around the track faster. If F1 is to be green, it will be because someone at Woking, Maranello or Brackley found a brilliant way to make a part or technology better by using newer materials that are less egregious on the environment, while attempting to figure out how the hell they are going to get their driver around the Ascari chicane faster. Let F1 choose its weapon of choice based upon the constructor’s brilliance, not because it’s mandated through regulation in the hopes of appeasing political perception and suspect agendas…it only leads to “Greenwashing” and that’s just plain insulting.

Leave the realpolitik aside folks, F1 is no place for pious movements with varied intent. A 4-cylinder turbo engine is not the end of the world but we have been here before and I don’t think current road car engine desires should play into F1’s quest for the future. I say let the teams design the best system using KERS and whatever lump they want. The reality is, “green” is started to be viewed in its available light and people are already moving to the next “thing”. Even if F1 decided to be “green”, they are about three years late to the Beguine.

Like Pat Symonds, I tend to think that less prescriptive regulation and lower budgets, in which to work from, is a grand challenge. You may just find that some seriously “Green” technology comes oozing out of F1 and back into the road car division…just the way it used to in the old days. Anyone forget how Honda made a better, more efficient engine by learning from their F1 program? Anyone want to guess what the most efficient racing engine, in context, is? That’s right, F1.

Give me a V6 turbo with KERS and I think that will shake up the F1 world as well as the road car world and how the “Green police” love their world shaken and not stirred.