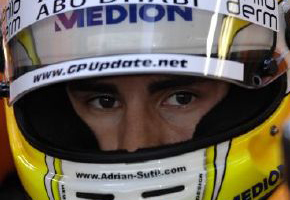 Force India boss, Vijay Mallya, has said that struggling pilot Adrian Sutil is under no pressure for his job.Â  Adrian has struggled with only one race finish in four Grands Prix this year.Many are starting to recall Technical Chief Mike Gascoynes warning that if Giancarlo or Adrian weren’t up to snuff; Tonio Liuzzi is waiting in the wings.Â  Liuzzi battled for the remaining seat with Giancarlo Fisichella with the seat being awarded to Fisichella.

“Adrian hasn’t had too much luck. It’s unfortunate, but I am sure that his luck will turn, as luck does. He’s got a lot of talent, he’s quick, and I think he can do a good job for us,” he told Autosport.

With the struggles comes questions.Â  Adrian is much touted to be on par with Lewis Hamilton, a GP2 classmate so to speak.Â  So far, Force India have failed to see the Lewis-esque performance leading many int he media to speculate on just when will Liuzzi be suiting up to take over the seat.

As Mallya points out, Fisi has 200 GP’s under his belt; Adrian has 20.Â  That’s a tenth of the experience of Fisi and who better to teach Adrian than a veteran like Fisi who, it must be said, has been putting in terrific performances for Force India and have many of us thinking this may very well be a “real” team.Â  Let us hope Adrian comes to grips with the car and his luck and that Force India will prove to be nothing like the two owners of this team previously.

2
Who wants to go to Austin in November dragging coats ...
2
PLEASE not another street circuit. PLEASE. Best thing that happened ...
2
Grace, while I love your commentary your comment that you ...
2
I don’t like this and I have never liked Pirelli ...
1
You sound really tin-foil hat, mate. Are you suggesting that ...

Haas F1’s Russian flag color…
7 hours ago by Xean Drury
You know, I was thinking about this whole situation. And ...

Haas F1’s Russian flag color…
22 hours ago by Hautacam
I’m pretty disappointed with this development as well. So much ...

Haas F1’s Russian flag color…
1 day ago by Tim C
I’d be curious to know how much money Gene is ...