In preparation for the first grand prix of the 2010 season, the FIA have released a presser that highlights the new layout of the Bahrain circuit. Several changes have been made and while we think those changes were very much warranted, we also hope this adds some element of excitement tot he racing.

Several changes have been made to the track for 2010. Itâ€™s now configured with inner and outer circuits, a new loop, and has 23 turns: 13 right-handers and 10 left-handers. The additional loop, starting just after the old turn four, brings eight new corners â€“ a fast left leading into a sequence of five bends followed by a quick kink then a hairpin â€“ all with a significant elevation change.

Intriguingly they have made these changes and added elevation tot he mix which almost unanimously wins fans approval. How drastic these changes are and how effective they will be remains to be seen. The most frequent criticism regarding the spate of Herman Tilke-designed tracks is the lack of overtaking spots, character and elevation changes. The prevailing design element is the create a track that twists in upon itself and create an infield section for fan viewing. Americans are quick to say that is one element of NASCAR that they like over road courses–the ability to see the whole race. It seems Tilke has been attempting to have his cake and eat it to with his work over the last decade. 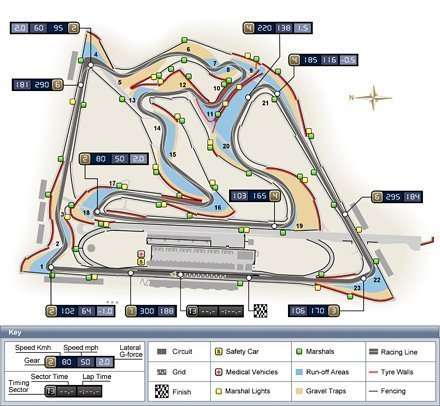 The layout will be a new challenge for the drivers and should add overtaking opportunities. BICâ€™s desert location means sand blown on to the circuit by frequent strong winds can reduce grip levels. To help ensure maximum grip, the track surface was laid with a special type of sandstone. The Bahrain Grand Prix, with its Arabian climate and desert setting, presents competitors with a unique challenge: all must cope with heat, dehydration and sand.

What do you think of the new layout? Can these changes make an otherwise generic Tilke track more exciting with more passing?