The British Grand Prix – a trip into the paddock with @SantanderGP

I never win anything. That’s a fact. So when I saw the following tweet straight after qualifying on Saturday, I didn’t expect my luck to change:

@SantanderGP: Hi @SantanderGP female followers at Silverstone!. The first five to send us a message will have a Garage Tour tomorrow. #morewomeninf1

I guess the odds must have been in my favour, as having chosen not to go to Silverstone on Saturday (not because of the car park fiasco, but because I never bought tickets), I was at home, on my MacBook with Tweetdeck in front of me, tweeting away right after the end of an extended quali session. I think 30 seconds must’ve passed by the time I saw the tweet and hit ‘reply’ and I never thought I would be one of the first five to tweet the F1 sponsor. If I’d known I’d be one of the first, I’d probably have gone for something more original than ‘Pick me! Pick me!’ as my response…

An hour or so and a DM later and I was a confirmed winner with a clear instruction to meet my fellow winners at the ‘Winners’ Roundabout’ at 9am the following morning, and bring something red (so that almost confirmed we’d be visiting Ferrari – thank you Shell for the red poncho!). A tweet from Santander then confirmed I’d be going into the paddock with one of my Twitter friends, @F1_Girl, who I’d been following for three years and had only gotten round to meeting on the Friday.

So I arrived at Silverstone nice and early and at 9am headed to the ‘Winners’ Roundabout’. There a Santander golf buggy stopped by to collect us and we were on our way into the paddock.

Upon arrival, we received our paddock passes and casually walked past Nico Rosberg who was surrounded by autograph hunters as he made his way into the paddock. 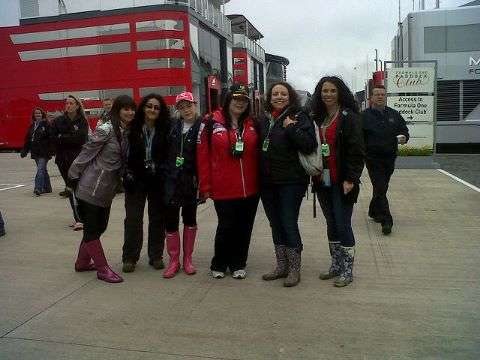 The first stop was the Ferrari garage where we each had the chance to hold a piece of carbon fibre bodywork. So you’re probably thinking ‘oh wow, you went into the Ferrari garage, and the first thing you’ve commented on is the bodywork’. Well to be fair I was surprised they allowed us to touch it, and I have to admit, I was struck by how weightless it actually was. 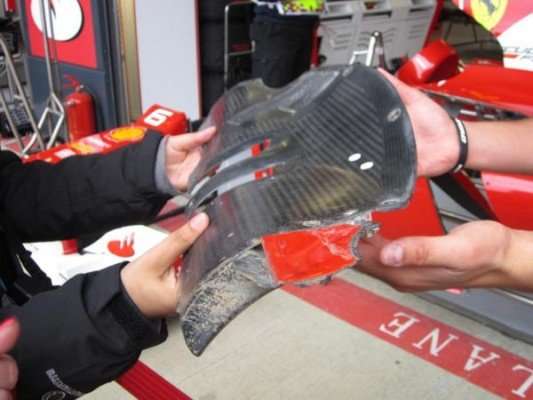 We spent a while stood outside the garage taking photos of the inside where the mechanics were working on Felipe Massa’s car, and on the GP2 cars in the pitlane, and on the way back through the garage I tried to sneak a peek inside the McLaren garage. 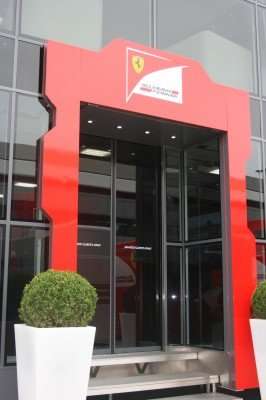 The next stop was the Ferrari motorhome, which on the front door has a sign saying ‘Invited guests only’, which we were allowed to ignore. We went straight up to the top floor, past Fernando and Felipe’s private floor, and had the chance to look around. This is where the drivers meet with their engineers and have the chance to take some down time with the team. There we were treated to Italian iced coffee, and we had a look at the paddock from the balcony. @F1_Girl took a photograph of me overlooking the paddock, and it wasn’t until afterwards that I realised how inappropriately dressed I was – not only was I wearing a pair of pink wellies (thankfully clean ones!), I was also wearing a McLaren jacket. I guess the only thing that stopped me from being removed from the motorhome was the fact the Santander guys were also dressed in McLaren jackets (something they told us can often be tricky when they are suddenly asked to switch teams). 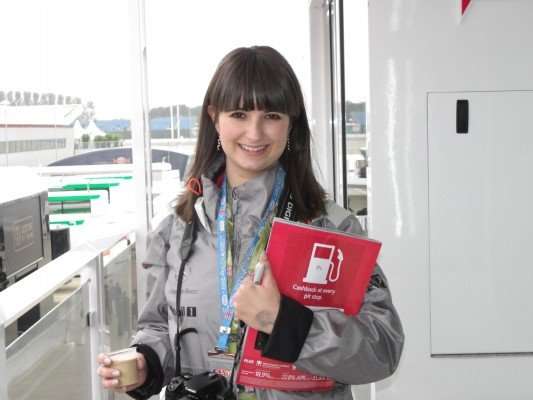 Next we had a trip into the McLaren motorhome, where we had a look around the ground floor, before heading back out to take a look at Bernie’s motorhome (from the outside I hasten to add – I’m not sure how Bernie would’ve felt if he had found us in there). We then walked down to the Caterham, Marussia and HRT end of the paddock, before walking back, only to find Lewis Hamilton walking out of the McLaren motorhome towards the truck behind the garage. We stood there for a moment in a bewildered state, before rushing forward calling ‘Lewis! Lewis! Lewis!’. (Here I would like to point out my paddock pass did not have the word ‘Media’ written on it, so I could be as unprofessional and fangirl-like as I wanted to be). A quick chat confirmed Lewis was hoping for rain, and a few autographs and photos later, we walked away in a state of shock. Next on the hit list was Jenson, who was walking into the paddock and stopped to sign some autographs, followed by Romain Grosjean, who was (as ever) smiling. 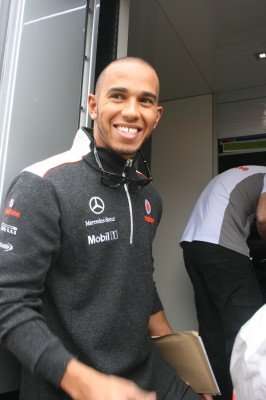 After that, we made our way back out of the paddock, only to be almost run down by Natalie Pinkham in a golf buggy. Something Natalie later tweeted as a ‘close call’ after I sent her the evidence on Twitter. 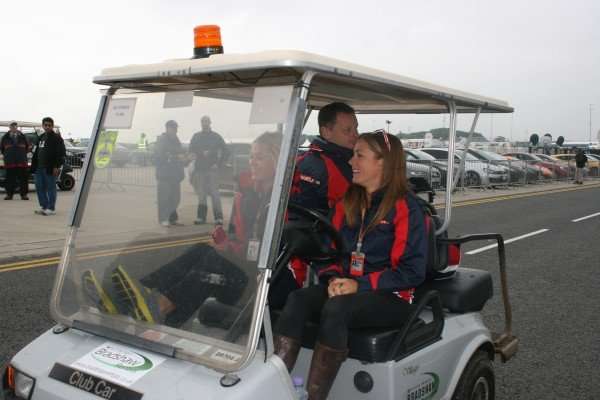 All in all, it was an incredible experience, one I’m not likely to forget in a hurry. Being F1B’s Senior Editor for Social Media, it seems only fitting that I should find my way into the F1 paddock through a competition I won on Twitter, and I have to say a huge thank you to Santander and our hosts. I just hope I win something similar in Monza!

So there you have it – that’s what I got up to in the Silverstone paddock. Until such a time when I enter the paddock again, normal service (otherwise known as a more professional approach to my writing) will resume with the next post… In the meantime, here are a few photos from my time in the paddock… 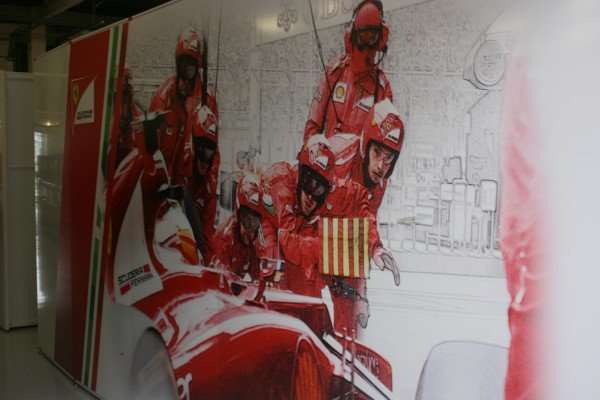 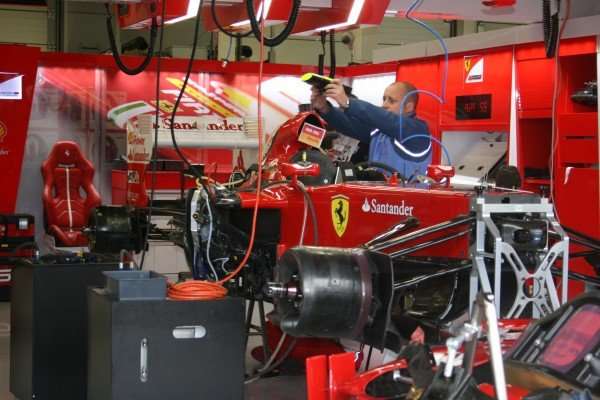 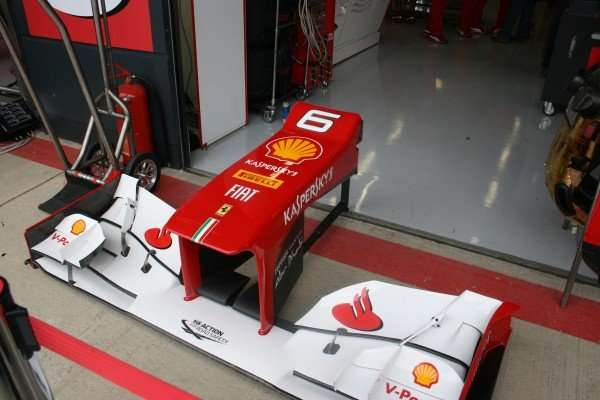 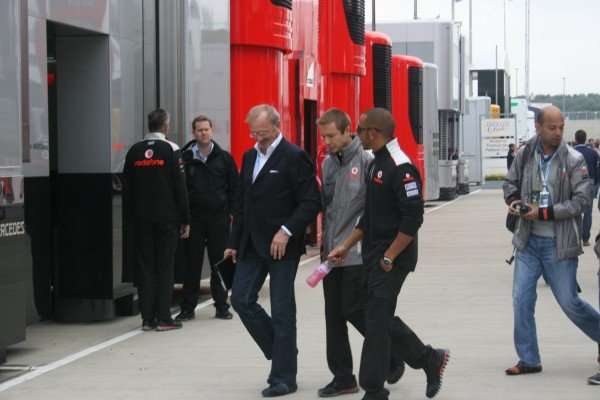 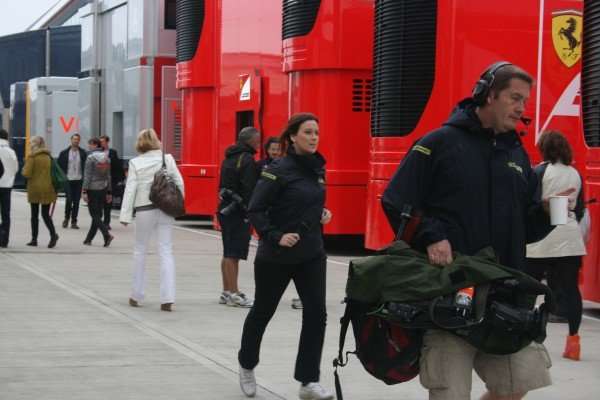 Previous article
F1Biography: The Racing Dentist & the 1955 Syracuse GP
Next article
Question: Why is Tost happy with his drivers?