As you know, last month F1B held a competition with Shell V-Power for one lucky reader to win a pair of grandstand tickets to this year’s British Grand Prix. We were delighted to announce raithrover as the winner, and now, in an F1B exclusive, he tells us about his day at Silverstone…

‘And the winner is…’. Just a few words and then everything changes.

Every year without fail we discuss visiting the British Grand Prix before embarking on a world tour of other races. For 2012 we had decided that Budapest, Turkey and Turn 8 was another contender before a Bernie knockout blow. Living in Scotland, Silverstone seems as far away, in many respects, as many other F1 destinations. Now thanks to Formula1Blog and Shell, Silverstone was calling.

Fate is a wonderful thing. The British Grand Prix clashes with Scotland’s T-in-the-Park music festival, which is just up the road. The Stone Roses and the Scottish weather had been dispatched to a friend a few months prior. The weekend was free until those fateful words. Our road trip began on Saturday at 2300. Eager to avoid the festival traffic we headed south over the Forth and towards Edinburgh, or as this iPad suggests Edinburg. Silverstone is roughly 8 hours away, manageable even with the stream of traffic when the chequered flag is unfurled. Monday off was not an option (thanks guys) so a coach from Newcastle at 0330 was booked to allow some needed recuperation.

This destination in itself guaranteed entertainment as anyone aware of its reputation will know. Newcastle is the city that parties until dawn in the shortest skirt possible all year round. The wait would not be boring. Yet before all that we had the rain, chaos and Saturday’s stay away message. Arriving at Silverstone on Sunday was relatively hassle-free by coach. The staff on the ground deserve credit for handling large volumes professionally in difficult circumstances. For the organisers and visitors, preparation was key. The mud was everywhere and the real hardcore fans had their deck chairs out in the most boggy of conditions. Wellies or boots were essential and although the rain sadly stayed away until the post-race festivities, you had to get dirty outside of the Paddock Club. 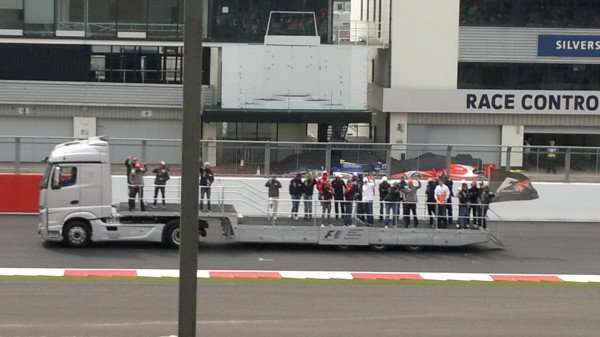 The prize was two tickets in the National Straight stand, or the old start/finish line in simple terms. The view was tremendous allowing us to witness the drivers coming around Woodcote before reaching top speed and entering Copse. This scenario guaranteed some action on the straight and the roar of the engines at their tinnitus-prompting best. The race was not a classic and Paul di Resta retired early, but we had Pastor’s antics, Kobi’s parking and the charge of Mark Webber. Plenty of action and the support for all the British drivers each time they drove past. The amazing transformation of McLaren fans to members of the Webber loyal was fun to see, especially when he passed Alonso. 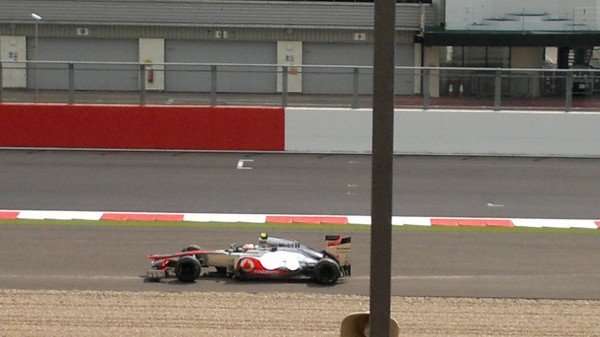 In summary, the whole day gave us much to saviour and we both agreed the travel involved was well worth it. While neither of our teams did well, nor our countrymen, the British Grand Prix atmosphere and passion for the sport from all ages is remarkable. So thanks to Formula1Blog, Shell and Laura!

Thanks to raithrover for taking the time to share his experience with us. Stay tuned to F1B for more from Silverstone in the coming days…