Editor’s Note: As our listeners may know, Paul Charsley work at Simraceway and they recently held their winter F3 series at Laguna. As we’ve been asking ourselves where the next generation racers are coming from, this is a series to be watching here in the US. Here’s how Race 3 finished:

The 3rd race in the Jim Russell F3 Winter Series by Simraceway saw a very different landscape as this was the inaugural “away” race for the Lola F3 cars and the first in many years for a Jim Russell Championship. A glorious weekend greeted racers and Simraceway crew alike at the world famous Mazda Raceway Laguna Seca. From Zanardi to Andretti, Laguna Seca and it’s infamous corkscrew has been a haven for many an epic open wheel battle and now the Jim Russell F3 series drivers would get a taste of it for themselves.

No surprises up front as 2014 champion Chase Murray put it on pole in commanding style a full second ahead of the field .Ryan Garcia had a torrid time in practice putting it off the road twice but got it altogether despite his lack of running time and used his prior track knowledge to line up alongside the swift Texan. Filling out the 2nd row were Pat Daly & Doug Tuttle followed by past winners Kevin Woods & Brian Frank the rest of the field filling in nicely behind them for a full field ready to get into action.

As the field rounded turn 10 the pace car pulled off and Chase was in no mood to let anyone get a sniff as he made a great getaway to hold P1 into turn 2, apart from Frank taking 4th from Woods everyone just slotted into their qualifying positions as a clean start prevailed as they got to know Laguna for the first time under green flag racing. Lap 4 and the pace car was dispatched as Bill Shields lost it on the exit of the difficult turn 6 and found himself beached in the gravel trap. Four laps of caution followed with Bill having to retire due to suspension damage once he made it back to the pit lane.

On Lap 9 the green flag dropped again and John Schauerman pounced to take 10th place from Steve Campbell, but all eyes were to the sharp end of the field as a 3 way tussle broke out between Pat Daly, Doug Tuttle and Mr Excitement Brian Frank. Over the last few laps they ran nose to tail through Laguna Seca’s incredible mix of sweeping turns and elevations. Daly struggling with his downshifts and Tuttle was smelling blood. As seems to be usual with the series everything seems to build up to exciting finishes and this was not to disappoint.

On the last lap Tuttle went for the inside pass into turn five. Daly left room but held Tuttle close, shortening his radius. They went side by side through 5 with Pat gaining just enough of an advantage up the hill that Doug had to back out at the turn-in for turn 6. Brian Frank took advantage of Doug’s slower pace through 6 and passed him up the hill to the corkscrew. Brian then set his sights on Daly and had a good run out of turn 11 and got half way alongside but Pat held on for the final podium spot. So Chase Murray continued his winning ways as he saluted the Simraceway crew with a nice little weave down the front straight, Ryan Garcia keeping t on the road for 2nd. 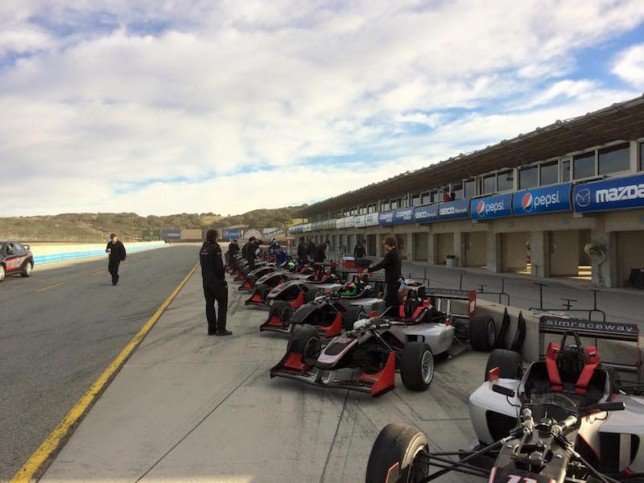 Top Ten finish up as follows