The Lapizta lap of Interlagos

Editor’s Note: Nico Rondet is a dear friend of F1B and head instructor at Simraceway. He’s raced in several racing series, including at Interlagos, and coached some of the biggest names in motorsport. We’re very honored to have him walk us through a lap of Interlagos. Enjoy the Lapizta lap of Interlagos brought to by Lapizta watches.

Interlagos or Autódromo José Carlos Pace.
One of my favorite race tracks in the world.

You are barreling down into Turn 1 or the Senna “S”. The whole track is pitched towards the left as it still has the camber from the old Turn 1. Big late braking but as you start turning in, you loose the uphill camber so a very easy place to get sucked into braking too late. Also, it’s easy to start turning in too early… and then try to fight off understeer trying to keep the car to the left.. big compromise. If you do this well, the bottom compression of the right portion of the “s” should be very close to flat, rocketing into the “Curva do Sol” Turn 3.

Turn 3 is easy flat out, but a neck stretcher and a right front tire fryer!
Turn 4: Curva do lago: Downhill braking.. off camber from apex out, yet a traditional 90 degree corner… then flat out back up the hill.

Laranjinha, you turn in flat in fifth or sixth then as the hill catches the car, you downshift a gear, then you better have used that compression well to keep the car on the inside… if you run wide… it will get wider and wider fast… plenty of room… but not efficient… oh yeah, massively blind too!

The “esses” the right hander, track is level… when you turn in… turn in early, and keep the nose planted as long as you can, the exit is downhill… but then still from the left side of track you dive into the next corner: pinheirinho (little pine tree… I think you can figure out why it is called like that). Good camber, good grip, but easy to overdo, the car is so compressed it is on rails… exit is much steeper then it looks on TV.

Then the “Bico de Pato” Duck’s beak: slowest corner on track, approach uphill, then less steep, then downhill, also the camber rolls off on the exit, you actually do not want to track out all the way, but you do want to open the radius on entry as much as possible… sounds obvious but most drivers don’t because of too short a run from the Pinheirinho.
Then the “mergulho” dive corner!… turn in early blind, flat-out… the compression is going to catch you… maybe another huge fryer for the right front tire.

Last turn: “junção”, the junction corner where the old bypass was… also where Kimi likes to go exploring where the next support series’ pits are. 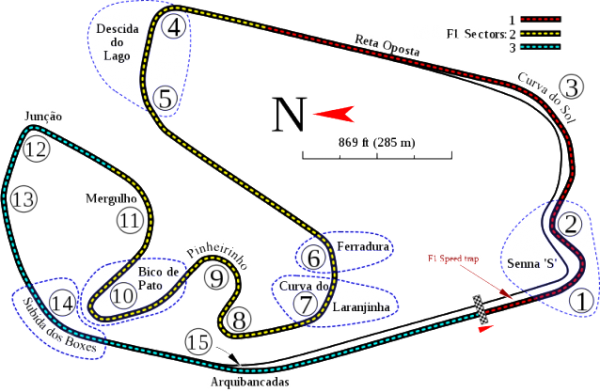 Slow just a little faster then the Bico de Pato, a big bump seems to come back year after year despite repaving, just at the beginning of braking zone. Then level entry and right after apex, massive uphill… but not early enough for you to use it and be able to turn in early… but believe me… really steep uphill! I had to walk up there once… don’t ask! Really tough! But again reducing the efficiency of the draft, well until the “Curva do café”… do I really need to translate that? Blind super fast, going from uphill to steep downhill, all while turning flat out but pulling some serious “Gs”.

Many a bad accident happened there as drivers jockey for position. I can’t write about that “corner”, I mean it is flat out easy, without thinking about my friend Rafael Sperafico killed there in a stock car a couple of years back.
Then the downhill really helps the draft work! It is hurry down… hope that the other guy is not going to force you to far into the pitlane… and right about where that pitlane starts… the uphill starts again… almost stopping your progression… in most cars, you gain very little speed from there to the braking into turn 1.

I have a good… well not so good story about that pitlane wall… place of “my” big accident in my early days in F-Ford.

Right about then, is where the crowd becomes overwhelming… the grandstands are all along the straight, but somehow right there everything gets amplified. The “Torcida” is chanting like they do in the soccer stadiums… Yet you need to focus onto that brake marker!!!