Periodically we receive stories from readers/listeners. They are great supporters of F1B and they have a topic or commentary they feel compelled to write about. While not all submissions make it to F1B (as some do not fit our idiom), Ian Griffiths story does. He took the time to email Grace and I about running a story on helmets in F1 and we rather liked the story and idea. We thought you may as well. Thanks to Ian for taking the time to provide this nice story and being a part of F1B. Here is Ian’s story, we hope you enjoy it. 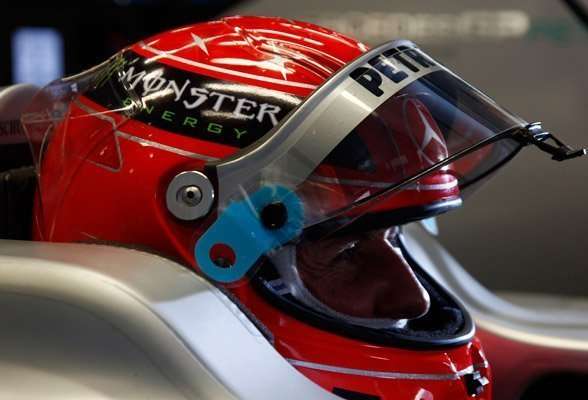 Like many others, I’ve been an F1 fan from early childhood. I remember that back then, Thursday evenings meant only one more dreary day of maths and geography at school, Friday evenings meant no need for an early night and a lie in on Saturday morning, Saturday’s meant no school on Sunday and Sunday’s meant F1.

Fast forward 20 years, switch school, maths and geography for work, reports and targets, and life isn’t so different really. I still look forward to 12:59pm on a Sunday afternoon, waiting with anticipation for “the lights to go out” and that dash to the first corner. I will never tire of it. Never.

As an F1 fan, I feel privileged that my pre-teen, impressionable years were filled with Senna, Mansell and Prost. Who couldn’t want to be a racing driver, an F1 racing driver, watching the epic wheel to wheel battles of Senna and Prost, Senna and Mansell, Senna and everyone? Despite only being 10 years old back in 1989, I still remember vividly the collision at Suzuka – 1 chicane, 2 McLarens, plenty of tension, a World Championship on the line and…locked wheels. Wow, it still excites me when I watch it today.

Maybe I’m biased by boyhood memories, but the late 80s and early 90s are, without question, the best ever era in F1. Ok, the Schumacher years were unbelievable, a lesson to everyone else in the field – but interesting? No, not in the same way. The old boys from the 50s and 60s, well they were the height of risk and bravery, but I think the sport hadn’t developed and wasn’t such a spectacle back then. And now? Well, the current era is still too young to judge, but I think it’s shaping up to be one of the most interesting periods of F1 since the early 90s, possibly ever, Vettel (obviously), Kubica and Rosberg are the guys to watch in my opinion.

One thing however, that has evolved with F1, but hasn’t really changed over the years is something that has fascinated me for over 20 years and still does. It’s something that, for the viewing public defines a driver more than his driving style, team, personality and possibly even looks. That attribute is his helmet. Despite minor tweaks race to race and season to season (with the exception this season of Vettel who seems to have a different design every weekend) a driver’s helmet and it’s livery is possibly the most recognisable attribute of any driver.

Being fascinated, I thought I’d do a rundown of the 5 most famous, recognisable, crazy or interesting F1 helmets of recent years. 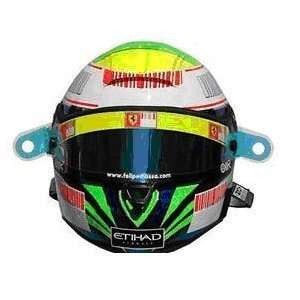 In at number 5, this is maybe the most infamous helmet on the list and makes it there for unfortunate reasons. So, the design is pretty “standard” and there aren’t any particularly interesting, distinguishing features, however, this helmet is one of very few that has actually been tested in recent years. When Felipe Massa was hit by a stray piece of Rubens Barichello’s car in Hungary 2009 it certainly proved itself, thankfully, saving Massa’s life. It’s definitely deserving of a place in the top 5.
4. Schumacher – Suzuka 1998 – The Surprise 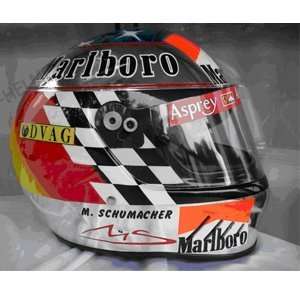 When creating any F1 list, no matter what it is, you always have a “banker” entry. Michael Schumacher. However, when I began to think about helmets I was shocked when Schumie didn’t appear in my initial list of ideas. The livery he sported at Ferrari, which he then brought with him to Mercedes is dominated by a plain Heinz tomato soup coloured design. We shouldn’t be surprised by this lack of creative design given the comments Coulthard has made regarding Schumacher’s alternative dress sense during his BBC commentary! However, digging a little deeper I was reminded of his years at Benetton where the livery was a little more colourful and I remembered the “chromed-up” version he wore at Suzuka in 1998. So in at number 4 is Schumacher’s attempt at a fashion statement, a worthy entry!
3. Vettel – Season of 2010 – Ingredients of an F1 Driver

Remember those word association games on UK morning TV? (UK readers certainly will) Timmy Mallet and a hammer? If I were to say “Vettel” then there’s only one response… “helmet”. Vettel appears to change his helmet design more often than most men change their pants and in 2010 the frequency really went through the roof! With so many chances to make it into my helmet top 5, Vettel was almost a certainty. I particularly like this design which lists the Red Bull (drink) ingredients and has a huge ring pull on the top. Given the well known effects of Red Bull’s powerful energy drink, maybe Vettel should have sported another famous slogan, “does exactly what it says on the tin” in those over energetic incidents with Webber and Button this season.
2. Raikkonen – Monaco 2005 – The Iceman 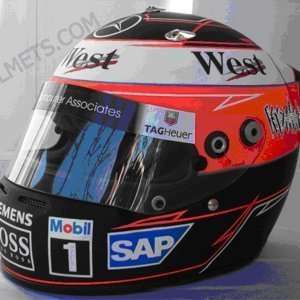 Kimi Raikkonen appears to be a relatively shy type of guy when you hear him interviewed. It has however been well documented, that he is “a bit of a party animal”. Add Monaco into the mix, money, yachts, money, casinos, excess, money, excess and you’ve got an explosive combination. The excess and extremes of Monaco were definitely on display with Kimi’s helmet in 2005 where the livery included his Iceman trademark studded with diamonds. You have to hand it to him, in a place like Monaco where one-upmanship is rife – I think it’ll be tough to top this effort!
1. Ayrton Senna – “The” F1 helmet 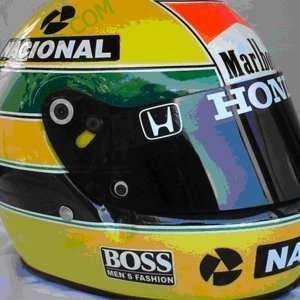 If you were to ask anyone who has watched F1 over the last 25 years to draw a helmet, you might get a few who would (attempt) to draw Hamilton’s, Button’s or maybe Fernando Alonso’s livery, simply because those are the helmets we see week-in-week-out on the news right now. However, I bet that the majority of people would reach for the yellow crayon and draw the most legendary F1 helmet ever, in my opinion, Ayton Senna’s. There’s not much more to say other than its miles ahead of any other helmet, its “The” F1 helmet and part of the legend – Ayrton Senna.

Ian is an F1 fan, car lover and blogger on Make and Model, a website specialising in classifieds for used cars from dealerships all over the UK.

If you are looking for a replica helmet, these images are from F1-helmets.com and I am sure they would appreciate your patronage and visit. They have a nice selection of replica’s including the ones you see above.