The FIA prize-giving gala has come and gone and Mercedes were officially handed the World Constructor’s trophy while their driver, Lewis Hamilton, was given he World Driver’s Championship trophy. That may be a big moment in the team and Lewis’s life but to be honest, the news out of the even tis really Plucky Teen Max Verstappen.

Max won three trophies at the gala and is the first person to win three non-championship related prizes. The Dutchman won Personality of the Year, Rookie of the Year and Action of the Year.

“I am amazed and very happy to have won three awards this evening at such an important event, and at the end of only my first year in Formula 1,” said Verstappen.

“It’s nice to win the Action of the Year for the second time, because I really enjoy overtaking on track.

“It’s a great honour to win the Rookie of the Year award, as it’s voted for by the Drivers’ Commission and I have to say, getting two fourth place finishes in my first F1 season is more than I expected.

“Personality of the Year? I’m not sure why I won that, but it’s nice to know the media like me!”

The FIA Personality of the Year award is handed out according to votes cast by accredited media from across the FIA’s Championships. The first round of votes establishes a top 10, with the second round deciding the Personality of the Year. Verstappen’s selection is even more impressive given the media have had just one season to get to know the Toro Rosso driver.

The Rookie of the Year award is decided by the FIA Drivers’ Commission, presided over by two-time World Champion Emerson Fittipaldi. The Commission, made up of drivers with a combined 12 World Championships and 14 Le Mans victories, forms a judging panel for the selection of the most impressive first-year driver in an FIA Championship.

Finally, in the category voted for by motor sport fans from across the world, Verstappen won the Action of the Year award for his daring move around the outside of Sauber’s Felipe Nasr at the fearsome Blanchimont corner during the 2015 Belgian Grand Prix. 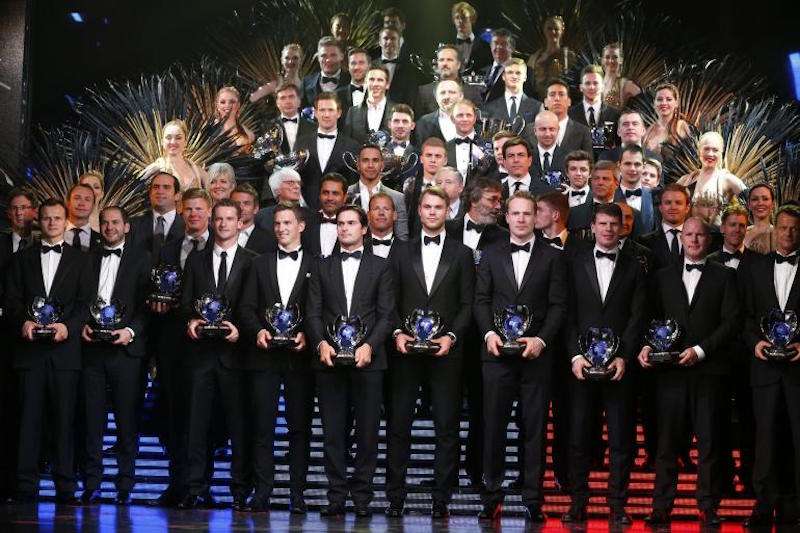 It’s great that Max won some awards but perhaps the bigger story, for we here at FBC, is the tie watch. If you’ve listened for to our podcasts in the past, you’ll know that we keep a keen eye out for who chooses to wear a tie to this black-tie event and who does not. In the past, Sebastian Vettel chose to show up in shirt and jacket, no tie. This year? I’m happy to report that Lewis Hamilton couldn’t be bothered with the tie. 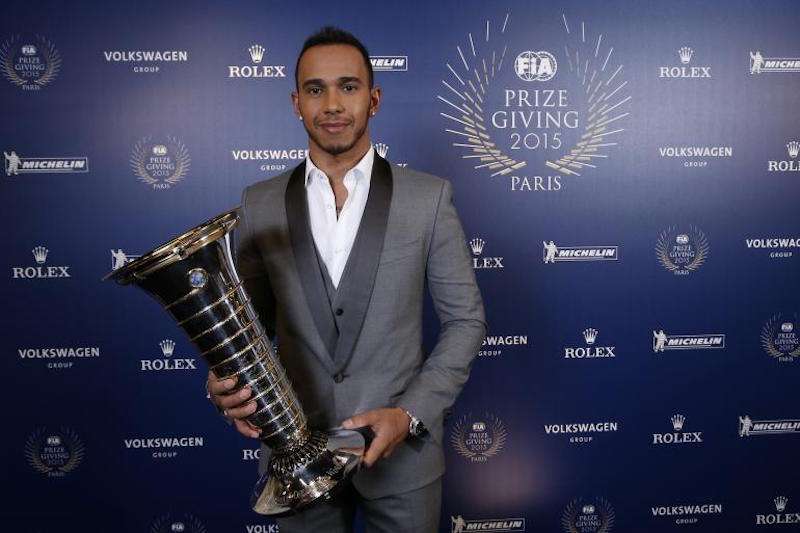 Apparently when you have a peanut sized brain the words “BLACK TIE” actually mean a ghetto suit with no tie.

Herr Igor, kind of hard on yourself, aren’t you?

A tuxedo is a “ghetto” suit?

I have trouble decerning what’s sarcasm or not, but I guess I believe you.

Hello, Hamilton? There’s a reason why they call that a “black tie event”. :P

Lewis was clearly robbed of his Personality of the Year trophy. Surely a curated social media campaign and being #blessed should be enough to beat a plucky teen who simply tells it as he sees it. What’s up with that?!?

Did anyone see how awkward and disjointed the presentation of the awards were at the FIA gala? Rather than introduce the presenters of the awards before presenting the winners with their trophies, the winners were brought to the stage to stand there like confused grid boys before the presenters were asked to join them on stage. A quick handing over of the trophies, a lot of focus on taking photos, a couple of fumbled words from the winner and then back to the hosts for the evening. Maybe it would have been better in French. Regardless, I’ll be cheering for… Read more »

Hmmm. Well, I’m not sure who she is either but suffice it to say that there are no bald guys there either and as one, I still do not expect them to hand me the keys to an F1 car because quite honestly having ridden with a champion, I cannot compete at that level. Then again, maybe the F1 community has a thing about bald people. :)

There is something clearly wrong with the group photo from the FIA gala besides Bernie looking towards the door. It is a sausage fest! From what I can tell there is only one woman in the photo who is not being used as a fence. She is not someone I recognise and appears to be standing next to Mr E in the line of dignitaries, so I’m guessing she wasn’t there to receive an award. Even my 3 year old daughter sees that there is something wrong with top level racing when there are no females racing, so she has… Read more »

Previous article
McLaren could improve, there’s enough tokens for it
Next article
Rosberg For The Pass?