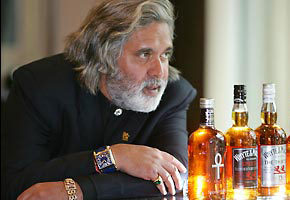 Force India boss Vijay Mallya has responded to A1GP Chairman Tony Teixeira’s comments that force India is setting the wrong example by not hiring an Indian driver. If memory serves correct, this is probably the highest profile comment Vijay has made publicly since starting Force India.

“I am amused by the comments of Mr Teixeira, promoter of the A1GP series, on how Indians should view motorsport in general and Force India’s participation in the FIA Formula One World Championship in particular.

Mr Teixeira is better advised to comment on his native South Africa and his self-styled World Cup of Motorsport that is nothing more than a standard single seater series. Trying to reach out to India’s youth by encouraging participation in and the temptation of winning a title in a series that does not even begin to compare with GP2 or F1 is just promoting mediocrity amongst young Indians who aspire to be World Class.

This, indeed, is a wrong message which seems to be an act of desperation given the huge and growing support for Formula One and the Force India Formula One team.

I am sure that Indians could win so-called World titles at B or C grade levels of any sport quite easily but competing at the very highest international level is not only a matter of pride but proves a Nation’s ability to participate and do so.

The Force India Formula One Team is the first-ever Indian entry in the FIA World Championship and has harnessed international resources. This cannot be commented upon as being negative given that the Indian National Cricket Team has long had foreign coaches, the best of Indian Technology Companies have harnessed international resources and the much celebrated Tata Nano car has imported components. For that matter the World Champion Ferrari Formula One Team has Brazilian and Finnish drivers and is no less Italian in the process!

As far as Mr Teixeira’s comments on how the Ferrari association with the A1 series will stimulate interest, perhaps I should remind him that Force India F1 cars are also powered by Ferrari engines.

I question Mr Teixeiraâ€™s competence in speaking about the aspirations of our Indian youth and what message should be sent to them in the context of Motorsport. Perhaps I should remind Mr Teixeira that my companies reach out to hundreds of millions of Indians each day through our products and services and we are not only better informed but equipped to meet the aspirations of our youth. And I certainly will not tempt them with mediocrity or false pretences.

2
PLEASE not another street circuit. PLEASE. Best thing that happened ...
2
Who wants to go to Austin in November dragging coats ...
2
I don’t like this and I have never liked Pirelli ...
2
I suspect it would be at the corporate level but ...
2
Grace, while I love your commentary your comment that you ...

Is Red Bull hiding its…
14 minutes ago by Fabio
I reckon Christian could get the Spice Girls back, or ...

Is Red Bull hiding its…
6 hours ago by Xean Drury
First, I predict their test livery will be a negative ...

Grown Ups | The Parc…
10 hours ago by Negative Camber
Well, there you go. Another thing for millennials to be ...

Grown Ups | The Parc…
1 day ago by Fabio
Well I’ve been very disappointed with the car launches so ...