The worst team in Formula 1

As we may lament the demise of the HRT team and miss all the jokes that they sometimes were the butt of, I often think back to a simpler (to get an F1 entry anyway) time where the grids were over brimming with teams and drivers The grid was so full in fact that sometimes they’d have an hour at the break of dawn to fight for the chance to even be allowed in an official practice, then still they would have to beat 4 others to get in the race!

This, in fact, was the catalyst for the 107% rule that was HRT’s prime competitor in the last 3 years. As Bernie barks of less is more and others fight for their right for more in the party, when you look back at these times you may be able to see Bernie’s point of view a little. After all he had to deal with these fly-by-night teams and find them a place in the paddock, at least for a day anyway.

Hard to understand where or why these teams managed to get a car on the grid, but the Italians seemed to have their fair share of Formula One supremo dreamers or money launderers. So a great basket full of candidates for the worst F1 team ever, although sadly this group was not just limited to this time as we will see here in a minute.

So as far as this goes HRT are way ahead of the pack, perhaps the victims of an initiative gone sour at first , but I think stability was crucial to these new entries to the F1 circus and that they did not achieve. Unfortunately the young up and coming Pedro De La Rosa may not get another shot again.

So lets look at a few candidates for the worst of the worst.

Just to put to bed the notion that USF1 must surely have been the worst as they couldn’t even join the HRT’s on the grid in 2010, sometimes though it’s a matter of knowing when to fold them, and I see no shame on giving it a try, surprisingly in fact if you look back there is a long long list of teams that announced , drew up, or even tested their cars but never made it to the front gates of a Grand Prix, look them up, it’s a fun game for the whole family!

So moving on lets look at the contenders (or not as it works out). 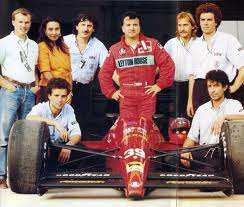 As the likes of Senna, Prost, Mclaren & Ferrari duked it out for the world championship, Life F1 team was created by Italian businessman Ernesto Vita. It was initially conceived as an engine supply co. Vita bought the rights to this W12 motor in the hopes of being a supplier to current F1 teams, this failed so of course he decided to start up his own team as well, what could possibly go wrong? So they bought the still-born FIRST racing team’s design and adapted it for their needs, but not very well of course.

The car was the heaviest and the engine the least powerful and the handling was not great either—a lethal combo to say the least. The first driver was F3000 graduate Gary Brabham—I can’t remember how he got involved but I heard several stories from Gary on this team and it’s “suspect ties”. Needless to say, Gary got two attempts in the Life F190. The first being the USGP (40 secs off pole) and the second in Brazil which ended quickly in pit lane as the mechanics “neglected” to put oil in the car.

Lets just say Gary didn’t go back for lost wages and was happy to escape from the ordeal with everything attached. In a perhaps sadder state of affairs, enter F1-veteran Bruno Giacomelli who after seven years out of F1 couldn’t exact much of a change as the car never came close to making it through pre-qualifying and could barely turn a lap before expiring—even a change of engines near the end could not help the teams results and it disappeared with a couple of races to go in the season. 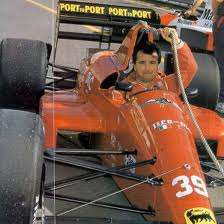 This would seem to be the beginning of the end of the Lola brand (creator and owner of Lola Eric Broadley apparently couldn’t resist the allure of F1) after years of extremely successful participation in Indycar with the likes of the Andretti’s and Nigel Mansell to name a few champions who drove their cars. They also were design partners for F1 teams like Larrousse although not as successful.

Urged on by the availability and fear of losing funding from sponsor Mastercard, Lola jumped into the 1997 season very late in the day to join fellow F1 rookies Stewart who eventually became the Red Bull team, (talk about a tale of different outcomes!).

Alongside a makeshift development of the Lola Indycar design technology they also tried to initially have their own V10 but had to settle for a Ford. With the 1996 107% rule now in full force and with no pre-season testing to speak of, their tale was very similar to the HRT team and the outcome even more disastrous as neither the reasonably talented Riccardo Rosset or Vincenzo Sospiri could get within 10 seconds of the top qualifying mark. (Stewart would be in P11 with Rubens Barrichello!).

Not entirely sure of this Mastercard “sponsorship” but it unraveled very quickly and the team folded before the next GP and sadly the company went into receivership because of it. The Lola brand name was certainly tarnished because of it and although they recovered somewhat with new ownership the hey day was gone, Enter Dallara to pick up the pieces. 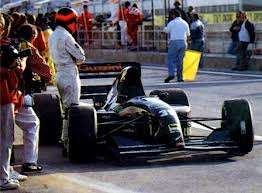 Another great contender for worst of the worst would have been the Coloni F1 team, if only this severe under achiever (with only qualifying spot at Monaco in 26th position) had not they been snapped up by the Italian shoe manufacturer Andrea Sassetti.

After not being able to provide a running car at the first couple of races both Alex Caffi and Enrico Bertaggia were fired for their comments on the team, enter future Stig Perry McCarthy and super sub Roberto Moreno. If you’ve read McCarthy’s book it is full of the trials and tribulations of his year in F1. Bertaggia came back with money in his pocket but rules defined that both drivers had to remain. McCarthy did not get a fair shake at the very short stick, even having to try and qualify on rain tyres in the dry!

The car never qualified and as the season wore on unpaid bills and an ever-reducing work force ended with the team being banned from the sport for bringing in into disrepute.

I have to thank my Twitter friends for some good suggestions on this and so with that we have some honorable mentions like Modena Team Spa & Coloni of course. In an era of some of the most beautiful F1 cars, they didn’t actually look too bad but execution was, of course, very lacking.

In the surge of teams some drivers may have ruined their F1 careers by accepting a role in a pathetic team but some drivers as well as teams shouldn’t have gotten the shot in the beginning. The allure of being deemed an F1 driver is massive and what most drivers, no matter where they end up, would have dreamed of at some point.

So HRT are indeed gone, but are they really needed? Every team has its growing pains to become competitive, and some could never achieve it in a month of Sundays. A field of also-rans does not a great series make and like Life (pardon the pun) it can be survival of the fittest and some don’t survive.

Perhaps we need a restructure of the whole Formula car format where teams in GP2 would have to race what they designed (that was the case before) but the financial layout of racing is skewed. There’s enough money being spent in comparison to those times, but it’s now going to the must-have extras of the modern racing team rather than the nuts and bolts of a car, leaving the spec cars to reign.

Previous article
Ecclestone: German bribe case could cost him his job
Next article
Rolling Speed 8- How much does a Formula 1 car weigh?