With the recent news that Pirelli expect laptimes to make a dramatic improvement this season (thanks to Power Unit manufacturers extracting more from the new regulations). I thought I would take a look at how laptimes had varied over the past few years. I went back to 2009 when the rev limit of 18,000rpm was introduced to the 2.4 litre V8 engines, with a limit of 8 engines per season for each driver. I looked at laptimes at three Grands Prix each season (Australia, Hungary and Japan) representing races at the start, middle and end of each season. I looked at the fastest laps recorded bu each team in qualifying and expressed that lap time as a percentage of the fastest lap set in 2009 (usually in Q2 due to the format of qualifying in that year).

Team names are those used in 2014, but lap times from earlier seasons refer to the previous iterations of the team (Brawn – Mercedes, Renault – Lotus, BMW – Sauber, Virgin – Marussia, Lotus – Caterham). For the purposes of the graphs the times shown for Marussia and Caterham in 2009 are forced to 107% as they did not compete in that season, and both Toyota and HRT have not been included. 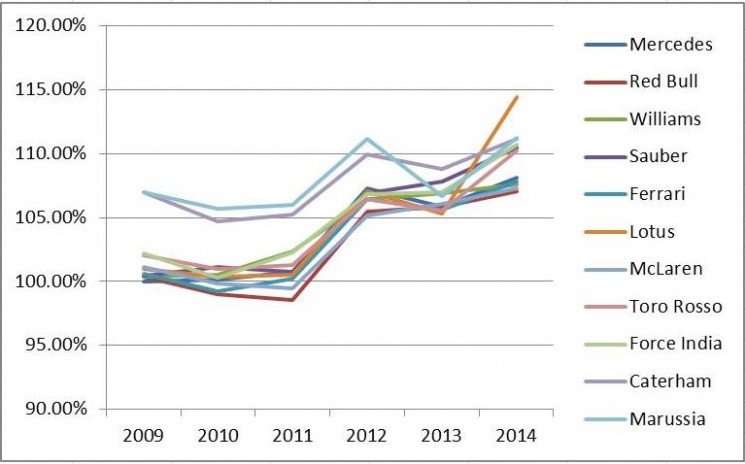 The Brawn team were fastest overall in the opening race of 2009 with the first seven teams within 1.11% of the fastest car, the slowest team within 2.23% of the fastest. The 2.4 ltre V8 regulations had been in existance for a number of years, and the reduction in maximum revs made them more reliable.   Through the next two years Red Bull proves to be the fastest at this Grand Prix, and get faster overall. However this trend is not consistent with only McLaren also getting faster in each of these years. Some teams (Mercedes and Williams) got steadily slower during this period, while other got faster in 2010 before slowing in 2011. The end result was an increased field spread between the fastest and slowest cars on the grid (this is before we take account of the ‘new’ teams that were markedly slower than the rest of the field).

Regulation changes in 2012 slowed the whole field down by 5 or 6%, and McLaren proved to the the fastest at this race. This slowing of the field did however reduce the field spread with the newer teams not losing as much ground as the better funded outfits. For 2013 a few teams made improvements, most notably Caterham and Marussia but also Ferrari, Toro Rosso and the pole sitting Lotus. Into 2014 and all teams slowed down, Williams by only 0.576 second while Lotus dropped 7.719 secons as the went from fastest to slowest in the field. Also noteworthy was how the field split into two distinct groups (excluding Lotus) with Marussia and Caterham now very closeto Sauber and Force India. 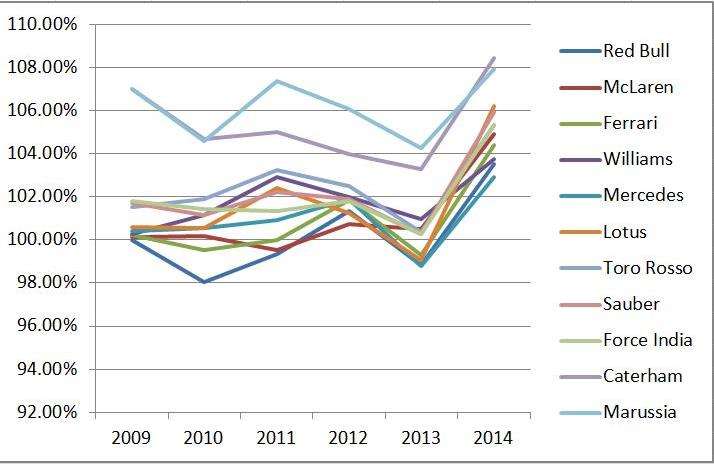 By the middle of the season at the Hungarian Grand Prix in 2009 Red Bull had crept ahead of the Brawn team (as the financial difficulties were beginning to show in the lack of development). The fastest six teams were now within 0.28% with Toro Rosso, Sauber and Force India between 1.51 and 1.8% slower than the Red Bulls. While Red Bull, Ferrari, Lotus (then Renault), Sauber and Force India went faster in 2010, only the back of the field Force India managed to continue improving into 2011. The pace of development through the season has spread the field compared to the beginning of the season. 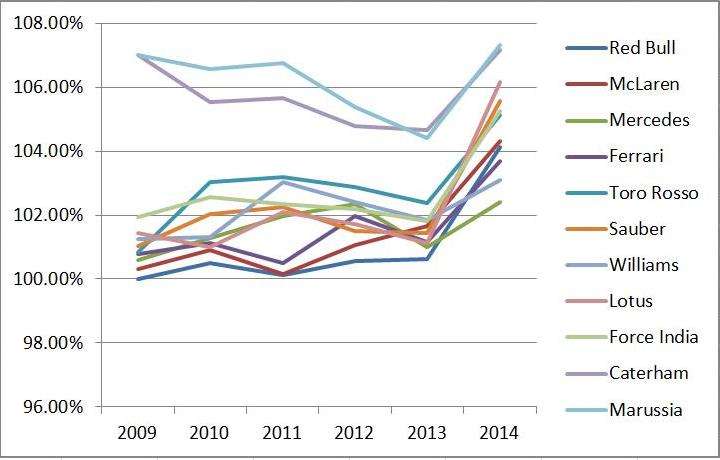 Towards the end of the season in Japan and the effects of teams switching to develop the following season’s car spreads the field more than at other times of the year. However for those at the front still fighting for the championship the pace of development means that lap times remain far more consistent from year to year (the fastest Red Bull staying within 0.64%of the 2009 lap time all the way through to 2013). The drop off in lap times in 2014 is similar to that at the Hungarian race when compare to 2009 (Mercedes 2.4% slower than in 2009), but they are far closer to 2013 (dropping only 1.39% in Japan compared to 4.14% in Hungary from 2013 to 2014).

So if Pirelli are correct and lap times drop by two to three seconds in the coming season, we could see lap times faster than 2012 at the beginning of the year and approaching 2009 speeds by the middle of the year (assuming the rate of in season development follows 2013). The big concern I would have is if it is only the fastest ‘works’ teams that find the full three seconds, with customer teams able to find much less. We would then see the field spread apart and with that the ability of the drivers to race someone from another team would be reduced.