Then and Now – Is Mercedes really THAT dominant?

Much has been made of Mercedes domination over the past two seasons, with Tod even going so far as to say on the podcast that there has never been a period of domination by one team like this.  While Mercedes have started from pole 18 times out of 19 races and gone on to win 16 of the events over each of the last two years, is this truly unique?  I thought I would examine the statistics of the Constructors Championship since its inception in 1958 to see where the 2014 and 2015 seasons rank in terms of domination by one constructor.

As the number of events has changed over the years, as has the scoring system, I converted all the figures to percentages so we could compare like with like.  Mercedes’ total points for 2015 (with 25 for a win, 18 for second place and all 19 rounds for both car counting) is always going to be higher than Vanwall’s total from the 1958 season (where only the lead car scored, with the maximum 8 points for a win and only the best 6 events from the 11 round season were counted).

The area where Mercedes appear to be most dominant is in the number of pole positions, with the team pn pole for all bar one race in both 2014 and 2015.  However this has been done before: 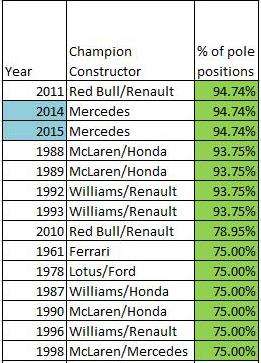 Red Bull were the first team to get 18 out of 19 poles in 2011, but both McLaren Honda and Williams Renault have had back to back seasons only droping one pole (in 1988-89 and 1992-93 respectively), it is just there were fewer races in those seasons so the percentage is lower.

The number of wins that Mercedes have scored is impressive over the last two seasons (18 races in each year), however while this is one win more than McLaren Honda managed in 1988 and Ferrari managed in 2002, the greater number of races in the season means that their percentage success rate is lower: 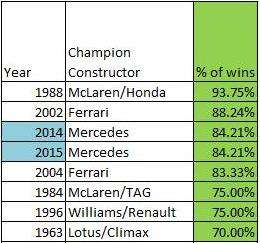 If rather than looking at the percentage of race wins we look at the percentage of the maximum points available, then Mercedes recent performance slips even further.  In the early years of the championship the reliability was much worse than it is today, and only the best scores were counted (as stated above in 1958 the best 6 results from 11 races, in 1959 the best 5 results from 9 races).  Later on this was changed so that the season was split into two halves, with the worst result dropped from each half of the season.  Also in the years from 1958 – 1978 only the lead car of each constructor scored points, from 1979 onward (with constructors now limited to racing two cars) both cars scores counted to the constructors championship: 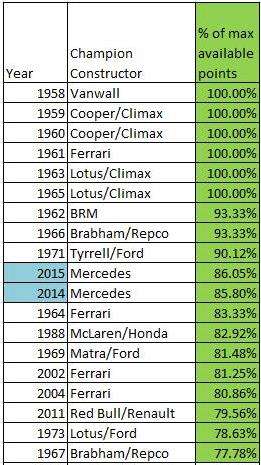 As a result of dropped scores the champions scored 100% n six out of the first eight championships, in fact in 1963 Lotus Climax won seven races, and only the best six rounds counted.  Mercedes recent performance is a long way from these dizzy heights, but they are the best since 1979 when all points scored by the constructor are counted.  McLaren Honda come closest in 1988 with Ferrari in 2002 and 04 and Red Bull Renault in 2011. 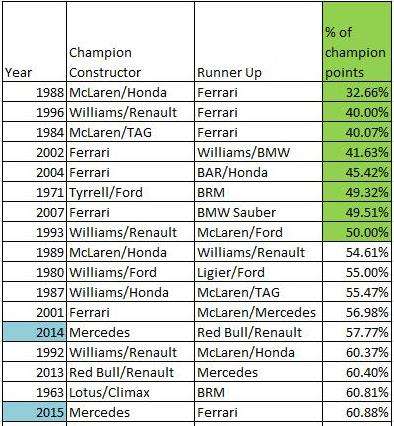 This table considers all the points scored by the constructor (it ignores anydropped scores).  The anomolies thrown up by dropped scores are shown at the bottom of this table, where on three occasions the runner up equalled or scored more than the champion team:

Finaly I looked at how soon through the season the Constructors Championship was settled, this as a percentage of the overall championship length.  Again, while the recent Mercedes performances are strong, they are far from being in a class of their own: 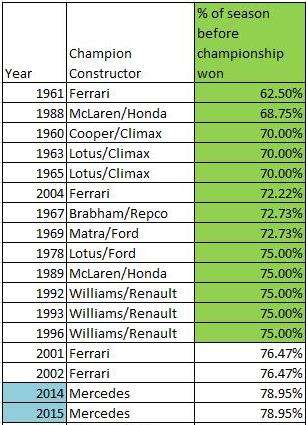 So what do you think, is Mercedes undoubted domination somehow different from that which has gone before, or is this just another short period following a rule change where one team has got it right and the others take a while to catch up?  Let me know what you think in the comments below.

Excellent analysis. It certainly proves Todt wrong. And leaves the impression that the talk about Mercedes dominance is partly spin.

Poor attempt to cover for Mercedes in this article. Fact Mercedes has the ability to turn up the wick at any moment they choose. We have yet to see the Mercedes at 100% and I suspect we have only seen them at no more than 90%.

Oh now, Bill. Let’s not be grumpy. Nothing Dave does is poor in effort. You bring up a great point though regarding the in-pocket performance it’s just that we haven’t seen that element in the actual numbers. They haven’t had to turn the wick up and still look good but as you say, should they really let it fly, then things could start to get wobbly.

Others have had Power Unit failures when they have turned the wick up while Mercedes haven’t needed to. However Rosberg’s dramatic failure at Monza my indicate that they don’t have that much in hand. Yes they could possibly run with higher power, but not without taking grid penalties late in the season.

Rosberg was running an old engine that was past its use-by date at Monza. A better example would be Hamilton in the same race, who was told to push flat-out towards the end in order to get more than 20s ahead of Vettel in order to avoid a possible penalty over tire pressures. He immediately put in 5 laps doing half a second faster than his previous laptimes, indicating he had plenty of speed in reserve.

Whose to say that dominant teams in the past haven’t also had the same ability to turn up the wick. Reliability was a much bigger issue in times gone by, requiring cars to be driven accordingly.

OK, that’s one way how to present history based on statistics, but what does it actually means, if anything? For one, I think it leads you in (false, IMO) believe, that situation is not unusual when compared to past. Any assertion of this kind could be however challenged. One cannot do so convincingly in couple of sentences, but go back and study when Mercedes began its development of PU in comparison to their competitors (while others directed resources into actual racing), thus factor of uneven GETGO time lines moves them into unique position, which itself means nothing, until you realize… Read more »

Mercedes failed to win on three occasions in 2014 & 2015. In 1988 McLaren failed to win only once, and that was when Senna collided with an inexperienced backmarker while lapping him two laps from the end. At the time he had a comfortable lead. The three occasions when Mercedes have lost in each of the past two seasons, at least one Mercedes has been running, they were beaten on pace on the day (not by reliability or race ending accident). I fail to see how McLaren in 1988 is less dominant than the current Mercedes. A similar argument could… Read more »

Thanks Dave, another insightful review, I’m pleased to have some facts to support my opinion that the recent Mercedes dominance is nothing new. The fact you have had to resort to statistics demonstrate this, and some of the responses to the article, kind of reinforce my view that one current problem with F1 is social media! Previous era of F1were every bit as technically challenging and exciting (or complex and tedious) as the current regime, but as little as 15years ago information on the sport was in one direction (tv coverage and magazines were the opinions we were exposed to),… Read more »