In Pocast 449, Todd and I discussed the comparative lap times between the end of the V8 era (2013) and the start of this new era with hybrid Power Units.  There have been a lot of comments about how mch slower and less challenging this new breed of F1 car is when compared to the earlier (louder) V8s.

First of all if we examine the outright pace of the cars in qualifying trim, the only time we really get to see this is during qualifying itself, although hints can be given during free practice 3 when teams perform some simulations.  However as the track evolves over the race weekend, qualifying itself is normally quicker.  What I have done is looked at the fastes individual laptime of each team over the race weekend, this is normally during qualifying, but on occasions when it rains on Saturday this may be on the Firday, or on occasion even during the race.

It is possible to compare the qualifying laps for some race for the past three seasons: 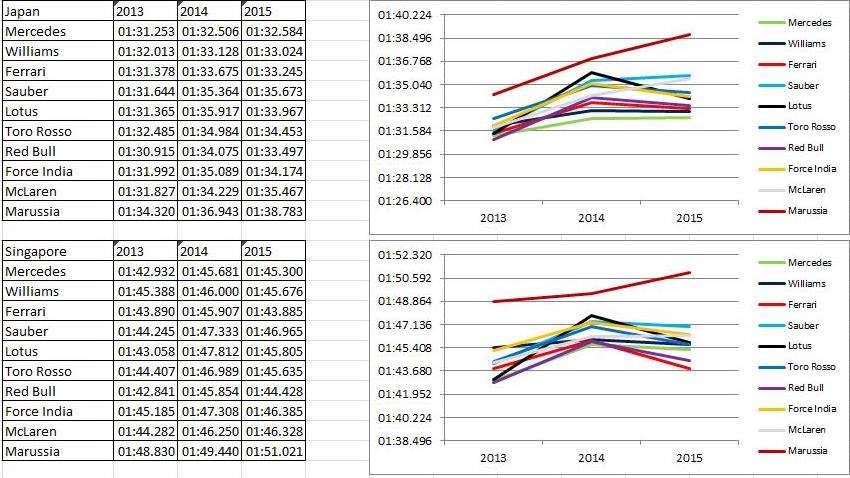 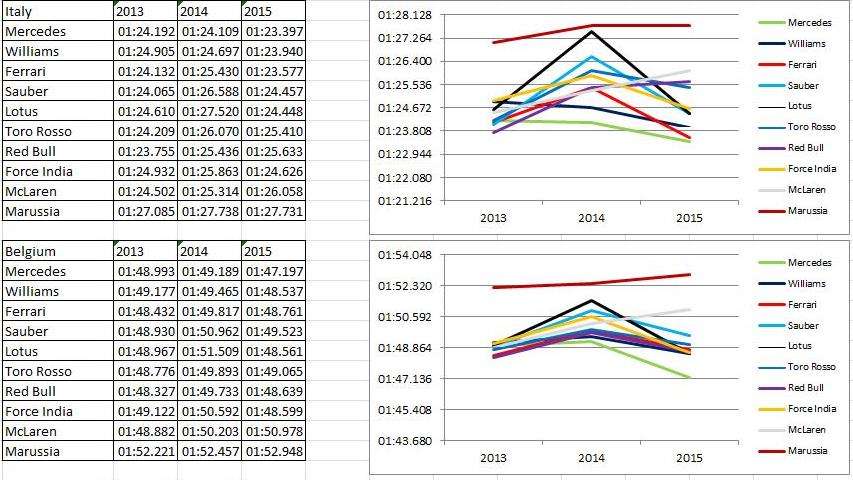 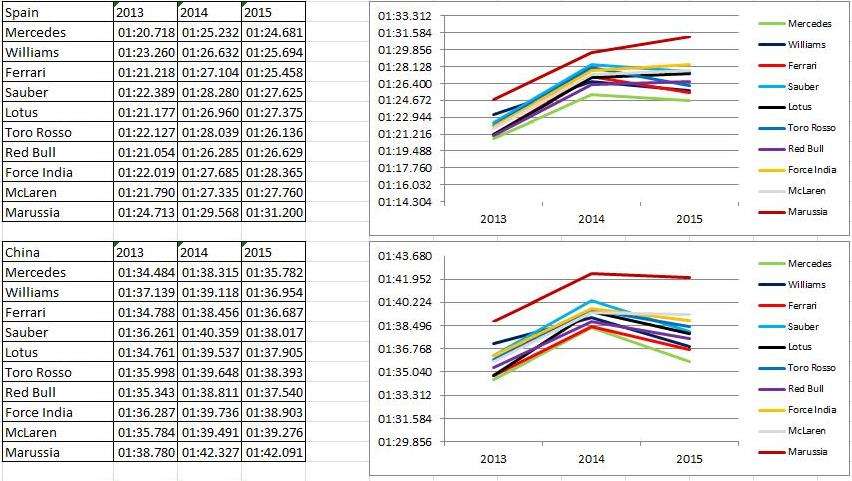 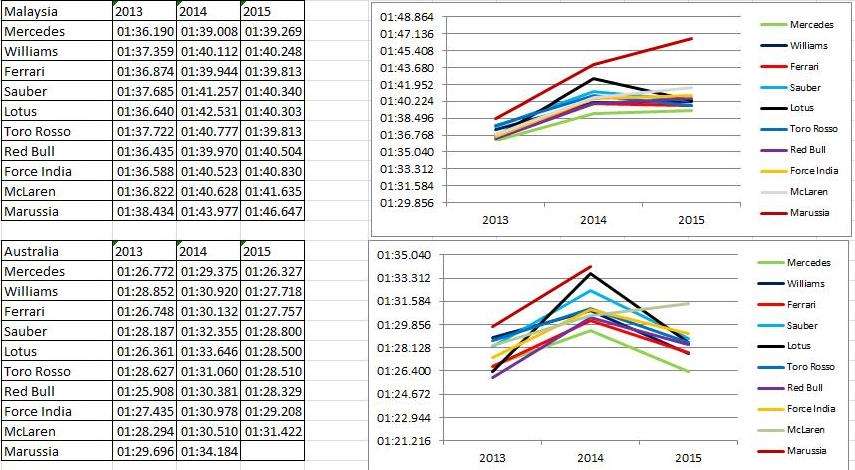 All these races show that the times dropped off dramatically during the first year of the new regulations, and while they have not fully recovered back to the V8 outright pace at all locations, they are nearly there.

So the outright single lap pace probably needs until 2016 until it will be as quick or quicker than the V8s everywhere.   Next we will look at overall race pace.  Here I looked at the overall race time for the winning car and divided that by the number of laps to get an average pace.  This is only going o be a fair comparison in races uninterrupted by a safety car (or rain).  The table below shows the times:

There are only six races that have been uninterrupted in both 2013 and 2015 (Bahrain, Spain, Canada, Italy, Japan and Brazil).  As mentioned in the podcast, Brazil has been resurfaced since 2013, and new kerbs were added this year, so this is probably not a fair comparison.

Bahrain, Canada and Italy ended up being faster overall this year than when the V8s were running, while Spain and Japan were slower.  As the Spanish race was also uninterrupted in 2014, it is also possible to compare those times, and despite the development of the cars over the preceding 12 months, the 2015 race was slower than the 2014 race, so something odd was happening there.  I can’t recall any changes being made to the circuit so maybe it was #justthewind ?

Overall, it looks to me that the current generation of F1 cars are very close to the pace of the last of the V8 era.

There were two key changes in the 2014 season. The most obvious change was the deletion of the 2.4 litre V8 engines and the addition of the 1.6 litre V6 hybrid Power Units. The less obvious change was a siginificant reduction in downforce by removing the ability to energise the rear diffuser using exhaust flows; reducing the width of the front wing and lowering the nose, and thus reducing the air flow under the floor and reducing the performance of the rear diffuser. From memory, this was intended to reduce downforce by up to 20%. The aero changes have had… Read more »

Was this adjusted to account for the races that were wet? That will have a rather big effect on lap times.

The graphs are from the fastest lap times over the weekend. Where qualifying was wet this may be from a dry free practice session. Austin in 2015 was the only event where every practice and qualifying session was affected by rain. The fastest times come from the race, and as a result the race is not included in the graphs above.
The table of race times, the ones that I have mentioned in the article are the only ones where the race was dry and unaffected by safety cars in both years.

Hi MIE, if you do the same for 2004, you’ll see how much quicker F1 cars were over a decade ago. The circuits are much safer now so F1 cars need to be much faster -8s a lap would be greatly appreciated. The top speeds now are competitive, but cornering without ground effect has slowered cars immensely. Pirelli are weak at producing F1 tyres that the best F1 drivers can push 100% with throughout the stints. 2017 Hemberley want high degradation tyres again? What a muppet he is. 2013 all over again #SilverstoneGP Pirelli Scadal

I don’t see it as being Pirelli’s fault as they are manufacturing tyres to the specifications of the FIA. Pirelli have been asked to recreate Canada 2010 where the tyres were dropping off during the stints and that is what they have done. If Pirelli were asked to provide a consistently fast tyre that can last 100km, 150km, 200km or 310km then I’m sure they could do just that.