Then and Now – the Good the Bad and the Ugly

Prompted by Todd’s comment on Podcast 417, that Ferrari have suffered bad seasons in the 1990s much as McLaren are now, I decided to take a look at the statistics of the four teams that have been present in the series since 1990. These are Ferrari, McLaren, Williams and the team from Enstone (variously known as Benneton, Renault and Lotus during the period). Between them these four teams have won 346 races between 1990 and 2014, with 432 Grands Prix held during the period, this means that only 86 races were won by someone other than these four teams.

Looking at the Constructors Championship first, over the 25 year period these teams have dominated for the most part, winning the first 19 championships between them, only Brawn in 2009, Red Bull 2010-13 and Mercedes in 2014 stopped them.   However, only Ferrari has constantly been in the top four, all the others have dropped out at some point. McLaren’s disqualification in 2007 means they are officially recorded in 11th place, but they have been fifth on three occasions (2004, 2013 and 2014). Williams dropped to fifth in 1999 before regaining ground, but then from 2005 until 2013 they only had one year inside the top 4 (2007 in fourth) before regaining third place last year. The Enstone team’s results have been more inconsistent, enjoying brief periods of competitiveness as Benetton and Renault, but the team has spent nearly as long outside the top four as Williams (seven seasons compared to eight). Over the period the average championship positions for these teams is:
Ferrari – 2.28
McLaren – 3.12
Enstone – 3.92
Williams – 4.08 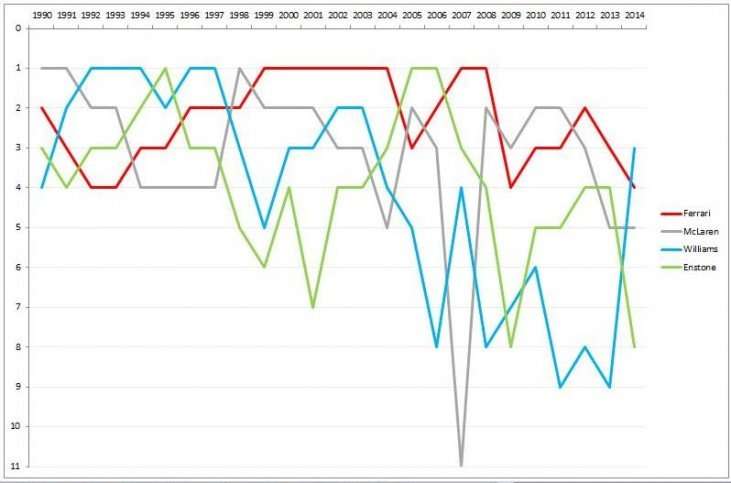 The graph above demonstrates that in recent times some newer teams have come in to challenge the more established outfits with Honda / Brawn / Mercedes and Red Bull becoming regulars in the top four of the Constructors Championship.

A similar position exists for the Drivers’ Championship, the World Champion was driving for one of these four teams from 1990 until 2008, with the title only going elsewhere in the last six years. Ferrari has the greatest number of titles over the period followed by McLaren with Williams and Enstone tied:
Ferrari – 6
McLaren – 5
Williams – 4
Enstone – 4

Again, the lowest placed lead driver for Ferrari is better than the lowest placed lead driver of the other teams. Two seventh places are recorded, in 1992 and 1997. However the 1997 result is as the result of Schumacher’s exclusion from the results following his final race collision with Villeneuve (he kept the wins and points, but not the championship position). McLaren also has a couple of seventh places (1995 and 2004) but their worst drivers finishing position was ninth in 2013 followed by eighth in 2014. With Lotus having such a poor year last year (Grosjean finishing 14th) Enstone is next in line. Williams though have had the poorest results over the period with a couple of 17th places in 2011 and 2013 being the low point. The graph showing the championship position of the best driver in the teams is below: 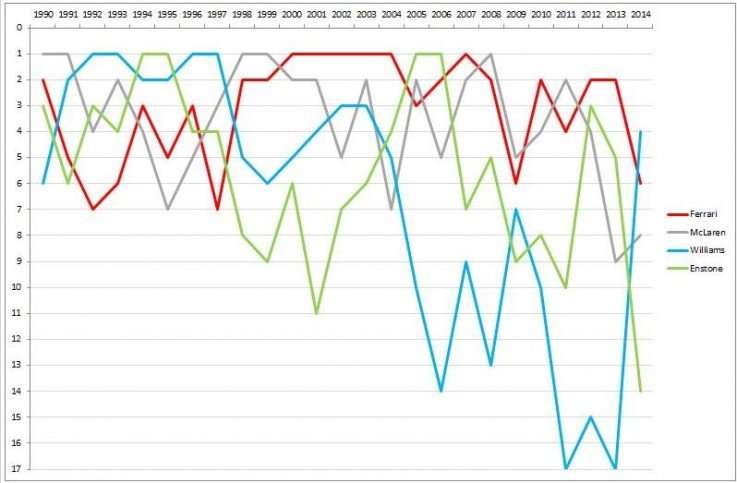 When it comes to race wins over the season then it is true that Ferrari have had some lean years. There were no wins at all for three years from 1991 to 1993, a feat repeated in 2014. McLaren however have equalled that three year drought, with no wins between 1994 to 1996, and followed it up with winless seasons in 2006 and for the last two years. At Enstone, they went without a win for five years (1998 – 2002) and had six other years without wins. While Williams were winless for seven straight years from 2005 – 2011 before Maldonado surprised everyone in Spain in 2012. They also managed to avoid the top step of the podium for five other seasons.

With the wins spread out as shown in the graph below: 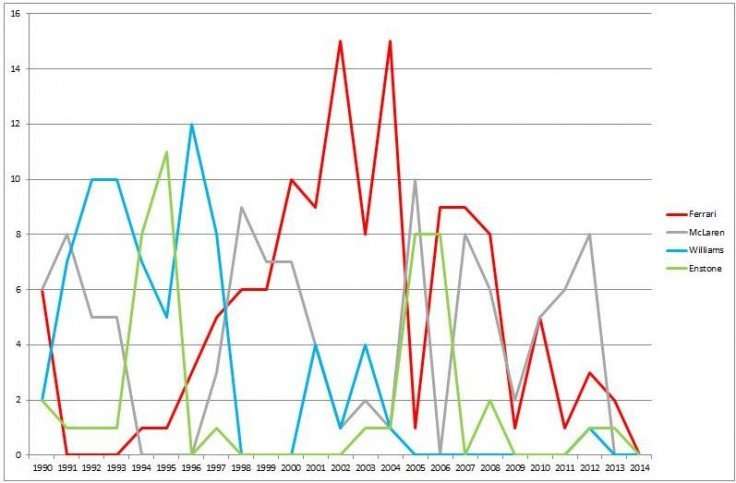 This picture is reinforced if we examine the total number of podium positions scored in each season, again Ferrari dominate:
Ferrari – 350
McLaren – 295;
Williams – 193;
Enstone – 169.

The lowest number of Ferrari podiums during a season is two, a feat they managed twice (1992 and 2014). McLaren managed not to score a podium in 2013 and only managed two last season. Enstone have managed two seasons without picking up a single trophy (2002 and 2014), While Williams have managed this dubious feat on five separate occasions. The spread of podiums throughout the last 25 years is shown below: 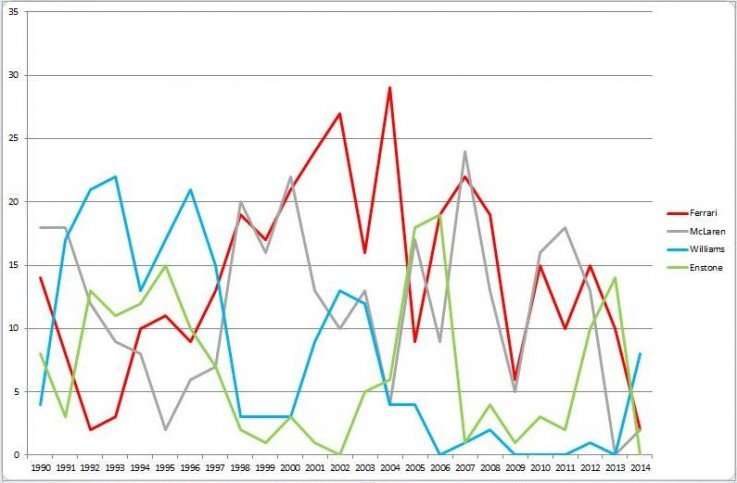 I think therefore that wile it is true that Ferrari have had some years where they haven’t performed to the high standards expected by their dedicated and passionate fans, they have not had as bad a season as any of the teams that have managed to survive in the sport over the last quarter century. Specifically when compared to McLaren over the last two years, Ferrari have not had a season that is as bad as either of these (fifth in the Constructors, ninth and eighth in the Drivers, zero wins and only two podiums). As the starrt of 2015 is even worse (zero points and only four finishes out of eight attempts) perhaps it is understandable that the McLaren fans aren’t quite as excited by the improvements shown by the team.

However the improvements are there, Alonso was able to get into Q2 and race with the mid-field during the Bahrain Grand Prix. This is a massive improvement from the first race of the season (Alonso finished a lap and 19 seconds behind Hamilton in Bahrain, Button finished two laps and 24 seonds behind Hamilton in Australia). However it is a long way to go before they even think of equalling their own worst season (2013 with fifth in the Constructors and ninth in the Drivers championships). Just four races in they would need over 19 points to be fifth in the Constructors title, and more than 12 points for one of the drivers to take ninth place. To equal Ferrari’s worst season, they would need to finish fourth in the Constructors (currently 23 points), seventh in the Drivers (currently 19 points) and get two podiums. While this may be possible with massive development through the year it relies on one of the current top four (Mercedes, Ferrari, Williams or Red Bull) developing at a much slower rate than McLaren.

So, what do you think, has the improvement shown by McLaren been encouraging, and can they keep it up at a fast enough rate to get on the podium by the end of the season?

Some interesting statistics there, showing how Brawn/Mercedes and RBR have taken over at the top for the past 6 years.

If McLaren aren’t mixing it up with Lotus and Williams by the end of the season, then I would think they’re in for another rough couple of years. There seems to be plenty of potential to be unlocked still; I wonder when they will first manage to run at full power?

I am a McLaren fan boy, and can see that the true potential of the PU will not come to 100% until next year. We expected this year to be rough (if you weren’t busy fantasizing about the original M&H success). The improvements are there and even Fernando sees that Honda is showing up to get to the winning potential. You couldn’t have asked for a better pair of drivers to develop this project. One who drags a car to the rugged edge (FA) and one who knows how to make it work and survive (JB). Patience is key…the wins… Read more »

This is exactly what ferrari have been telling themselves for the last 4 years.