Then and Now – Turbo charged engines in Formula 1

In the pre-war years of Grand Prix racing (well before Formula 1) manufacturers used forced induction to get more power from their engines.  They used superchargers as the technology had been proven in the aero engines of the time (much like four valves per cylinder and overhead camshafts).  The additional load of the supercharger was more than offset by the extra power produced.

The first time that engine sizes were limited was in 1938 and there was a complicated formula with force induction engine permitted to have engine sizes between 666cc and 3000cc with the minimum weight of the car increasing linearly between 400kg (for a 666cc engine) to  850kg (for a 3000cc engine).  For a normally aspirated engine the limits were 1000cc to 4500cc, again with the minimum weight varying between 400kg and 850kg.

Formula 1 came into existence in 1946 with a set of regulations by the then governing body the Commission Sportive Internationale (CSI) of the FIA.  Allowable engines were 4500cc normally aspirated or 1500cc forced induction.  This allowed the existing pre-war 4.5 litre Grand Prix cars to race against the pre-war  1.5 litre supercharged voiturettes.  The 3 litre supercharged Grad Prix cars (from Mercedes and Auto Union) were banned.

The World Drivers’ Championship (WDC) started in 1950, and initially the 1.5 litre supercharged cars were dominant.  The winning Alfa Romeo 159 produced about 420 bhp from its 1.5 litre engine, but used between 125 to 175 litres of fuel per 100km.  Enzo Ferrari decided to develop a normally aspirated engine, and in 1951 his 4.5 litre V12 only used around 35 litres of fuel per 100km.  With Alfa Romeo withdrawing from competition at the end of 1951, there was no viable opposition to Ferrari in Formula 1 for the new season.

This regulation sat on the books for over a decade before anyone took any real notice, then in 1977 Renault decided that there would be an advantage to a small capacity forced induction engine.  This time they would use a turbo charger rather than a supercharger.  This would remove the mechanical losses of driving the supercharger so increasing the power available.  The penalty was the lag between when the driver applied the throttle and the turbine spinning up to speed and producing full power.

It wasn’t until the tenth race of the season that Renault entered a single car for Jean-Pierre Jabouille.  He qualified 21st 1.61 seconds off the pole time, and lasted 16 laps before the turbo failed.  The team missed the next two races before re-appearing in the Netherlands and qualifying 10th only 1.48 seconds from pole.   The engine was powerful, but the car still didn’t make the finish.  Suspension failure caused retirement after 39 of the 75 laps.

The following race at Monza saw Jabouille qualify only 20th 1.95 seconds from pole, and this time the engine failed after 23 laps.  The teams final race in 1977 was the next race at Watkins Glen, where Jabouille qualified 14th some 2.206 seconds from pole.  Again he failed to see the chequered flag, stopping on lap 30 of 59 with alternator failure.  In Canada the tem failed to qualify, recording a time 7.614 seconds slower than pole, and they didn’t bother making the trip to Japan for the closing race of the year.

For 1978 Renault again had a single car entry, and missed the first two races.  In South Africa for their first event of the season Jabouille qualified in 6th 0.71 seconds away from pole position.  The engine lasted only 38 laps into the race before failing.  The Renault results from 1978 are shown in the following table: 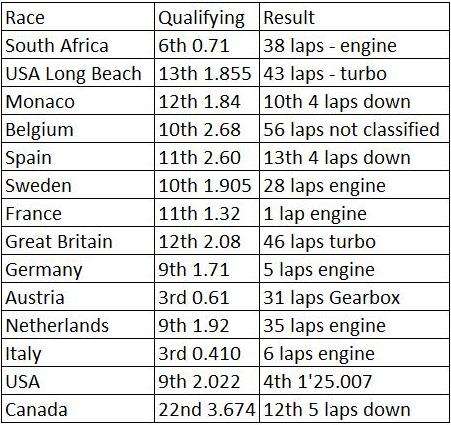 From the 14 races entered there was only one points finish, for fourth place in the penultimate race of the season.  There were three other classified finishes, but each four or five laps behind the leader, and the Belgian race where the car was so far behind at the finish it wasn’t even classified despite still running at the flag.  Eight of the failures were due to the engine or turbo failing with a single gearbox failure.  This makes the current Honda performance look good, and the current Renault performance exceptional.  Don’t forget that the failures recorded here are just the failures in the race, those in free practice or qualifying have not been recorded.

For 1979 Renault entered the entire season with two cars for Jabouille and René Arnoux.  Their results for the year are shown below: 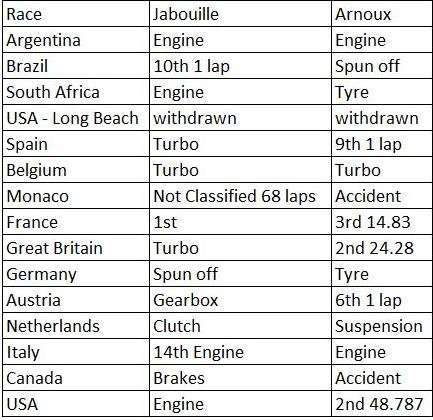 From the 30 race entries (15 races, two cars) there were nine engine or turbo failures recorded.  However there were also four podiums including the first win.  This was enough to convince Ferrari that turbo charged engines was the way to beat the British based constructors who relied on aerodynamics rather than horsepower to win.  With changes in regulations to try and outlaw ground effect, the way was set, and by 1986 every car on the grid was turbo charged.

With qualifying engines now producing way over 1000bhp (the engine dynamometer used by BMW only went up to 1200 bhp, so the actual power output on qualifying boost is only ever an estimate, but 1500 bhp seems like a good number) it wasn’t long before the FIA stepped in to limit the power.  First of all boost levels were limited and then fuel limits were introduced prior to the banning of turbos and everyone going back to normally aspirated engines, this time of 3.5 litres.

Overall, the reliability for the turbo charged engines from 1977 to 1988 is shown in the table below:

As you can see, it took until the final year of turbo charged engines before more than half the turbo charged cars finished the races through the season.  The modern Power Units are not just turbo charged internal combustion engines but have two motor generator units, complex control electronics and state of the art energy stores which all contribute to the potential for failure.  They are also expected to last for five entire race weeends.  It is not really surprising that this is technically challenging, and that some of the manufacturers are struggling.  The last time Honda entered with a turbo engine (when they were dominant in the 1988 season) they only finished 44 times from 61 starts, so 72% of the time (and that would have been with a fresh engine for each race start).

Brilliant article thanks Dave, This really does strip away the rose tint from the ‘first turbo era’. We’ve got used to having very reliable F1 cars, probably as a result of periods where the engine specs have been pretty much static, and had forgotten that F1 used to be about ‘bleeding edge technology, that often didn’t work first time and mostly didn’t work reliably. 20 or 30 years later turbos are so mainstream that they are ubiquitous in every class of road car. Now as you conclude with the current era hybrid power units “It is not really surprising that… Read more »

I think the real f1 fans, suspected Honda would struggle, there were fools who thought they would come in and run up front right away