Then and Now – When F1 cars looked different

From the earliest days of racing form has always followed function.  The cars have never carried anything that didn’t serve a purpose, but the tendency for most designers was to make their creations look elegant.  Before wind tunnels and the all-embracing dominance of aerodynamics many thought that if it looked right it would go right.  However once Colin Champan started copying the antics of Jim Hall’s Chaparral team in putting aerofoils on the top of Formula 1 cars, things would never look the same again.

While the initial high wings mounted directly onto the unsprung parts of the car were banned following the accidents at the Spanish GP in 1968, teams soon found ways of shaping the bodywork to replace some of the lost downforce.  The end result was some of the most inelegant cars ever to grace a Formula 1 grid as slab sided be-winged monstrosities of the 1970’s replaced the classic cigar shaped cars of the previous decade.  The one advantage that this had was the cars all looked different, and even the most optically challenged fan could tell the cars apart.

While undoubtedly there were some cars which are better looking than others, this was the era that gave us the Following:

and culminated in the truly awful…

Since then we have gone through a period when F1 designers once again discovered how to use curved surfaces on a racing car/  In the early 1990’s there were some truly good looking cars on the grid, my personal favourite being the… 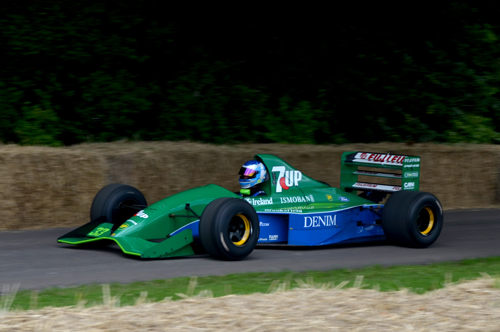 I do wonder if whoever decided on the wording of the nose rules for 2014 was hoping that this year’s cars would look something like the needle nosed cars of that era.  Unfortunately aero is king, and were are left with the current crop of inappropriate noses.

There is one advantage though, once again we can all tell the cars apart, even if the lack of sponsorship means that the McLaren is painted very much like the Mercedes, or the Marussia and Ferrari share a red and black colour scheme.