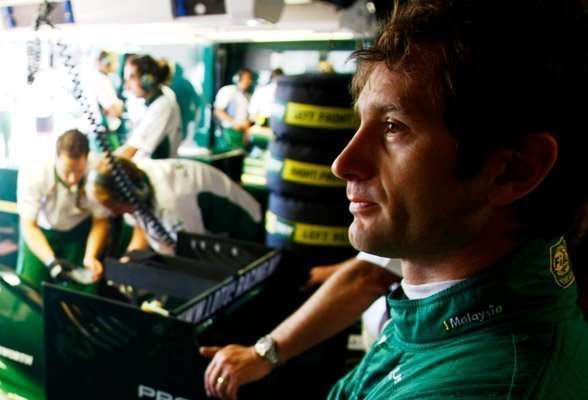 When looking for straight talk in F1, you usually look for Mark Webber and his approach to the issues which has always been no nonsense. The name Jarno Trulli usually doesn’t spring to mind when looking for the heart of the matter. Not that Trulli doesn’t have an opinion or share it, it’s just that’s he’s not the first name on everyone’s list to call on for quotes.

[box type=”shadow”]”Which is the real one? We don’t know, it’s embarrassing, surreal,”[/box]

Many F1 fans agree with Trulli as they attempt to understand the politics and reasons behind the litigation that has left the Lotus name in limbo. The fan comments at F1B alone are enough to prove the confusion and concern of the both Lotus-Renault and tony Fernandes’s team 1MRT.

The 36-year-old Italian doesn’t stop there. He was keen to share his thoughts on the upcoming season in which a host of new technical regulations will enter, or re-enter, the sport. The new tire supplier Pirelli, the KERS system, the movable rear wings the lack of F-duct and dual diffuser technology; it’s all part of a moving target in which the sports governing body says it’s trying to reduce costs.

[box type=”shadow”]”One year I can suffer, another one no,” he said. “When I started there was a lot of quality because many constructors tried to get winning drivers. Now the budgets of many teams are determined by the sponsorships brought in by drivers.”[/box]

The economic decline of the past 18-24 moths has had its impact on F1 and perhaps the most tangible example is the increase in paying drivers or “rent-a-driver” the sport has on the grid. No longer are teams replete with sponsors and the need for individually-backed drivers who bring millions seems easier than assembling a strong marketing package with which the teams sales people can sell. Trulli has opinions on that as well:

[box type=”shadow”]”There are too many new things, from aerodynamics to tyres to KERS. We talk about saving money but each year the rules change, people don’t understand, it becomes less of a show,”[/box]

Is Trulli right? I have to say that I agree with him on bringing all of these changes and the lack of cost-cutting it represents but then the sport has little option if it is to devise an exciting series until 2013 when the regulations change all over again. They have to develop some way to make the sport attractive for the next two years in order to keep a healthy, paying fan base.

Are these comments an example of why most news outlets don’t call Jarno Trulli or is he dead on? What is your opinion? Do you think the sport is once again adding regulations that will increase the cost of F1 instead of reduce it and if so, is it justified?

TPF Podcast Mailbag
7 hours ago by Steve L Henderson
Curious how you guys think the scheduling/cancelation/additions may play out ...

Masi is no Whiting
7 hours ago by Steve L Henderson
I think your spot on. Being an F1 fan since ...