The USGP in Austin was a nice weekend but the total attendance was down from previous years. Back in 2012, I was discussing the race with the Circuit of the Americas marketing director. She was very pleasant and focused on getting seats sold.

Their marketing initiatives were mostly traditional fare and I mentioned then that she should really focus on the third year as the key moment to press for serious marketing and brand appeal. At the time, the new regulations package was being kicked around and one could sense the inaugural appeal as well as the knock-on effect in year two would be okay, but the rubber hits the road in the third year and that’s exactly what COTA faced last weekend.

Gone were the throngs of circuit personnel with smiles and continuous choir asking if they could help us find seats, food, water or anything else we needed. Gone were the professional groups hired to run a Formula 1 race in favor of local, less expensive talent. It was this year that I suggested to COTA that they start planning for, not the first year.

Then there is the season itself with only two drivers in the hunt for a title and both drive for a comprehensively dominant team. The issue of sound also was a common thread and I would be less than truthful if I didn’t tell you that several folks told me they weren’t coming due to these issues. While this may not present a concern for some, it did for race promoter Bobby Epstein as he told Sky Sports:

The circuit announced the attendance over last weekend as 237,406 with 107,778 on race day. In 2013 the numbers were higher with 250,324 and 113,162 on race day. The inaugural year in 2012, they were even higher. A positive note is that the crowd was said to have been larger than the NASCAR attendance that same weekend at Texas Motor Speedway only 200+ miles away.

Reading the local paper in the lobby of the Hilton, I found it interesting how the indigenous press were skeptical of the reported $900 million impact the race has on the city of Austin through tax revenues. The Statesman journalist I read said he was keeping a very close eye on this number and was going to do serious due diligence as he wasn’t convinced.

As Paul and I walked the circuit, trash blew across the sidewalks, black visqueen that covered the sides of the bridges were dislodged with 40 feet of it lashing passersby, concessions seemed to be fewer and more expensive—an $8 funnel cake?. While the stands showed signs of empty seats, General Admission was packed and that, in itself, says a lot about this economy and the state of play for many racing events across the country. 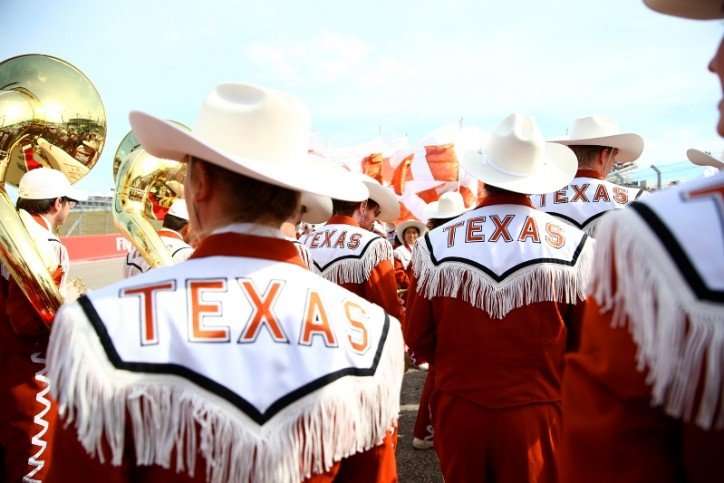 Team shirts were $80 with the matching ball caps at a tidy $50. Even kids shirts were $60 and mugs $20. An 8oz can of Red Bull was $5 while even the team jackets were $180. It seems to defy logic in the traditional sense of marketing.
Many folks asked me about the sound of the cars. Here is what I can say:

The Ferrari 458’s in the Ferrari challenge registered 98db from our location at the exit of turn 1 while on full throttle. The F1 cars were 98db at the same exact spot. The Porsches were 96db.

You could hear the car but definitely couldn’t feel them. They short-shifted a lot and it was a disconnect for the brain because while the internal combustion engine/turbo was short-shifting, your head assumes that it is not picking up speed when in fact the silent hybrid is applying speed to the car—you just don’t hear it and so your brain doesn’t register that the car is really accelerating.

That’s the nature of the beast but it requires a re-training of your brain. The hybrid is pressing hard but the ICE is shifting down and lowering revs. It was an odd experience for me but I will say that the cars sound much better live than on TV and I though the Ferrari sounded the best of all of them. I will mention that I thought the McLaren lump sounded more wound than the Mercedes power unit in the works team or Force India and Williams.

No ear plugs needed at this race and conversation was lively and plentiful during the race and while that great when you’re trying to hear Paul explain the driving techniques, it can be a buzz kill when you have to listen to the drunk next you wax poetic about his knowledge of positive traction rear ends and how he has a tubbed-out 1970 Chevelle that can do 7-second quarter miles.