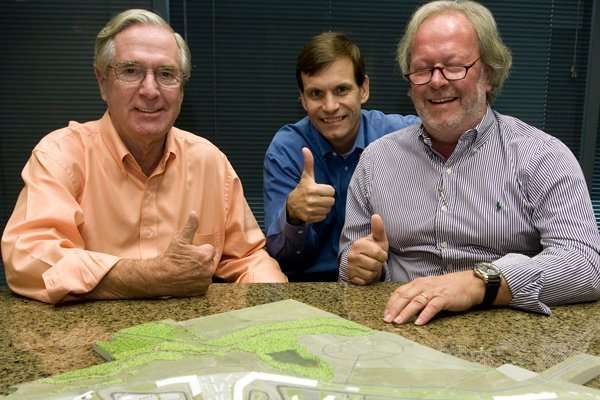 The United States Grand Prix (USGP) is one step closer to their goal of hosting a race just outside of Austin Texas in 2012. According to the Statesman, the plans for the Tilke designed circuit have been submitted to the FIA for their approval. A meeting held in October with FIA delegate Nick Craw was productive according to promoter Tavo Hellmund of the Full Throttle Production group. Hellmund said:

“Tilke has done this a million times so they know what is needed…It’s all the civil engineering. It’s a big book, a massive document. It’s a blueprint for what the track is going to look like with all the cross-grading and everything.”

So it’s a book that has all that civil engineering crap in it that everyone needs to know like grade levels and cross-grading and stuff like that..man..and we sprayed a few of the pages with Brut 33 by Fabergé in case Herbie Blash might be perusing it. Well, a promoter doesn’t make a civil engineer and just because Tavo isn’t up to par on “environmental engineering” or where to send the poop, that doesn’t mean he’s not one hell of a promoter and I submit to you that he is that and more because he has the rights to host the F1 race in America and I, for one, am damned proud of the guy!

Where many have tried and failed, at least Tavo is putting it all out there and making it happen and I don’t think anyone can marginalize that effort when attempting to purchase the rights to host a grand prix. Good on them I say and let the approval process begin because I want to meet up with Tavo in 2012 and shake his hand at the race.