Pole position is important at any race but with the long run down to turn 1 at the Mexico Grand Prix, Max Verstappen’s pole position may leave him exposed to the straight line speed of a brace of Ferrari’s just behind him.

Q1 for Saturday’s qualifying session unraveled in a relatively predictable manner with the Williams, Haas and Lance Stroll eliminated but the Renault’s and Toro Rosso’s managed to stay in the hunt for Q2.

Q2 was an interesting session is a much as the strategy was unfolding but there were a mixture of initial Medium compound runs followed by a final Soft compound run just to be safe in case the Mercedes, Ferrari or Red Bull’s were caught off guard. Several aborted final laps meant the top teams will be starting on the Medium tires as the Softs were just struggling through all Free Practice sessions.

Hometown hero, Sergio Perez, did manage to make it to Q2 but could advance no further in his Racing Point car while his teammate, Lance Stroll never saw the light of day in Q2. It was Sergio, the Alfa Romeo’s and Renault’s all falling short of getting into Q3.

Q3 saw the presence of both toro Rosso’s, despite Pierre Gasly having a dippy tummy that had laid waste to 90 or so people in the paddock. It’s like F1 went on a cruise and dysentery broke out. IT was a terrific performance but their inclusion into Q3 was revealing a storyline that should have foreshadowed the eventual outcome of the session.

At this altitude, the Honda engines were running on song despite being starved of oxygen. This in turn kept the toro Rosso’s competitive and the Red Bull’s challenging for pole position against the heavily favored Ferraris.

As it runs out, Max Verstappen’s superior chassis and low-oxygen Honda power were enough to set pole position with his teammate, Alex Albon in 5th. Both Charles Leclerc and Sebastian Vettel will start 2nd and third respectively.

Lewis Hamilton led the Mercedes challenge languishing in 4th but it was his teammate who piled it on the final turn causing a double-yellow which thwarted Vettel’s final run for pole. Something he felt he had a good shot at.

Valtteri Bottas was ok but the impact of the crash prompted the medical car due to the G-force alarm going off in his car. Quietly, while Renault are dog-whistling a full review of their participation in F1 as they sat idle in Q3, it was their customer, McLaren, who made the best of Renault’s engines for 7th and 8th.

McLaren quietly moved up the ranks and ahead of the Toro Rosso’s suggesting their chassis is decent and the Renault power was capable despite the works team being jettisoned at the end of Q2. 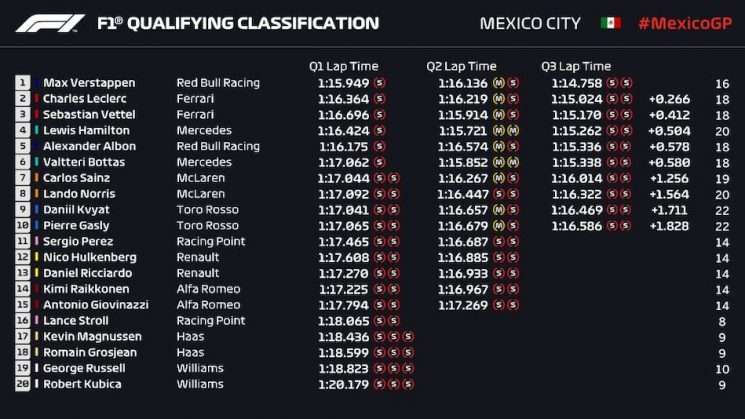 Three place grid penalty is not enough. Should have sent him to the back of the grid. After all isn’t F1 all about safety?

I have some questions about the Verstappen penalty that, I hope, will be discussed with Paul. 1. Track timing showed during Q3 VER was faster in the third sector on the second run than the first run although double yellow flags were out in sector 3 during the second run. Question 1. Why was this infraction not automatically flagged for steward review? 2. VER admitted in a post Q3 interview that he did not slow. Only then did the stewards react. 3. If a power unit component change occurs while in Parc Ferme control, a technical violation, the grid penalty… Read more »