All things, eventually, come to an end. Some sooner than later and others are never desired. Perhaps Red Bull Racing’s farewell to Sebastian Vettel is amongst those least desired but the time indeed came.

Vettel claimed four Championships with Red Bull, 39 wins, 66 podiums, 45 pole positions, 24 fastest laps, and 1,618 career driver’s points. He may be more low-key than other drivers and he may not have a big management company orchestrating his career but the young German has made an indelible mark of Formula 1 and Red Bull.

His farewell event at the factory was a difficult realization and time to say thank you from both sides of the table. Now Vettel looks south to Italy and his new team waiting in red work clothes by a car that sits vacant while mechanics remove the Alonso stickers from the side of the cockpit.

The detractors will have you believe that Vettel was handed all of his success, that he can’t pass people and only wins from pole position. They say he didn’t work his way up from the streets and was nursed by Red Bull’s junior driver program and isn’t the champion that his titles suggest. They say that Hamilton, Senna or Alonso are true greats but Vettel is a pretender to the throne of legends of the sport.

I say that’s all BS. You don’t win a race in a Toro Rosso and four titles and secure points in your very first race in a Williams/BMW by being a chump. This young man can drive a car and he is every bit as talented as his four titles would suggest.

Still, many will reserve their lukewarm praise until such time as he wins something in a Ferrari. Fair enough, you don’t like Vettel. Maybe Alonso is your guy or Hamilton—I get that and I really do appreciate that but I will say one thing, if he starts winning in a Ferrari after a couple years of hard work, will you start to believe that his trophy case is warranted? 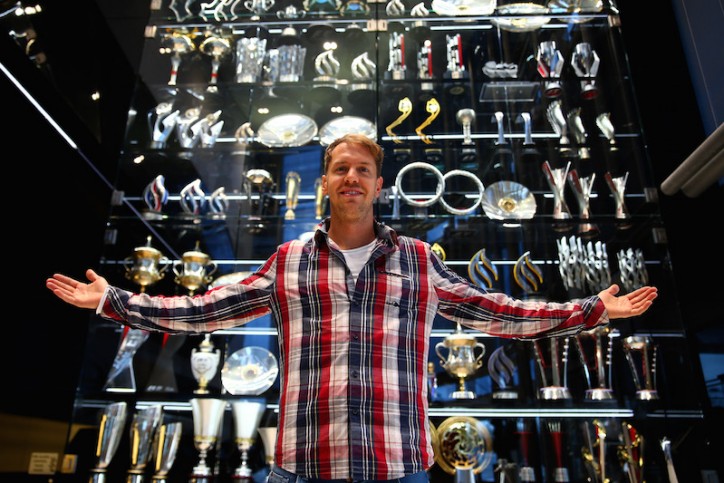 You may never become a Vettel fan and that’s perfectly understandable just as many were not Schumacher fans. I tend not to marginalize accomplishments just because a driver isn’t my personal favorite. I was a Prost Fan but you’ll never hear me marginalize what Senna did and who he was. I think Vettel deserves no less for his accomplishments in F1.

My friend over at NBC Sports, tony, did a nice job of recapping a few accomplishments in Vettel’s F1 career. You can check it out here.