Qualifying was going to be interesting as the conventional wisdom would suggest that Mercedes were the clear favorites for pole position, but Red Bull’s Max Verstappen led every practice session with an upgraded Renault engine and Ferrari brought an upgraded engine. Would anyone dare to push it too much and hit Champion’s Wall?

Romain Grosjean didn’t even get out for his first lap when plumes of smoke came out of his car as he drove down pit lane.

Ferrari’s Sebastian Vettel was quick out on track while Lewis took his time to make an initial run in Q1. Vettel on Hypersoft set the initial time at 1:12.110s. Lewis came out with 11 minutes left in the session. Ferrari’s Kimi Raikkonen took top spot briefly but Vettel, on a 5-lap run re-took the top spot with a 1:11.824s. Then Raikkonen re-took the top again.

Daniel Ricciardo set Red Bull’s first time with a 1:12.643s. His teammate, Max Verstappen, followed up with a 1:12.008s. Red Bull said they are giving away about three and a half tenths down the straights during quali.

Hamilton’s initial run had a moment of understeer and was 0.558 off the top with his teammate, Valtteri Bottas was 0.240s off the top. Marcus Ericsson broke his car by hitting the wall at turn 9.

Amazing watching Lewis get on the power very early at the apex trying to find time. Great fun to watch. Fernando Alonso and Stoffel Vandoorne mad a last-ditch effort to make it into Q2 and did so. Honrably mentions to Brendon Hartley who many feel is on the way out at Toro Rosso to answer those critics by making it through to Q2 while his teammate, Pierre Gasly did not.

Another big hat tip to Charles Leclerc who took his Sauber into Q2 as well.

Out in Q1: Grosjean, Ericsson, Sirotkin, Stroll, and Gasly

Once again, Ferrari quick out of the box but so was Mercedes. Ferrari brought a new power unit and Mercedes delayed theirs. Still, many felt that Mercedes had the shove to be favorites, but Ferrari did look to be on the pace. Both teams on the Ultrasoft tires.

Vettel took the top spot over Raikkonen with Hamilton slotting in third. Lewis’s teammate, Bottas, did find some pace and took top spot over both Ferraris.

Both Red Bull’s came out for their first runs on Hypersoft tires. Ricciardo was 6th but his teammate, Verstappen, took top spot with a 1:11.4s. Horner said Ricicardo was struggling with mid-corner to exit and his car wasn’t quite hooked up.

With three minutes left, Ferrari and Mercedes came back out on Hypersoft tires. Were the teams playing games and signaling a change in tire strategy or just covering strategies. Vettel came up for his final run but there were several cars slow at the final turn trying to give themselves a gap to the car in front of them and it ruined any potential final run for Ferrari. I would imagine the race stewards may be reviewing that situation with 4 or 5 cars going very slowly on the final turn.

In the end, both Red Bulls were on top of Q2 followed by

Out in Q2: Vandoorne, Alonso, Leclerc, Hartley and Magnussen. The Sauber of Leclerc was ahead of both McLarens. Not a good sign.

Q3 started with Mercedes and Ferrari out quickly on Hypersoft tires. Could Mercedes have enough shove in “Party Mode” to cover Ferrari’s PU2 performance gains? We would know in 10 minutes.

Lewis set the first time with a 1:11.227s with Bottas pipping him with a 1:10.857. Ferrari answered with Raikkonen in second behind Bottas just 0.238s off Bottas. Vettel tool top spot with a 1:10.776s. Lewis searching for his 7th pole in Canada was struggling back in fourth on his initial run.

The Red Bulls set their first times with Daniel Ricciardo on Hypersofts setting a 1:11.281s a half second off the top spot. That meant 6th place for Daniel and Verstappen slotted in at fourth place knocking Lewis Hamilton to 5th. Both Red Bulls and Lewis Hamilton to find something special in the final run. Down on power, the Red Bulls would rely heavily on the driver’s skill in the corners to make a effort for the second row.

With two minutes left in the session, Ferrari, Mercedes and Red Bull all came out for their final runs. Ricciardo and Verstappen were the last on track. Perez, Ocon and both Renault’s were on flying laps ahead of the leading pack.

Raikkonen’s lap was scuttled when he ran wide leaving him out of the equation for pole position. Lewis threw it all to the wind but will start 4th with Max Verstappen ahead of him an on the second row just behind Valtteri Bottas in 2nd.

Christian Horner said they had an outside chance for second row and it was down to the drivers to make it happen, Max made it happen. It was Ferrari’s first pole in Canada since 2001 when Michael Schumacher claimed it. 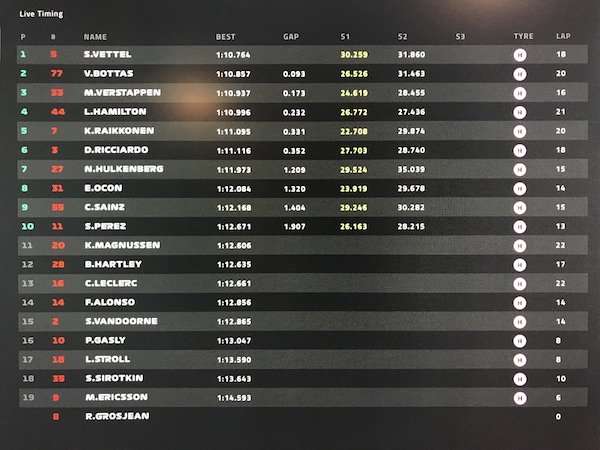 should be an interesting race, especially with the RB’s on the Soft tyres. ( i just refer to everything as soft, med , or hard) Hopefully they will both make places at the start and then we can have an intriguing battle of tactics for the rest of the race. Feel sorry for RoGro, as he was best of the rest for practice. Hopefully he can keep it clean and make up spots, we all know he needs it. I hope Hartley has a good race too, Honda upgrade seems to be working well.

Agreed. Could bottas be the spolier? How about Max on Hypersofts? It may be interesting and there’s that 3 DRS thing too. :)

Yeah Bottas has it really hooked up. He’s actually my pick for the win. I hope Max can keep it clean, but i have a gut feeling the wall will find him.

If RBR are starting the race on Hypersoft’s, does anyone know what’s the time delta for them compared to the Ferrari and Mercedes who are on Ultrasoft’s? And what’s the difference in the number of laps that the Hypers can run compared to Ultra’s? It looks like unless RBR can get past a few cars (in Ver-crash-en’s case, Bottas and Vettel), or can magically run much further on Hyper’s than others, that they’re not going to get any advantage from starting on hyper’s. And if Ver-crash-en is out to make up places in the first few laps, there is going… Read more »

reading an interview with badger boy, the long runs on the hyper were very good and promising for rbr. They seem to be able to get more out of them than the other teams. He says they will hopefully one stop.

So it turned out, the Hyper’s didn’t last long, and didn’t give any real lap time advantage.
I wonder what Red Bull had hoped they could do?

It seems to me that the last few race weekends the softest tires are not giving any advantage in time as compared to the harder compounds. Could it be that the teams are managing the race more than they are pushing?

I think you’re onto something there SubC.
The softest tyres are great for qualifying, a few laps, with minimum fuel load, but wear too quickly under full fuel load to give a significant advantage.
They do provide much more advantage when used towards the end of the race, such as Bottas chasing down Vettel at the end in Bahrain.

something different. They actually went longer than i thought. You could argue they gave badger boy an advantage to make the overcut on Hamilton Hamster. With a short run to turn 1 they didn’t even give them an advantage at the start.

The laps behind the safety car helped the longevity of the Hyper’s.
I think they did help Ricciadro’s overcut on Hamilton, but not as much as Hamilton’s overheating problem and resulting early stop.

Lewis may have taken pole position during Q3 in Canada. If it wasn’t for the remains of a bird that was later found in his brake duct.

Lewis may have won pole position at Canada during Q3, because he was faster than Vettel until his lockup going into the hairpin, which may have been caused by the remains of a bird that was found in his brake duct

LOL, it wasn’t a good weekend to be an animal in Canada, was it?