There was a haze and hovering clouds in Hockenheim for qualifying but the track was drying out from a previous rain. That wasn’t going to help Daniel Ricciardo who entered qualifying for the German Grand Prix with an engine penalty.

Williams was first out and were hoping their new wing would pay dividends. Sauber followed on purple-stiped Ultrasoft tires. There was still some weeping spots on the track from the previous rain and in particular turn 9 off line. The curbs and AstroTurf were still very damp.

While Fernando Alonso set his first time, his teammate, Stoffel Vandoorne, was having problems with the gearbox and shifting. This adding to what the Belgian called his worst Friday session in his career. Both Ferrari and Mercedes made their initial runs on the purple Ultras.

What developed was an interesting back-and-forth between the Sauber of Charles Leclerc and the Haas F1 cars. Two Ferrari-powered teams taking full advantage of the Italian shove in the back of their cars battling for best of the rest.

Lewis Hamilton had a few ragged laps over the curbs very roughly and then radioed that he was stuck in 4th gear and jumped out of his car to push it back to the pits. He eventually had to stop on track with the marshals backing his car into an opening in the wall. Hamilton out with a hydraulics issue. Fourteenth looked to the be his best hope for a starting position.

Haas out early setting the initial time of 1:12.523s with Kevin Magnussen and Romain Grosjean. Bottas took top time on his banker lap at 1:12.152s followed by Max’s Red Bull on Yellow soft tires down in 5th. Marcus Ericsson had an off but kept the car going to get out of the gravel trap bringing a lot of gravel back on the track. It prompted a red flag and spoiled hot laps for Verstappen and Sainz.

The session restarted with a handful of minutes left. Ericsson was back out to set a time but all eyes were on Red Bull who switched Verstappen back to Ultrasoft tires leading Sky commentary to wonder if the red flag hadn’t changed the Dutchman’s strategy.

Ferrari were first out for their banker lap as dark clouds began to encroach on the circuit. Bottas led Q2 so Ferrari had some work to do.

Raikkonen set the top time with a 1:11.880s with Vettel taking top away from his teammate with a 1:11.539s. Bottas managed to wedge his Mercedes between the two Ferraris and Max Verstappen slotted in 4th. Grosjean and Magnussen set 5th and 7th fastest. The magic continued for Charles Leclerc setting 8th fastest time in Q3 just behind Nico Hulkenberg.

With 2:30s left, the teams came out for their final runs. Vettel on provisional pole followed by Bottas and Raikkonen. The two Finns set the same first sector times with Vettel two tenths faster.

Bottas set provisional pole but as Vettel came across the line, he ruined the mood at Mercedes with a 1:11.212 which was a new track record and good enough for Pole position. The podium will be Vettel, Bottas, Raikkonen. 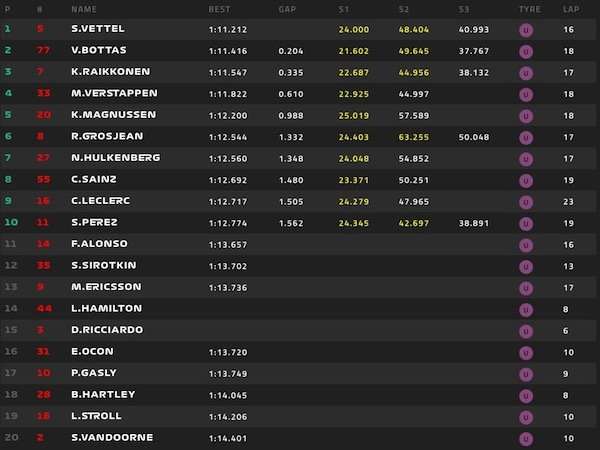 Will be fun watching Hamilton and Ricciardo come up thru the pack.

This is looking like one of Hamiltons ‘off weekends’, the suspected illness ahead of FP3, the ragged car damaging Quali session. Perhaps the emotional aftermath of landing that megabucks new contract? The qualifying pace gaps between Ferrari/Mercedes, back to RBR, then Renault/Haas/Sauber/Force india, probably mean its going to be a straightforward race, unless things get ‘touchy’ off the start, or there is rain. Interesting to see Magnussen has out qualified Grosjean, he’s definitely having a very strong season. A good run off the start could see three of F1’s fiestyest contesting the first corner, and Ver-crash-en hasn’t made contact with… Read more »

The Sky commentators were getting hyped up when Le Clerc topped the FP3 times “remember where you were the day LeClerc won his first FP session, he’s a world champion in the making”.
Completely ignoring the fact that until the last lap the session was headed by Sirotkin in a Williams, and LeClerc’s team mate in the other Sauber was a fraction of a sec behind him, does that mean Sirotkin, Ericsson are also probable future world champions?

They have been working overtime to hype SharLeclair. Anything to try and Hamilstring Vettel and keep their boy out front.