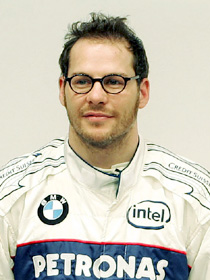 I know what you’re thinking, but – sadly – this isn’t the Canadian equivalent of a Juan Pablo Montoya Tweet describing some tasty morsel of meat.

Jacques Villeneuve has been spied in East Anglia, enjoying a pub lunch with “a Lotus executive” at the – perhaps aptly-named – Bird in Hand, a Norfolk pub a few miles away from Lotus’s Hethel Headquarters. Local paper the Norwich Evening News (or more likely one of their readers) spied the 1997 World Champion enjoying a fillet steak.

Pub manageress Lizzie Brake said his arrival at the watering hole at about 1pm surprised guests and staff alike.

She said: â€œIt was quite a surprise. We all got his autographs. He was here for about one and a half hours, and we think he left to go back to Lotus.

â€œHe was with another Canadian, an American and a lady from Lotus. He had a fillet steak.â€

A Group Lotus spokesman told the Evening News: â€œWe do not comment about any guest visits to Lotus, particularly private ones.â€

The article goes on to reiterate what we already know – Mike Gascoyne has stated publicly that he has talked with Villeneuve, Villeneuve has responded in kind, but insisted that discussions are “preliminary” at the moment.

And now we know that they have met again.

So, are we slipping into the twilight zone? Does JV really have a Bird in Hand? Or, with USF1 still on the lookout, could he even have two in the bush? And which is better?