For the longest time, going to the Indianapolis Motor Speedway meant one thing, and one thing only: The Indianapolis 500 Mile Race. Don’t worry about the fact that the first event at the venue was actually a balloon race, or that the first motor race was a motorcycle race in 1909. Traditionalist have always clamored that having anything other than the 500 at IMS is detrimental to the venue and to the 500. Bah! Over the years, the Hulman-George family have been steadily adding to the number and variety of events at the famous racecourse. The first to be added was NASCAR racing with the Brickyard 400, then the short-lived Formula 1 United States Grand Prix, followed by the MotoGP Red Bull Indianapolis GP, and this past year with the IndyCar Indianapolis GP which opened the Month of May. While many of those events are, or were, exciting and have done nothing but add to the venues coffers, the best addition to the schedule of events at IMS this year was the vintage race held in early June. 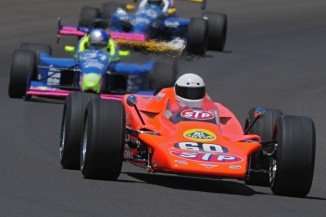 The vintage racers are coming back to Indianapolis in 2015 from June 11th through the 14th. Last year, they raced various classes on the infield road course, and held at-speed demonstration runs of many of the vintage Indy cars on the oval, including the famous turbine-powered Lotus 56. Vintage races are amazing events. It’s like a rolling car show! You have the aspects of a car show in that you get to see a wide variety of classic machines lovingly cared for and preserved by their owners, but you also have the exciting aspects of motor car racing. Seeing these classic machines not on parade but out on track being driven as they were intended to be driven, with gusto and in competitive anger, is an awesome sight. Cars were meant to be driven. I have no patience for trailer queens. At a car show, I want to see some bugs caught in the radiator. I want to see the heat-induced discoloration of your exhaust pipes. I want to see that you actually drove your car to the show! Likewise, when it comes to vintage racing machines, it’s neat to see the old, often sketchy, beasts in a museum, but it’s even better to see them on the track and being raced!

The Sportscar Vintage Racing Association’s (SVRA) Brickyard Vintage Racing Invitational will return to the Indianapolis Motor Speedway for the second consecutive year, with more than 500 of the world’s finest and most historic racecars competing on the recently reconfigured road course and running exhibition events on the famed 2.5-mile oval from June 11-14, 2015.

The races will showcase a wide variety of cars including those that competed in past Indianapolis 500s, in the NASCAR Sprint Cup and Nationwide Series, Formula One, Grand-Am prototypes and Trans-Am. In addition, American racing cars from makes like Chevrolet will compete with historic racecars from Ferrari, Porsche, Jaguar, MG and many others in 12 different classes of racing. A special class will also feature open-wheel racecars with Indianapolis 500 or other historic racing backgrounds. 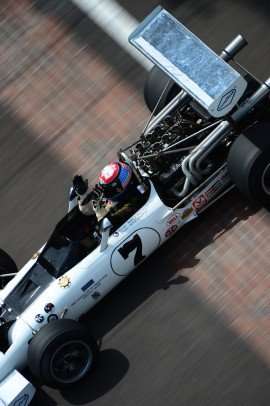 Racing at IMS will be virtually non-stop each day from 8 a.m.-6 p.m. The cars will be on display in the infield and open to all fans providing up close access to the racecars.

“Indianapolis Motor Speedway fans appreciate and enjoy the history of racing and the Brickyard Vintage Racing Invitational showcases great historic racing cars in a setting unlike any in the world,” said J. Douglas Boles, Indianapolis Motor Speedway president. “The positive feedback from fans and drivers after following the inaugural event earlier this year was overwhelming and the 2015 event will be even better! In addition to the great racing on track, the fan access to these historic racecars, owners and drivers makes this a must-attend event for anyone that enjoys racing or cars. This will quickly become one of the best events of its kind anywhere in the world. ”

The Sportscar Vintage Racing Association is one of the oldest and largest of the vintage racing organizations in the United States. Originally called the Southeast Vintage Racing Association and founded in 1981, the organization has become the premier vintage racing organization in the United States with more than 1,500 members. Over the years SVRA has conducted Vintage events at legendary race tracks throughout the country including Sebring, Road America, Watkins Glen International, Mid-Ohio Sports Car Course, and Circuit of the Americas.

“We are extremely pleased and excited to return to the Indianapolis Motor Speedway,” said SVRA President and CEO Tony Parella. “The event was phenomenal this year and we’re definitely looking forward to building on that success next season. The fans in Indy are so knowledgeable and interested in vintage cars, the culture and racing in general that it’s an absolute honor to come to town and share our love of vintage sports car racing with them.”

A complete racing schedule for the Brickyard Vintage Racing Invitational will be announced at a later date. The event will begin with a practice day on Thursday, June 11, with free admission for everyone, with racing throughout the weekend beginning on June 12.

Fans have three quick, convenient methods to buy tickets:
– Online: Visit http://www.ims.com/tickets. Tickets are available 24 hours per day, seven days per week.
– Phone: Call 800-822-INDY or 317-492-6700 between 8 a.m.-5 p.m. (ET) Monday through Friday.
– In Person: Visit the IMS Ticket Office at the IMS Administration Building at the corner of Georgetown Road and 16th Street between 8 a.m.-5 p.m. (ET) Monday through Friday.
Tickets for groups of 20 or more also are available. Contact the IMS Group Sales Department at 866-221-8775 for more information.

Information on parking and camping at IMS events is available at http://www.ims.com/tickets.